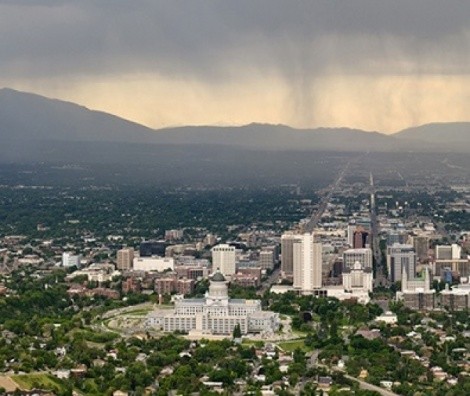 Salt Lake City is starting to see through the smog. In a recent Moyers & Company report, Salt Lake City ranks among the top-12 cities leading the way for environmental sustainability.---

According to the report, Rocky Anderson, mayor in SLC until 2008, is championed as the man who began it all. The Moyers & Company article states, “Rocky Anderson, who left office in 2008, established the Salt Lake City Green program, which aimed to reduce the carbon emissions produced by city government buildings by 21 percent over the course of a decade. By Anderson’s last year in office, the city had exceeded its goals and reduced emissions by 31 percent.”

But that's not to say some kudos weren't given to current Mayor Ralph Becker, whose term has focused heavily on alternative energy. “The mayor who followed Anderson, Ralph Becker, has continued efforts to green the city by installing solar-powered parking meters throughout the downtown area,” the article also stated.

The GREENBike Program in downtown Salt Lake City is also a product of sustainability. The nonprofit bike-sharing system makes traveling downtown easy and green. Members can, for a set membership fee, rent bikes at numerous stations for transportation use in the city.

Furthermore, another sustainability program reported in the Utah Division of Air Quality 2012 annual report, the Utah Clean Diesel Program, begun in 2008, reduced emissions by over 25,000 tons.

However, in the American Lung Association’s 2012 Report Card for Salt Lake City, the county received an ‘F’. A large warning accompanies the report-card grade, reading, “If you live in Salt Lake County, the air you breathe may put your health at risk.” Needless to say, these sustainability initiatives are quite necessary for the state.

Moyers & Company is a corporation created by renowned journalist Bill Moyers. The company aims to provide a forum for journalistic democracy on issues of economics, environmentalism and politics. They chose the top-12 cities based on local legislative initiatives and inventive plans for improved sustainability.