This West Valley Man Is Forming A Go-Kart Posse [Video] 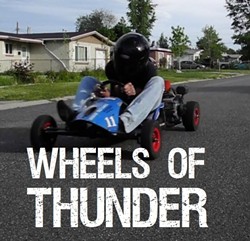 People like to throw around the phrase “DIY” as if assembling a coffee table from Ikea qualifies you to be the third member of A&E’s Mythbusters. But I think it's safe to say that the phrase “Do it yourself” takes on a bigger meaning if you’re the type of person who spends your weekends terrorizing your neighborhood with a fleet of homemade, hot-rod-inspired go-karts.---

Kelly Wood lives his life a quarter mile at a time.


It’s called “street-kart racing” and to be blunt, West Valley City resident Kelly Wood just wants you to join his street-kart posse. ‘I really just want to get together with a bunch of guys that can put together whatever they got at the time and do some street racing,” said Wood. To find out what exactly street-kart racing was all about, my buddy Mike and I visited Wood at his West Valley home last Sunday evening:

Despite the fact that there are roughly seven street carts at his house, Wood has only been down with this hobby for a mere nine months -- which is remarkable, considering that all of his sleds have been pieced together from scraps found on Craigslist and KSL. “I pick up spare parts from here and there, go home, play Junkyard Wars and then throw it all together,” claims Wood. I should also mention that every one of his custom-built carts has cost him less than $200.

This one is called “The Sarge.” It’s an homage to Wood’s service in the Iraq War. The number on the cart is the same number that was on his truck in the military.


To say the least, Wood is an inspiring individual -- his website KartRods.com was coded entirely on Microsoft Notepad, and when his fingernails aren't greasy, broken and bloody from tinkering around with his karts, he's building miniature cities made of toothpicks and rocks with his 14-year-old daughter. Apparently, the Utah Arts Festival wouldn't allow Wood to enter his mini creations; why is beyond me: 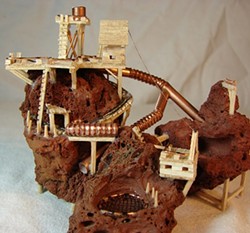 You can check out more of Wood’s creations at his other website, ReflectionaryArts.com


As you can see, Wood is the type of guy who has a lot of side projects. But right now, it's all about the street racing -- it's in his blood. “My dad was a real greaser," says Wood. “He taught me how to a build hot rods, and today, people think hot rods come in kits, but they don’t. You have to piece ‘em together like these karts.

If you're worried that your kart won't be as sweet as one of Wood's creations, don't worry; it doesn't matter. "They don’t have to look like this," pointed out Wood. "If you want, you could cut out a Hello Kitty trash can and throw it on there, that’s fine. It’s all about not being inside on your cell phone.” That is, of course, unless you can drive one of these while talking on your phone: