We Made A Statue Out Of 100 lbs Of Doritos, Because Art | Buzz Blog

We Made A Statue Out Of 100 lbs Of Doritos, Because Art 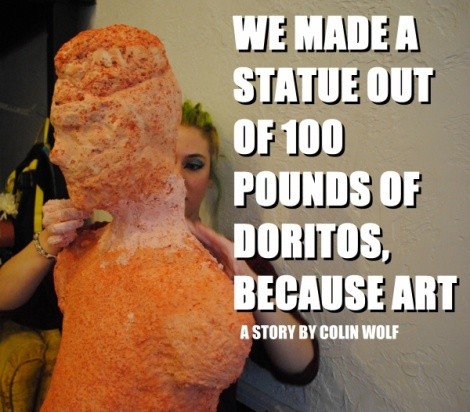 History's greatest achievers have always looked to artists to ensure their image is super badass long after they're dead. So, like Napoleon, Liberace and King Tut, who live on via golden tombs, chiseled stone and oil paintings, I asked a Utah artist to create a statue in my likeness ... made out of a shit-ton of Doritos.—-


It all started a few months ago, when I came across a mysterious ad offering a hundred pounds of Chile Limon Diminitas Doritos for $100 on Craigslist. Though the price seemed a little steep, I couldn't help but wonder what my life would be like owning a mountain of Doritos. After weighing the pros and cons for about five seconds, I decided to pull the trigger and contact this veiled internet snack dealer.

Because I'm not 100 percent sure if his racket was legal, we'll just call this guy Chuck. He owned this kingly amount of chips because he'd figured out a way to flimflam an online promotion for free Xbox Ones. Essentially, he would purchase pallets of Mountain Dew from local wholesalers, remove the promotional codes and trade the loose cans to some convenience-store owner for bags of Doritos that also had codes. Eventually, after hours of emptying chips from their bags and entering codes on the internet, I guess he accumulated a grip of  "free" game consoles.


Anyway, my roommate Mike and I met Chuck at his house in Lehi. The chips where in his living room, sorted into four white kitchen trash bags. "So, what are you gonna do with 'em?" he asked.


"I don't know, maybe make a statue of myself made out of Doritos."


He looked at me with a blank stare. "Ha ha, OK ... man ... cool." I managed to haggle the price down to $20 because I think he realized no one else in Utah could possibly give a singular turd about slightly-pawed-at garbage-bag chips.

After helping us cram the goods into our car, Chuck showed us his "Dew Dungeon," or garage, where he stored his processed (decoded) Mountain Dew. "It's a lot of work, but it really starts to pay off when you sell your fourth or fifth Xbox on eBay." As he explained the ins & outs of his chip & soda racket, a silver suburban pulled up and backed into the driveway.

The doors opened and a tall woman with massive fake boobs and platinum blond hair stepped out, along with a short, middle-age Hispanic dude in an Affliction shirt so intricate it resembled a coat of armor blessed by Renaissance monks.

"This has to be his chip connect," I said to Mike. The power couple walked around to the back of the whip and popped the tailgate, exposing a dozen or so large cardboard boxes. "Who likes Dinimitas, huh?!" said the little chip boss. 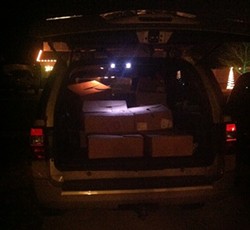 The two men maneuvered their goods between the suburban and the garage while Mike and I stood in the driveway listening to the blonde talk about how she pays her kids in Monster Energy drinks to sit in a room all day and enter her codes online. After a half-hour of hearing how "easy" it is to scam Xboxes, we decided to head back to SLC with a trunkload of gross, almost-inedible Doritos.


The chips sat in our garage for a couple months while we hatched a plan. This was a big decision. I mean, really, what would you do with 100 pounds of Doritos? Here's what we came up with over that time:


- Repackaging them into brown-paper bags and selling them to neighborhood kids.

- Burn them in a barrel.

- See how long I can survive on nothing but Doritos.

- Feed them to geese in Liberty Park...and study the geese.

- Create new and exciting Doritos-inspired cuisine and sell the idea to Taco Bell.

- Pack all of them into a giant beanbag and document me sleeping on it every night.

- Break them down to powder and attempt to construct one giant chip.


Though some of these ideas were solid gold, we decided to stick with our original scheme. We were going to make a grotesque "David"-like statue of myself ... you know, to symbolize consumerism or child obesity or whatever.

We hit up our friend and local artist Meredith Thomas, who currently specializes in zombie Barbies and sculptures made with dead animals, to see if she could help us out. Since this particular project was the perfect level of WTF, she was immediately onboard.

You should know that up until now, no one has created a full-size Dorito man, so every aspect of this project was touch and go. As it turned out, creating a full-body cast of my skinny-fat body was too much of a pain in the ass, so Thomas found an extremely feminine headless mannequin and filled it with a 10-1 plaster-to-Dorito blend. It had a nice, chunky, barf-like consistency.

To make the head somewhat like my own, Thomas wrapped my dome in clear packaging tape, a la Darkman, and used that for a cast. The tape-mask sort of resembled a face ... not my face, but a face nonetheless.


Well, after 20-plus hours of mashing chips and mixing plaster, Thomas finished the Dorito de Milo and it was perfect.
Besides the fact that it has a woman's body, had a flattop and looks like a chip version of Grace Jones in A View To A Kill, it still sort of looks like me. Well, it definitely has my hips, jowls and posture.


If you want to see this work of art in-person, it'll be at the City Weekly offices for the next couple weeks—or at least until a co-worker destroys it out of disgust.