Hello to all you hot-dog buying, graveyard-decorating, soldier-saluting, everyone-gets-a-Monday-off-but-us enthusiasts! --- Yeah, Memorial Day is coming up nine days from now, and that's really all I've got for this blog intro. Hey, they can't all be winners, but at least I'm honest! In lieu of an update to the 337 Wall, here's some random artwork from downtown SLC.

Over the next two weeks we got a ton of events to check out, first starting on Sunday where the Urban Flea Market will return to SLC. This is a monthly market where you can buy and sell junk/hidden treasures, but most people find it more fun to trade. Go take some of your items to the market and see what you can trade for.

Moving up to Wednesday, the Salt Lake Dream Team will take over Mestizo Coffee to present a free workshop on Social Media. If you're a band, filmmaker, artist or just a business, you need social media in this day and age, and these guys are gonna show you how to turn it to your advantage. This is a must for anyone looking to promote their work better than they already have, and it's totally free!

Going to next Saturday, an event I can't speak much on (being a SLUG Magazine employee by day), but if you're into cycling, you definitely need to check out the SLUG Cat, a bicycle race throughout the streets of downtown SLC. Sign-ups start at 4 p.m.at Saturday Cycles, should be an awesome race!

When that race is over, you can either hit up the after party at Diabolical Records, or you can head out to Saltair where NOW-ID will take over the venue for Feast. This is gonna be something special where they'll have multiple forms of performance art and music going all night long, complete with food trucks outside to keep the night going. Go to their website and check out everything they're going to have.

Next Sunday, the Geek Show Podcast will take over Brewvies again for another free Movie Night. This month they celebrate the awesome (but small) catalog of Beavis & Butthead and King Of The Hill creator, Mike Judge. A double-feature of Idiocracy and Office Space which kicks off at 5 p.m. The films are free, but the food is not, so tip the waitstaff well.

The majority of next week is mostly concerts and minor events from the usual suspects until we get to the Saturday two weeks form now. The first of two you should be checking out is the Get Into The River Festival, which will be a major effort to highlight the community along the Jordan River and Parkway. From 10-2 you'll find activities all along the river in what's been mainly referred to as the River District. Hit up their website for more details. 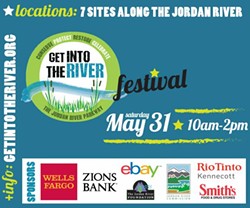 And then that night the Salt City Derby Girls return to action and kick off their 2014 season with the first banked-track event of the year. We'll see brand new skaters and teams from the league as The Wrist Guards will take on The Razor Blades. Doors will open at the Salt Palace at 6 p.m. with game time at 7 p.m., hit up their website for ticket information.

As for the blog... it's going to be an interesting couple of weeks as we check out Gallery Stroll, check out a show from Kilby Court, explore parody in journalism, interview a new podcast, check out an illustrator's work and see some bags made in Ogden. At least, that's the plan, who the hell knows how things will go. As always, we'll see what happens.