The birth of a child is a special moment, one that parents like to cherish forever, so why not remember this blessed event with an artsy picture of your kid's umbilical cord? Well, now you can thanks to Salt Lake City couple Stephanie and Keith Duffy.

When their first child was born in 2009, Keith, who is medical doctor with fellowship training in pathology, decided to take a sample of the umbilical cord and look at it under a microscope. After dying it, he and his wife decided it would be the perfect art piece to hang on their wall as a reminder of that special moment. By 2012, the idea had blossomed into a popular small business, Little Cord Art, with their own laboratory located in Salt Lake City. 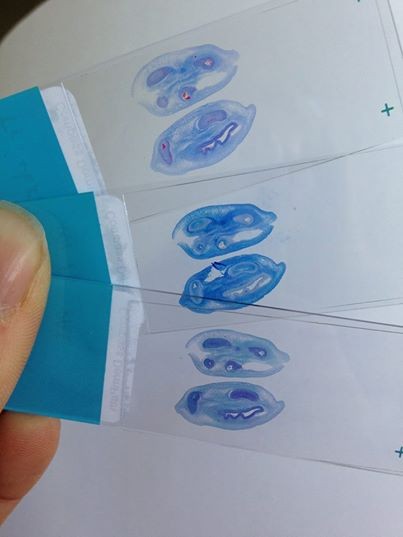 “It’s the same process a pathologist would use to find a disease,” said Stephanie in a recent phone interview with City Weekly. “We just use that process more artistically.”Creating umbilical cord masterpieces isn't nearly as gross as it sounds. Say you have a baby, the doctor delivers the baby and takes a small sample of the child’s umbilical cord and puts it in a special container, which you order before your baby is born. You then send the container back to Little Cord Art with the cord sample. Once the cord is back at the lab, they dye the tissue whichever color you choose and magnify it 400 times the original size. What you end up with is a canvas that looks a lot like one of those Magic Eye pictures from the '90s.

Little Cord Art has been featured on many pregnancy and parenting websites, like TLC's "Parentables," as well as sites like Huffington Post and Daily Mail. “It’s a lot of fun, honestly, making a business out of it is just a bonus,” Stephanie says. Creating art from your child umbilical cord can cost you as much as $600 for the largest canvas, but Stephanie says it's worth it and is "much prettier than [keeping] a shriveled up piece of umbilical cord."

Most of Little Cord Art's customers have come from outside of Utah, usually through midwives rather than traditional doctors. Stephanie says that their idea has received a fair amount of negative comments on social media, but that every customer they've had has been pleased with the results. “Once people buy from us they are into the idea," Stephanie says. "It’s more the naysayers who just think that it’s weird."