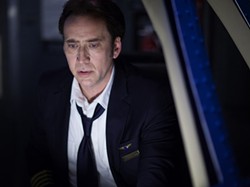 Faith-based dramas and demon dolls are part of a busy week for new releases in Utah theaters.

Scott Renshaw wishes only his clothes were left in the chair to watch the lumbering apocalyptic disaster of Left Behind (pictured), while the period Mormon drama 16 Stones turns a quest for scriptural relics into earnest cinema-as-pudding. And opening at Ogden's Cinema 502, the zombie comedy Life After Beth wastes Aubrey Plaza's funny performance on a story with no bite.

Danny Bowes discovers that The Conjuring prequel/spinoff Anabelle is—surprise, surprise!—a cynical knock-off with no production values and no scares.

MaryAnn Johanson finds wonderfully weird appeal in 20,000 Days on Earth's faux day-in-the-life of musician Nick Cave, but laments the message of Hector and the Search for Happiness that rich white people are the ones with real problems.