Today is the anniversary of UVU's insane 2004 Michael Moore War 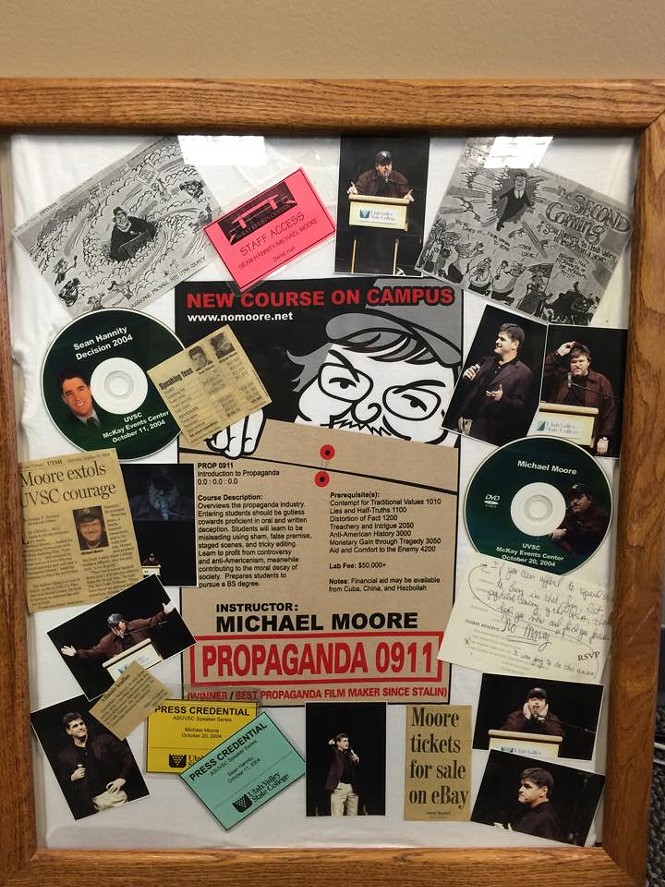 A few months before, in June 2004, Moore had released his documentary Fahrenheit 9/11, which criticized George W. Bush and the invasion of Iraq. And, being one of the more conservative counties in one of the most conservative states in the nation, Utah County threw a fit over him being invited to speak at the school.

This Monday, Oct. 20, marks the 10-year anniversary of Moore’s visit, and UVU’s college of humanities and social sciences will be holding a symposium to reflect on the uprising and academic freedom on college campuses. There will also be a showing of Steve Greenstreet's documentary This Divided State, which chronicled the events of fall 2004.

The decision to book Moore was made by UVU's then student body president, Jim Bassi, and his vice president, Joe Vogel who soon faced backlash from fellow students and community members.

“There was a huge response” Vogel says, “A lot of it was in support, but there were some death threats as well.”

One member of the community, Kay Anderson, offered $25,000 out of his pocket to buy back every ticket the school had sold to Moore’s event to keep him out of Orem. The school did not accept.

Vogel says that he thought Anderson’s stunt was a bribe, and their decision to move forward with Moore’s speech “really became a matter of principle.” 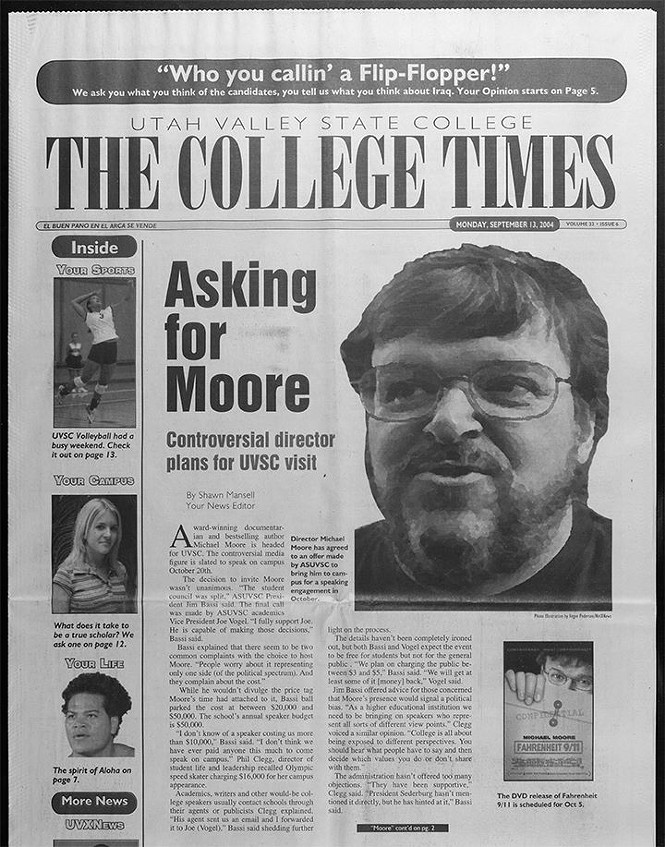 But, Phil Gordon,an Associate Professor in the communication department says, “It wasn't only Anderson; he was speaking for a significant percentage of the community. I don’t think it was a bribe, [but] it was a weird stunt.”

In a bizarre attempt to ease the tension, the school’s administration decided to bring in Fox News’ Sean Hannity. Hannity offered to waive his $100,000 speaking fee but asked the school to pay for his travel expenses, which totaled nearly $50,000.

“It didn't surprise me a lot; Sean Hannity was kind of high maintenance and it did end up at least as much as Michael Moore’s [speaking fee],” Vogel says.

Bringing in a conservative voice to counter Moore’s liberal views didn't appease Anderson, who ended up suing the school. Although Anderson later dropped the suit, student leaders were still affected. “I was forced out of my position of vice president because of Kay Anderson’s lawsuit,” Vogel says.

Vogel, a junior at the time, had to find another way to pay for his final year of schooling, since his scholarship from the position had been revoked. He says that he and Bassi “both got a crash course in politics, especially Utah politics and free speech as well.”

Despite all of the tension, the experience helped the school grow, says Vegor Pedersen, the editor in chief of the school’s newspaper at the time. “The way I see it is that we would not have moved to University [status] as quickly as we did had this not happened” Pedersen says “Even with all the tumult that it caused.”

Gordon notes that while “clearly, Monday’s event will be more peaceful" than 2004's, "on the other hand, look at what just happened at Utah State. These issues remain relevant.”