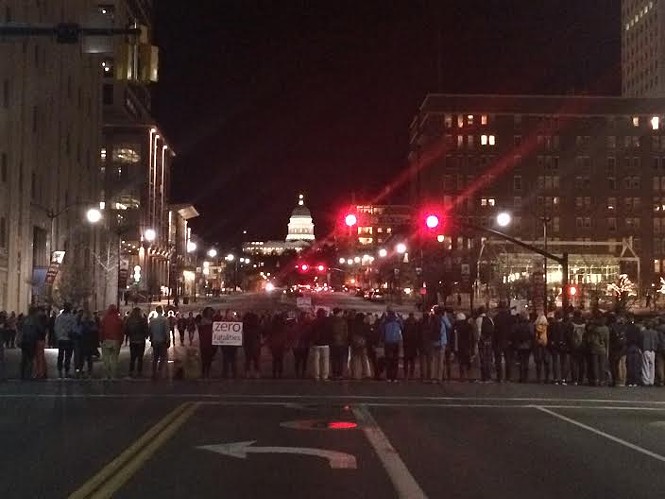 With the chant “Fuck the Police” as a preferred verse, more than 1,000 protesters marched through Salt Lake City on Monday, clogging the city’s busiest streets and ensuring that their calls for reductions in police violence were heard.

The march came on the heels of a police shooting that left a 17-year-old boy in critical condition. It was the third incident of violent force by the city’s police in the past month, prompting city officials, including the chief of police, Mike Brown, to call for reform.

On Monday afternoon, Brown met with reporters for an informal round-table discussion on police violence. He spoke of his efforts to insert a more vital community presence in policing, and he said that after the shooting, he reached out to the boy’s family.

Brown wept as he talked about the boy, Abdullahi Mohamed, who was shot. Brown said he accompanied the boy’s mother to the hospital where he watched her clutch the boy’s limp hand.

“From there, I told this mother that I was sorry and asked how to heal and mend this community,” Brown said, adding later that his sorrow for the boy and his family is not necessarily a reflection of one side of the issue being wrong, but that “right, wrong or indifferent, you can say you’re sorry.”

Brown also said he gathered at the boy’s home, where he addressed Mohamed’s family, which emigrated to Utah from Kenya when Abdullahi was 11. “I think they were very appreciative and very humbled that we would come and talk to them,” Brown said.

If Brown’s words were meant to soothe a community that has grown increasingly angry over the spate of violent incidents involving police, it was not heard.

The protesters gathered at 6 p.m. at 125 S. State St., in front of the Wallace F. Bennett Federal Building. As speakers addressed the crowd through a bullhorn, the protesters chanted “Black lives matter,” and “Our community, our control.”

Selam Mohamed, a friend of Abdullahi, told the crowd that he watched the police shoot his friend. “We’re all human, we’re all equal,” Selam Mohamed yelled.

Lex Scott, an organizer with the group Black Lives Matter, told the protesters that Brown spoke to her by phone before the protest, pledging that he would attempt to stop police brutality in Utah.

Scott, who said she has marched in police protests across the country, said the phone call from Brown marked the first time she’s ever heard from an officer on the topic. “I have never heard a police officer ever tell me that they will stop police brutality,” Lex said to cheers. “Are we going to hold him to it?”

Details surrounding Saturday’s shooting remain scant. According to a police news release, a pair of officers were responding to an unrelated incident near the block of 250 S. Rio Grande St. when they spotted a pair of men beating a man with metal poles.

The officers asked the men to cease, and one of them complied. The second person, police said, continued to beat the victim and was shot by officers.

The neighborhood where the shooting occurred is home to the city’s homeless shelters. It is also riddled with drug dealers, who Brown said are organized and methodical, peddling heroin on shifts and in crews, careful to never carry too much dope or cash.

Brown would not say why Abdullahi Mohamed was in the neighborhood. And he declined to release the condition of the man who police say was being beaten with the metal pipes.

The shooting is being investigated by the Unified Police Department, which provides policing services to many communities across the Salt Lake Valley and is overseen by Sheriff Jim Winder.

In a news release, Salt Lake City Mayor Jackie Biskupski, who prior to being elected, worked for Winder, said she has “complete confidence in the Unified Police Department, who is leading the investigation, and District Attorney Sim Gill, who will make an ultimate decision in this incident.”

“I am cognizant that this is the third significant use of force incident for the Salt Lake City Police Department in the last month,” Biskupski wrote in her statement, which was released Sunday. “This morning, I had a serious conversation with Police Chief Brown and members of his team to review details about each of these incidents, including a discussion on training and whether de-escalation efforts could have been implemented.”

While Biskupski noted the sadness and tragedy surrounding the event, the lack of support in her statement for her own police force was noted on Monday in an interview with Ethan Millard and Jay McFarland who were hosting the Doug Wright Show on KSL News Radio.

After saying that “we do have an excellent law enforcement agency,” Millard asked why this sentiment was absent from her statement. In answer, Biskupski said: “You know what, I have to go,” and apparently hung up the phone.

The protesters vowed to flood the March 15 city council meeting to let Biskupski and other city leaders know how they feel. Gregory Lucero, who helped organize the march and led the protest, said he wanted the meeting to last until midnight.

When the protesters finished listening to speeches at the federal building, Lucero said through the bullhorn that he intended to take a walk. He led the crowd out into the middle of State Street. The crowd followed, blocking the southbound lanes.


Police officers on motorcycles moved ahead of the marchers, blocking traffic at each intersection.

The march turned east on 400 South, and then banked south on 300 East before halting for a short time in front of the public safety building.

Some marchers smashed railings along the 400 South Trax line and hopped atop cars halted at intersections. At least one scuffle broke out amongst marchers.

In front of the public safety building, the smell of marijuana punctuated the night air, and the rally cry of “Fuck the Police” grew ever louder.

Back on the road, the marchers headed north on 300 East. Residents of the Embassy Arms and Embassy apartment buildings gathered on their balconies to watch the marchers, who stretched for an entire city block, flood past.

The marchers turned west on 100 south, where some yelled their angry chant at officers and held up their middle fingers before returning to the federal building. Lucero then told the protesters to gather in the intersection of 100 South and State St. Eventually, they hooked arms and formed a circle around the intersection, blocking all traffic until 8:30 p.m., when Lucero told them to disband.

As he marched westward along 100 South, Malik Dayo said the protest is needed to “bring attention to what’s happening in this state.”

“It’s an awesome march,” Dayo said. “This is going to be history one day.”