The geek community in Utah is strong, but if you're reading this blog you don't need me to tell you that. Almost every week, we present something nerdy happening around these parts. And with a community that size, sometimes it's hard to get people coordinated to come do anything without major promotions behind it. Enter: Geek Hangout Utah, a new organization working to create weekly and monthly events around SLC that people can come to for free and take part in to get their geek on. Today we chat with founder Mitch O'Dell about starting up the group and the events they have planned throughout the year. (All pictures provided courtesy of GHU.)

Gavin: Hey Mitch! First off, tell us a little bit about yourself.

How did you get into geek culture as a kid? What were you into growing up?

Well, I think like most people my age it probably started with Saturday morning cartoons. I loved the '90s X-Men run. I would wake up every Saturday and head straight to the TV to see what was going to happen next. But my first fandom was Scooby-Doo. I have a collection of Scooby toys I've been adding to for as long as I can remember.

As you became an adult, how was it seeing the geek culture grow to what it is today?

It's awesome! As a kid, I never would have imagined seeing all my favorite characters come to life. The first X-Men movie came out around my birthday and I begged my parents to take me. To see what geek fandom has become from that point is amazing! From the movies to the cons, it's amazing to see what it has become. Then to share it with my kids is really something special. It's almost like a second childhood.

Prior to the organization, what groups and events did you normally go to in SLC?

Prior to Salt Lake Comic Con, I really wasn't involved with anything. I started Geek Hangout Utah after the first Fan X so I could get more involved with people who had similar interests.

How did the idea for Geek Hangout Utah come about after Fan X?

I was super-excited and talking to strangers on Facebook in the Comic Con group. By the end of the Con, I had made a few friends, but wanted to meet more people. I realized that, outside of the cons at that point, there wasn't much going on to make that happen. It was at that point I decided to start the group.

What was it like for you setting stuff up and getting a staff of people on board?

A lot of trial and error. I made the group on Facebook and it blew up overnight. I then asked for volunteers to help me get things going.

What was it like setting up some of your first events? What were they?

In the early days, they were pretty small. Our first event was actually just a small meet up at Piper Down. After that, we did a lot of house parties and game nights. We played a lot of Cards Against Humanity and sang karaoke.

How do you usually figure out what events you want to hold and what ones work best?

I go to the group a lot to see what people are interested in. I want everyone to feel included regardless of what their fandom is. My admins help a ton with planning and coming up with ideas as well. After that, we set the events up and see how many people show.

What's the reaction been like so far, both from the places you hold them and from attendees?

Mostly positive. We got heavily involved with Watchtower Cafe when they opened, and we have an awesome relationship with them. Tui and Cori are amazing! We've also worked with Nerd Store and Frankie and Johnnies' a lot. Most of the attendees feel comfortable right off, which is great! 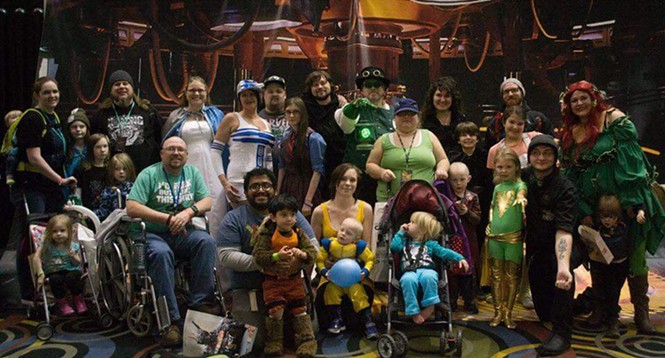 You've held gaming events, both and board, as well as LAN parties. What other events would you like to hold in the future?

We are making a big push some more charity events. We've helped with the MS Cosplay Karaoke the last two years, and that's been really special.

What events have you got coming up over the next month that people can attend?

We have Geek Coffee every Thursday at Watchtower Cafe. Those are themed each week so we can appeal to all types of geeks. We also have another LAN party coming up on July 16, and are working with the T.N.T. Show on July 17 with a Game Show they are doing. There is also a zombie hike on July 9, and we hold Card Trading events at Watchtower every other Sunday.

What can we expect from you and Geek Hangout Utah over the rest of 2016?

Hopefully some more big events. We are adding in regular bar nights among other events. We have two charity events in the works that should be going on in the next few months as well.