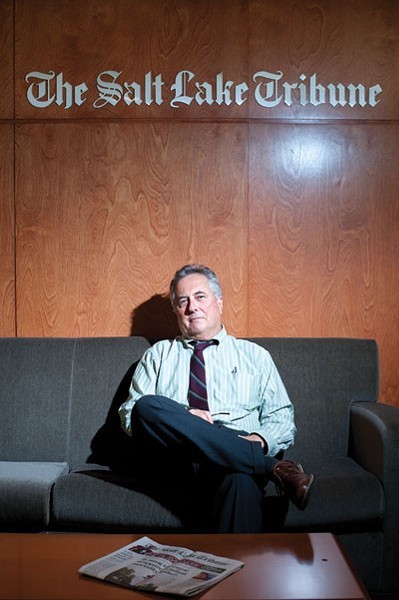 Two months after purchasing and becoming publisher of The Salt Lake Tribune, Paul Huntsman announced on Friday that Editor Terry Orme, a 39-year veteran of the newspaper, was no longer employed there.

In May, as Huntsman’s purchase of the 145-year-old newspaper was solidified, the businessman and son of industrialist and chemical magnate, Jon Huntsman Sr., said he would retain Orme as editor.

At the time, Orme told the Tribune he was “flattered they have trust in me.”

Orme, who was named editor and publisher in 2013 after 19 Tribune employees were laid off, is widely credited with shepherding the paper through its rockiest period. Shortly after taking the reins with nearly 20 percent fewer employees, Orme learned that the Deseret News and the Tribune’s former owner, Digital First Media, had renegotiated an agreement that detailed how certain parts of their businesses could commingle.

A large part of this agreement, known as a Joint Operating Agreement (JOA), involved sharing advertising sales departments and splitting the revenues. As the most widely distributed paper, the Tribune had long commanded the majority of this revenue, 58 percent. During the Fall of 2013, Orme discovered that the Tribune’s owner had sold for an undisclosed amount the majority of future print profits (70 percent) to the Deseret News.

The sale of the newspaper to a wealthy local family was heralded as a solid step toward saving the Tribune.
In an email to his staff on Friday morning, Orme apologized for not being able to say goodbye, and he said he’d leave it to Paul Huntsman to introduce the new editor.

“I have walked through a door marked The Salt Lake Tribune most days for most of the last four decades,” Orme wrote. “Today was the last time.”

In a news release, Huntsman lauded Orme’s tenure at the Tribune, while simultaneously announcing that former Tribune employee, Jennifer Napier-Pearce, who produced the paper’s online radio show, Trib Talk, would be taking over as editor.

In the news release, Huntsman does not say whether Orme was fired or if he left on his own terms. He does say that he would like the newspaper move into a more digitally-minded track. “While I seek a more digitally-focused Tribune with an editor who understands and assumes responsibility for that crucial lifeline to The Tribune’s future,” Huntsman wrote, “there always will be a significant journalistic role for Terry at The Tribune should he want it.”

Orme did not immediately return a call seeking comment.

Napier-Pearce, the news release says, has enjoyed a 20-year career in journalism. She has been a reporter and news director at KUER 90.1 FM and KCPW 88.3 FM. In addition to Trib Talk, Napier-Pearce also created a weekly news roundtable that airs on KCPW.

“I’m honored and humbled by this opportunity, and thrilled to be rejoining Utah’s finest reporters in the important work that is journalism,” Napier-Pearce, who is married to Utah Supreme Court Justice John A. Pearce, said in the news release. “This is a pivotal time for media generally and I’ll do everything I can to ensure The Tribune remains Utah’s journalistic leader, giving voice to the voiceless, holding power accountable and delivering great storytelling for years to come.”

While the past two months have been looking up for the Tribune, Orme’s sudden departure, laced with scant information, casts a shadow over the direction of the paper. During his tenure as editor and publisher, Orme said on more than one occasion that he would rather quit than chop another employee from his newsroom.

Joan O’Brien, a former Tribune employee, who in 2013 formed the Utah Newspaper Project to investigate the circumstances behind the profit-sharing deal that many believed would kill the Tribune, said she is concerned that Orme’s departure could spell layoffs.

At the same time, O’Brien said her group, which dropped a federal lawsuit it had filed against the Tribune and the Deseret News over the profit split when Huntsman managed to renegotiate the deal, says it’s not entirely surprising that Huntsman would make changes to upper management.

“When we were doing our fight all of those years, I think what we felt like we were fighting for was a staff, a collection of individuals, who were led by Terry,” O’Brien told City Weekly. “I’m saddened by his departure under any terms other than his own terms. He was absolutely a heroic figure.”

Tribune Deputy Editor Tim Fitzpatrick will act as interim editor until Napier-Pearce takes over on Sept. 1.
In his statement, Huntsman had nothing but good to say about Orme.

“Throughout his career, Terry stepped up and performed ably and admirably,” Huntsman wrote. “Most recently, he led The Tribune through grueling times of bleak finances and staff layoffs. He is a highly competent professional of impeccable integrity, decency and commitment to independent news coverage in Utah—qualities synonymous with The Salt Lake Tribune.”