One might expect there would have been a barrage of middle-fingers and a choir of “fuck you’s” aimed at Temple Square during Saturday’s fifth annual mass resignation from the Church of Jesus Christ of Latter Day Saints in Salt Lake City’s City Creek Park.


There was none of that.


Instead, the scene was one of love and camaraderie as nearly 100 individuals took a leap of faith away from the church and into the post-Mormon community.


“For me, it’s fulfilling just to be there,” leader of the Utah Valley Post-Mormons support group Steve Holbrook said. “I’m not trying to pull people out of the church. I don’t believe that would be appropriate. People should figure stuff out on their own and of their own volition. But having support for those difficult moments in life is hugely important.”


Holbrook left the church 25 years ago and has been part of the varying mass resignations in Utah since their inception. As a leading figure in the post-Mormon support community, he believes events like today’s provide a strength-in-numbers-type environment that is just what individuals who have decided to leave the church need.


“There is an instant camaraderie between people who have gone through leaving the church,” he said. “We all instantly recognize how tough it is and having others who get that is very fulfilling.”


Speakers “bore their testimony,” so to speak, about their exodus from the church.


Weber State University student Patrick Ramsay read a poetic declaration he penned to the crowd, which marked his very own church resignation. Ramsay’s speech began with a pounding repetition—anaphora for those familiar with poet-speak—of the phrase, “I should have done this.”


“I should have done this a long time ago,” Ramsay said of his resignation in the opening moments of his speech. He went on to share his battle with depression, the loss of relationships with friends, family and neighbors after coming out as gay, and the recent surge in suicides within the LGBTQ youth community. Ramsay shifted toward the end of his speech and made use of another repeated phrase: “I’m doing this.”


“I’m doing this because solutions require problems and the way I love is not a problem,” he proclaimed. 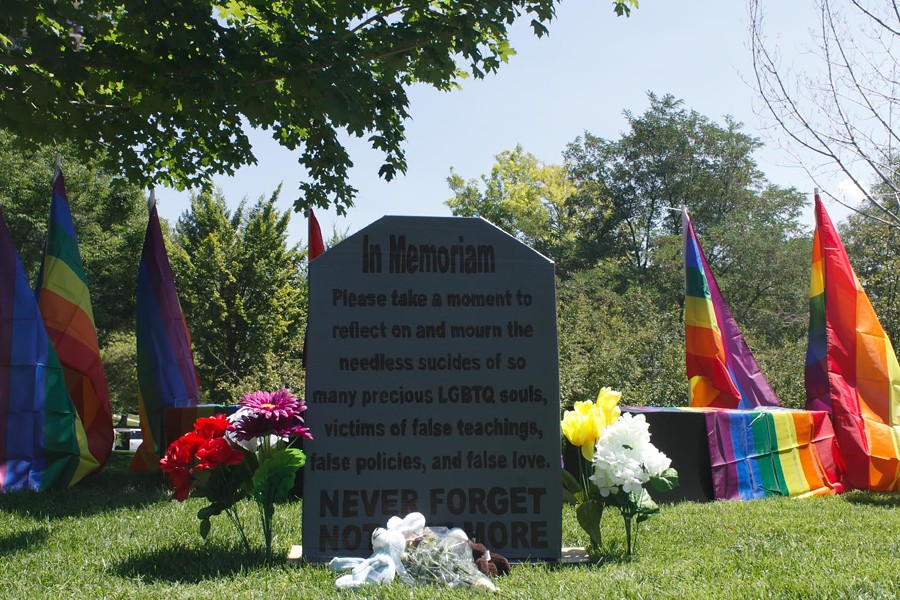 Katy Kelly, founder of Ordain Women and quasi-celebrity in the post-Mormon and activist Mormon communities, spoke about her feelings of respect toward those resigning at the event. She also pointed to passive involvement in the LDS church as a plague for the movements inside and outside of the church, which work to promote acceptance, love and equality for marginalized groups like the LGBTQ community and women.


“The only thing that is not a moral choice is to sit silently in the pews,” she said.


At the end of her speech, Kelly touched on the doctrinal-based critique many ex-Mormons face upon making the choice to leave the church for the sake of their own happiness.


She said many in the church believe those leaving the faith are missing out on “true happiness” by creating their own. To that notion of feigning happiness, she said, “That’s not for them to say.”


As turmoil surrounding LDS church history, doctrine and contemporary policies—such as November’s leak of the policy regarding children of homosexual parents—continues to grow, so, too, will events like Saturday’s mass resignation. Having support during the process of the leaving the church and after, Holbrook said, makes all the difference.


“It’s an identity thing. And the more you have invested your identity in the church the harder it is finding yourself outside of it. Because then you are saying, ‘I don’t know who I am,’” he said. “In those shifts it is good to have people around that understand you—that you are learning with.”