Roller derby season may be wrapping up for most of the leagues over the next two months, but for recreational leagues, they've still got the winter to look forward to. Those who love derby, and either want to stay in shape and have fun during the or don't care to be competitive and just want to skate in an open , there are options around the Wasatch Front for everyone. One of the biggest rec leagues in the state is The Beehive Skate Revolution, made up of current and former players from multiple teams and cities; the group gets together once a week to skate, and has friendly matches every couple of months. Today we chat with several members of the rec group about its foundation and how people can join in. (All pictures provided courtesy of BSR.) 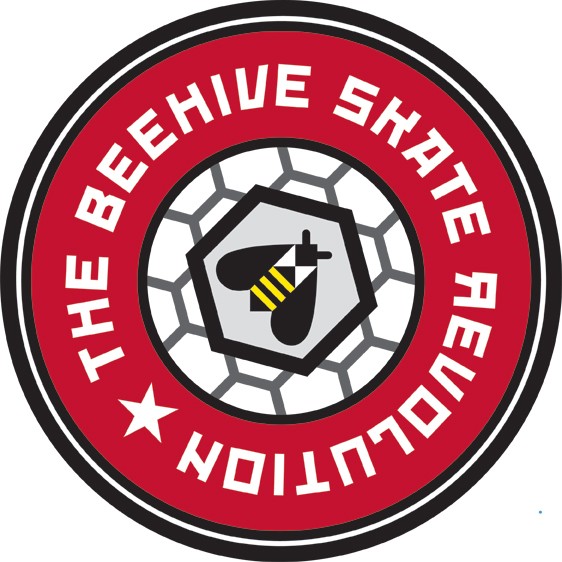 Gavin: Hey ladies! First off, tell us a little about yourselves.

: We are a recreational roller derby league in Salt Lake City, and we believe "Roller Derby is for EVERY body.” We really do mean that—we have skaters from age 18 up to their 50’s, including students, moms, nurses, psychologists, artists and even a funeral director. It doesn’t matter what your skin color, weight, religion, or sexual preference is—we want you to skate with us! The Revolution is a nonjudgmental, friendly environment for skaters that love this sport, whether they’ve never skated before, are returning from an injury, or have retired from competitive skating. We have a fluctuating membership, since we cater to people who can’t commit to the time it takes for competitive derby practices. We have a core group of about 50 women, and the league is run by active skaters. We have an elected board of trustees that rotates through different members, but right now it consists of Scissorella, BruisenBerg, Lucky and myself, Jammy Dodger. 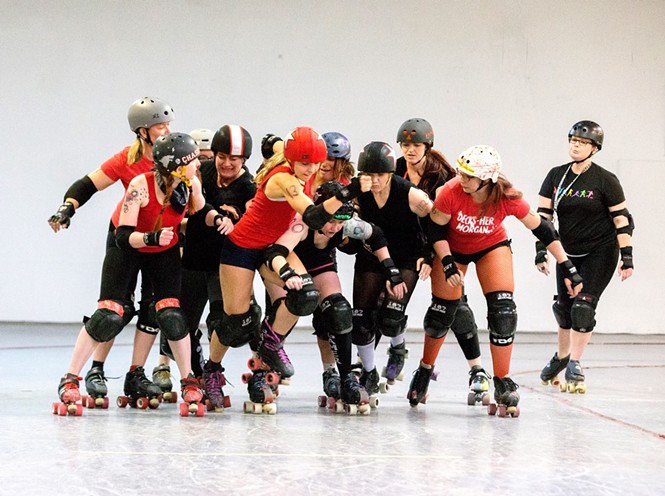 How did each of you get involved with the roller derby resurgence in Utah?

Scissorella: Five years ago, I was rehabbing an injury by skating around Liberty Park. I saw a group of women skating together on quad skates and they looked like they were having so much fun, and I immediately knew that I wanted to join. Later that week I was training a new girl at work, and it happened to come up that I set my mind to joining a roller derby team. She said, “Perfect, I skate with the Rockettes Recreational Roller Derby, and you can join next week!”

BruisenBerg: I had always played competitive sports in high school and then club/rec leagues in college. After I had settled in SLC, I was looking for a club or sport to get involved in but wanted an all-female team—coed is fun, but I missed the camaraderie of an all female team. I went to a Junction City bout and saw the women as athletic, strong and feminine. I wanted to be a part of that!

: I am not now, nor have I ever been, athletic in the slightest. But I did grow up roller skating, and derby sounded like a lot of fun. When my kids were little I needed some way to blow off steam, and this was just the ticket. Mama doesn’t need to scream now, because mama knocks people down.

Lucky: I initially got involved as a spectator—I had a friend that played for JCRD. The first time I experienced roller derby, I was hooked! I knew I wanted to play, but I hesitated because I’m a massage therapist and an injury would threaten my livelihood.

What each of you skated with prior to this current one?

Jammy: Most of us started out with Red Rockettes, the precursor to BSR, but a lot of our more advanced skaters also play with Ladies Of The Lake. We are affiliated with Unified Roller Sports of Utah, which means the Wasatch leagues are our sisters and brothers, and some of our players have gone on to skate with them. 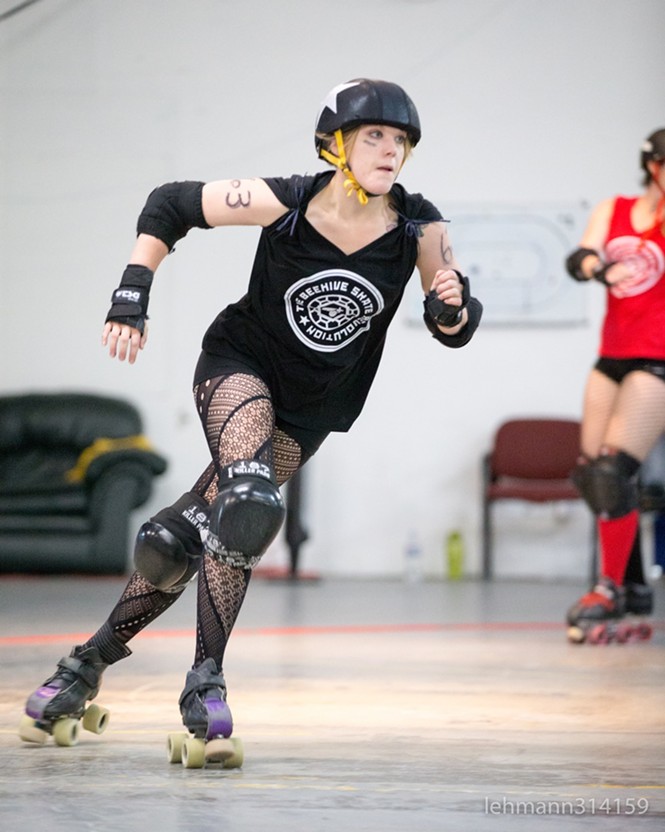 How did each of you meet up and become friends?

Jammy Dodger: Through derby, of course! That’s been an interesting thing, to meet people you have associated with in your regular life and become real friends. Tattooed lesbians and Relief Society presidents hanging out together—no joke!

Scissorella: I wore the rest of them down with my relentless smiling and easygoing demeanor. I made them be my friends.

At what point had each of you decided you were kinda done doing the competitive league thing?

Scissorella: I have always been into competitive sports, but that scene was not for me when it comes to roller derby. Don't get me wrong, I love to win, but it’s more about the spirit of the league. I have an amazing group of 50 women that I love to hang out with and talk with every week. Plus, we have a blast skating together without the pressure of being the best.

BruisenBerg: I am just now getting interested in playing more competitively—BSR has given me the skills and confidence to think that way.

Jammy: I still have one foot in that world, as I travel with Ladies Of The Lake often. Skating with BSR is not an either/or thing. 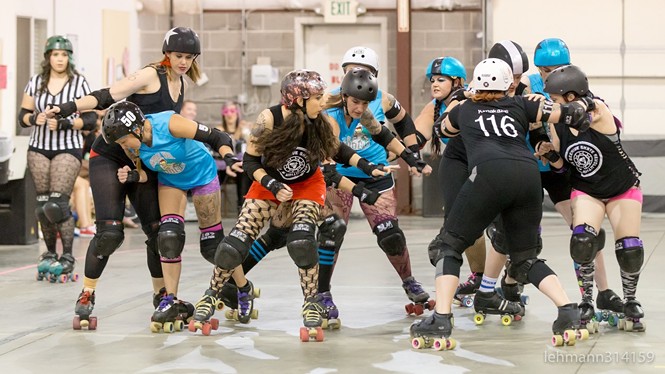 How did the idea to start a new recreational group come about?

Lucky: We’re actually Version 2.0 of the rec derby in Utah. We had to rebrand due to, ahem, legal issues, but we started out as the Red Rockettes. The founders of the Rockettes had skated with Salt City Derby Girls, and they wanted a place to play non-competitive derby. The league also allows women of all different shapes and sizes, with hectic work and family lives, to be able to play. And honestly, not everyone wants to play competitively.

What are the requirements for people to join the league?

Jammy: A pulse? No, just kidding.

BrusienBerg: A positive attitude, an open mind, a tolerance for others, and the money to pay for dues and equipment.

Scissorella: You have to be over 18, and you have to be willing to laugh at yourself when you fall down, because when you are learning how to play derby, you will fall down!

Jammy Dodger: It’s true—every picture I have of Rella is her falling down. We all do, of course, but the point is, we get back up again. 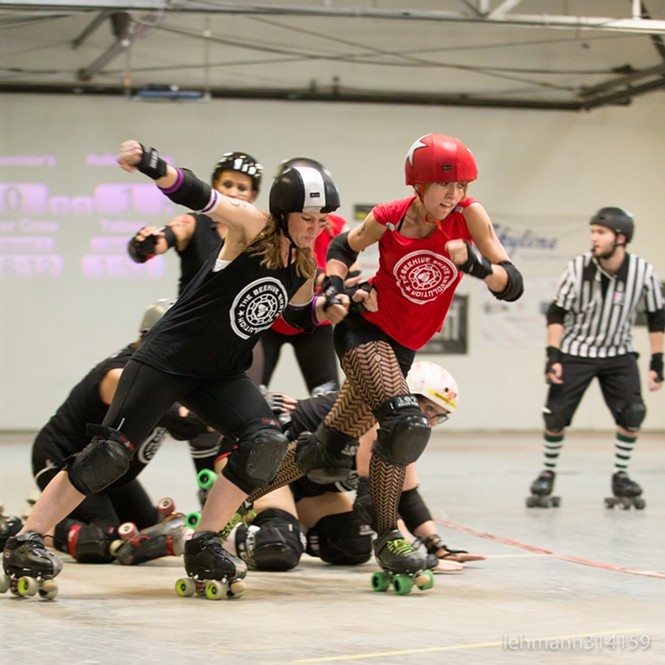 For those who may not be familiar, what kind of activities do you do throughout the year, both on and off the rink?

Lucky: We practice once a week, on Thursday nights from 7-10 p.m., and we have a public bout every three months. That continues all year—we don’t have an “off” season! A lot of us hang out after practice and catch up, but when we have the time we have pool parties at Grateful dRed’s house, get together for drinks or a hike, or volunteer at other leagues' events. The St. Patrick’s Day Parade and the Pride Parade and Festival draw lots of participation from our skaters, too. We also try to partner with community organizations, and we’re excited to be working with Kandie the Therapy Pittie this fall.

How has it been working with other leagues and groups around the state to hold games?

BrusienBerg: The other groups are great to work with, but we often find that having so many leagues taxes the officiating staff we all share. We need refs and non-skating officials—come join us!

Scissorella: Happy Valley Derby Darlins are the only other league in the state with a rec team, the Bridal Veil Dolls. They are always so much fun to skate against, and it’s like a reunion when we see them! Several of our girls that used to skate with us and live in Utah County now skate with them.

: I have been so impressed with the unity and camaraderie the derby community in Utah continues to exhibit. It’s very much a family, complete with internal squabbles, but when the chips are down you know who you can count on. 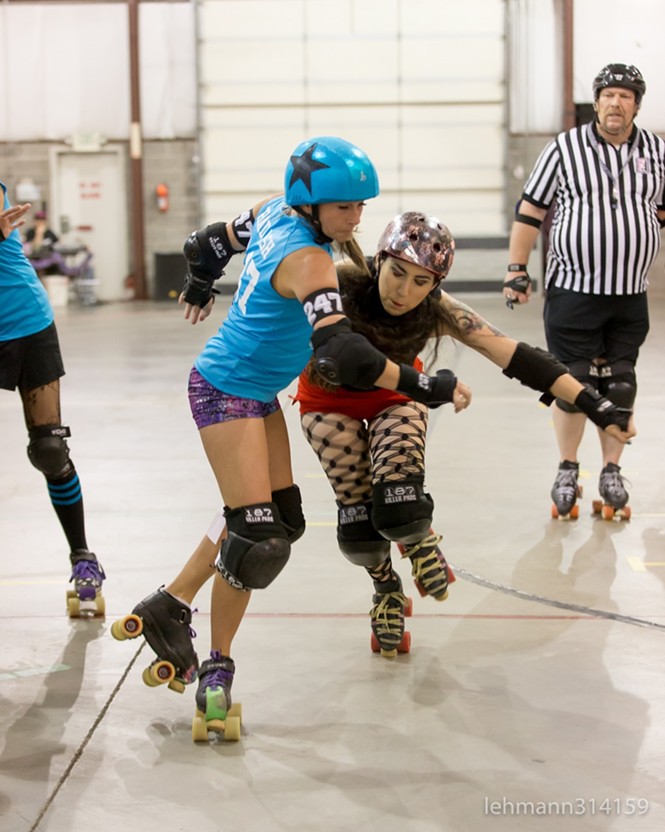 You recently returned from RollerCon this year. What was that experience like for you?

BruisenBerg: I thought it was a great experience! I met amazing skaters from across the globe, including one from Norway who shared my derby name. Where else can you get one-on-one pointers from the players you idolize? It’s like Payton Manning or Michael Jordan giving you feedback on how you are playing. It was amazing to see how this sport has grown over the last ten years—it’s still in its infancy and the game and strategy are always changing.

Jammy Dodger: This was my second year going, and it’s always a balancing act between partying and participation. It was a great bonding experience for both our league’s players and all the Utah teams—it’s fun to see familiar faces in Vegas, and many of us got to bout and scrimmage together while there.

Tell us about some of the events you have coming up.

Lucky: Our end-of-summer session bout is coming up on Sept. 8, and the next 12-week training session starts Sept. 18. We also hope to be skating against the Dolls again in the Beehive Brawl in October. 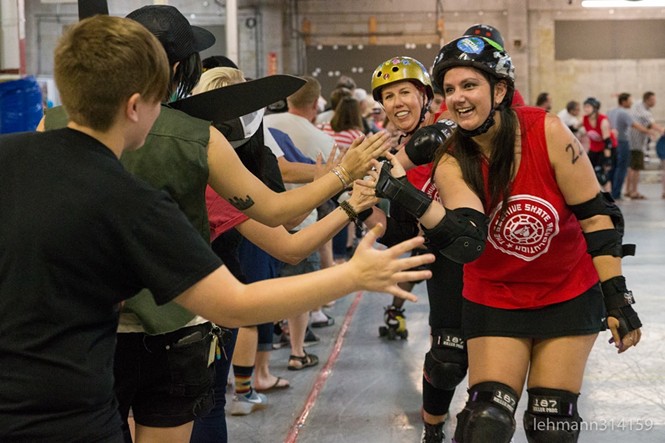 What can we expect from each of you and Beehive Skate Revolution over the rest of 2016?

Jammy Dodger: I would really like to not see any more injuries OR pregnancies in our players, okay? (We’ve had two babies so far this year, with two more on the way.) We are starting up a new recruitment campaign, with the theme “So what’s stopping you?” I want to share the glory of roller derby with as many new faces as possible!