'An Inconvenient Sequel' kicks off the festival. 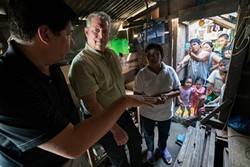 An Inconvenient Sequel: Truth to Power (Documentary Premieres) **1/2
It might be hard for detractors of the original An Inconvenient Truth to imagine feeling nostalgic for all the PowerPoint presentation material, and yet here we are.  Where Davis Guggenheim's 2006 Oscar-winner backgrounded the biographical material about Al Gore himself in order to focus on the former Vice President's urgent message about climate change, co-directors Bonni Cohen and Jon Shenk (last year's Sundance doc Audrie & Daisy) make this follow-up almost entirely about Gore himself and his ongoing crusade, leading up to his involvement in the 2015 U.N. Paris summit. There are moments of enjoyably self-deprecating humor sprinkled throughout; when a colleague notes regarding getting Florida state officials on board with climate-related efforts that "Florida is a challenge," Gore wryly replies, "I can confirm that." But as admirable as Gore's efforts are—and indeed, he may have brokered a key moment that brings India on board with the agreement—the hero-worship here grows a bit tiring. I'd much rather watch him explain to an audience both the threats and the hopes of the cause that has come to define his legacy, instead of watching him stare out at a retreating glacier with his jaw firmly set. (Scott Renshaw)

Whose Streets? (U.S. Documentary) ***
Director Sabaah Folayan walks an effective line between the big picture and individual stories in this you-are-there account of Mike Brown Jr.'s death in a police shooting in Ferguson, Mo., and the ensuing community protests. The protests themselves unfold with the urgency of footage captured on phone cameras, interspersed with on-screen Twitter messages that clarify the role of social media as de facto journalism and rallying cry, while material from news coverage shows how much the media brought an infuriating "both sides" dynamic to focusing on looting just as much as military-style police reaction. And Folayan paints compelling character studies of some of the individual community activists like Brittany Ferrell, bringing articulate passion to the story beyond the marches and slogans. Most significantly, though, it feels like a holistic portrait of a city that became a national buzzword, reminding us that there are people who still had to make this place their home after the TV cameras moved on.  If one overarching, heartbreaking story emerges, it's the sense of people wondering if the "normal" in their own lives will ever be the "normal" enjoyed by Americans who don't happen to be poor and black. (Scott Renshaw)

The Workers Cup (World Documentary) zero stars
Stephen Spielbergo, auteur of the Springfield Film Festival highlight A Burns for All Seasons, would gaze in awe at the shamelessness of The Workers Cup. I looked on with slack-jawed horror, unsurprised to see the special thanks in the closing credits to the Gulf Contracting Co., its general manager and the Qatar Supreme Committee for Delivery and Legacy. The Workers Cup is about the GCC soccer team, which consists of indentured servants imported from Africa and the Indian subcontinent to build soccer stadiums and related infrastructure so Qatar can host the 2022 World Cup. More than 1,000 workers have reportedly died in the crash building project for a nation with 300,000 citizens and a meager soccer tradition. That any fatalities have occurred is mentioned once, with about 15 minutes left. Before then, managers have several times said everything is supervised by the U.N., signs promoting worker safety have found their way into the frame, and the slogan “make safety personal” was even shown on the team shirts. Meanwhile, the tournament is covered with full sports-doc conventions, and the corporate boss PBUH is shown mingling with his minions. Not every movie has to be an exposé. And yes, the workers are human beings, not mere victims. But this is just a shill job. (Victor Morton)

Pop Aye (World Dramatic) **
In an indication of how truly international Sundance has become, other countries have now adapted the “Sundance movie” template to the local “cuisine.” Pop Aye is basically a Thai Little Miss Sunshine only instead of a 6-year-old girl, it's a middle-aged man, and instead of a family van, the cross-country trip involves … an elephant named Popeye. Our hero is disrespected at his job, his wife has a dildo – until he discovers a cure to this mid-life crisis. Instead of a Corvette or a hot chick, it's the elephant he had raised as a boy, which he suddenly comes across in Bangkok. Along the way to return the beast to his uncle, he meets a hooker with a heart of gold, some bumbling cops, and a wise bum; the films gives us TWO third-act medical emergencies; and at the end, there's a surprise twist. Even if you don't mind these cliches, Pop Aye would still come across rather wan and low-energy. Little Miss Sunshine was at least trying to be funny and there was tension within that family, while Pop Aye just lumbers through the motions, enacting a lot of premises without taking them anywhere. (Victor Morton)