Jill Stein on clean air, Bernie Sanders and the importance of third-party candidates. 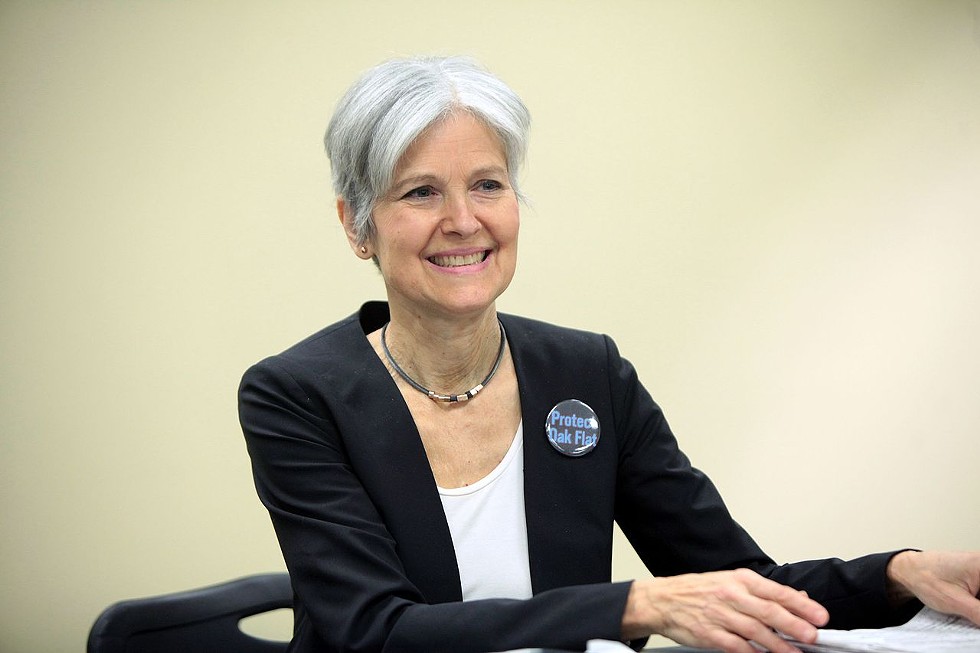 Almost a rite of passage for third-party candidates, Green Party presidential candidate Jill Stein was excoriated for running in the 2016 election. After November’s tally, liberals argued that she effectively handed the White House to Donald Trump.


So you can heap Stein’s name onto history’s list of third-party spoilers that includes notables like Ralph Nader and H. Ross Perot.


But Stein doesn’t see it that way, and she says the numbers don’t bear out either. For starters, she says, it’s false to assume that all of her votes in Wisconsin, Michigan and Pennsylvania would have gone to Democratic candidate Hillary Clinton. Based on polling, she believes many would have stayed home, and others would have picked Trump.


Despite the criticism, Stein, a physician and activist, continues to champion third parties and the Green Party in particular. She spoke with City Weekly via telephone leading up to her Saturday visit to Salt Lake City for the Utah Green Party convention, at which she is scheduled to speak.

CW: Third parties get blamed—especially by members of the two major political parties. This is most apparent after a presidential race because sometimes the margins of victory are so thin. I want to give you the opportunity to defend third parties.

JS: Great! Let me first point out that third parties is where the abolition of slavery came from; the 40-hour week; women’s right to vote. Major social movements have really relied on third parties for advancement.


The second point is, that the big politicians—with all their money and lobbyists and political machines—often assume that they own our votes, that they have a right to our votes. But really, democracy says they have to earn our votes. Those who say a third-party candidate stole the votes from, say, a Democrat, they are making the assumption that Hillary Clinton owned our vote. She didn’t. In fact, the vast majority of American people thought that these were the two most disliked, untrusted candidates in modern history. They were clamoring for other voices and other choices. Over 75 percent of Americans were screaming to open up the debates so they could find out who else they could vote for. Of course, our debate system is setup to silence political opposition.


Why has it taken third parties to push for these social issues like the abolition of slavery, and 40-hour work weeks and a woman’s right to vote?

I think the answer to that really lies in the fact that most democracies are actually multi-partisan democracies. This two-party thing is not a way most democracies work. When you have only two parties, it’s very easy to buy them out and they become aligned with, essentially, the bankers and the war profiteers and the insurance companies and the pharmaceutical companies. The status quo is served very well if you only have two parties. It’s a stationary target, and it’s easy for them to be bought out.

Of the two major political parties, the Green Party aligns closest with the Democrats, why not join that party and try to move the platform on the issues that you find most important? Or are there issues that the two parties can’t reconcile?


That strategy sounds like a good strategy, but most Greens are people who have had enough going down that road over and over and over again. Bernie Sanders wasn’t the first progressive to be sabotaged by the party. The same thing with Dennis Kucinich, Al Sharpton, with Jesse Jackson decades ago. Back in the 1950s and '60s, there was a movement called the Realignment Movement, which attempted to do the same thing and it was founded on the Vietnam War because you couldn’t be a critic in good standing unless you embraced the war effort. The Democratic Party got bought out a long time ago. … Many people are just not going to be jerked around by that same strategy, which has really been used as a Trojan horse for the same big money forces to continue pushing us over the cliff and throwing the American people under the bus.

"Utah is a treasure trove of renewable energy waiting to happen. Instead of poisoning the air and the people and the water supply, if you convert to a clean renewable energy, you save so much money just in terms of the health costs alone, that the switch to renewable pays for itself. " tweet this
What are the short-term goals of the Green Party? Is it to change the conversation, to make sure things like the environment and social justice aren’t left out of political discourse? Or to get members elected to local offices? Or to get members elected to Congress?


Absolutely. Of course, all of these goals go together. Point to the very successful actions of a third party in the 1900s with the rise of the labor movement, when Eugene Debs ran for president several times. Never got much in the way of the presidential vote but he helped inspire a movement whereby local candidates ran for office and won. This was the Socialist Party, also the Progressive Party. A variety of independent, pro-working people, non-corporate political parties who had enormous influence, who won local office, who created whole public schools, departments of public health, labor laws, had enormous impact not just at the local level but at the state level. They really changed the agenda of both parties. In order for a social movement to get traction, you have to have a political voice. That’s just been true throughout history. So whether the success is willing local office—and we’ve had over 1,000 serve in local office—or whether the objective is to change the agenda, all of these are worthy and critical goals. The City of Richmond, Calif., had a Green Party mayor. This is a very poor, industrialized city in California with over 100,000 population with a very dangerous refinery. Under the leadership of the Green Party candidate, they created lots of small businesses; they required the wealthy to pay their fair share—including their enormous refinery polluter—forced them to clean up and make safer their factory; brought down the homicide rate enormously; they instituted community policing, totally revised how they did law enforcement to tremendous success.


I don’t know if you’ve been watching Utah very much. It’s a long-standing conservative state. Have you noticed anything that would be encouraging to a left-leaning politician in Utah or states like Utah?

I do know a bit about the issues in Utah that are really important, including air quality, including the opioid epidemic, including the struggle for public education. The assault on our [public lands] and Bears Ears-type national treasures. On all of these issues, these are basic issues for the public good. These are issues that repay the cost enormously. … Utah is a treasure trove of renewable energy waiting to happen. Instead of poisoning the air and the people and the water supply, if you convert to a clean renewable energy, you save so much money just in terms of the health costs alone, that the switch to renewable pays for itself. That’s true nationally and that’s true in every state. How do you put a price tag on our health and our lives and our water supplies. … There are generally lots of everyday people who have been left out. The Democrats don’t really stand up and fight for them. People need a champion. The Green Party is the emerging champion for the everyday people of Utah who deserve health care, who deserve quality public education and free public higher education. The people of Utah who benefit from the incredible tourist industry, who need to protect that public land and that water supply. The Green Party lifts up all of those causes and those voices in a way that people have long been clamoring for.