This month, while an ideological rift splitting President Donald Trump and a few Republican lawmakers has widened, there is no love lost for Utah’s senior ranking senator. Sens. Bob Corker, R-Tenn, and Jeff Flake, R-Ariz., have lashed out at Trump’s positions and tactics, and in turn, they’ve been the target of name-calling from Trump’s Twitter-mouth.


But if GOP infighting isn’t your thing, Sen. Orrin Hatch’s relationship with Trump appears to be progressing swimmingly.


The national monument was established during the last month of the Obama administration to the chagrin of the Utah delegation, as well as many state and local politicians. With a new administration at the helm, Trump tasked Interior Secretary Ryan Zinke to review a number of monuments. He recommended a large land-reduction for Bears Ears. 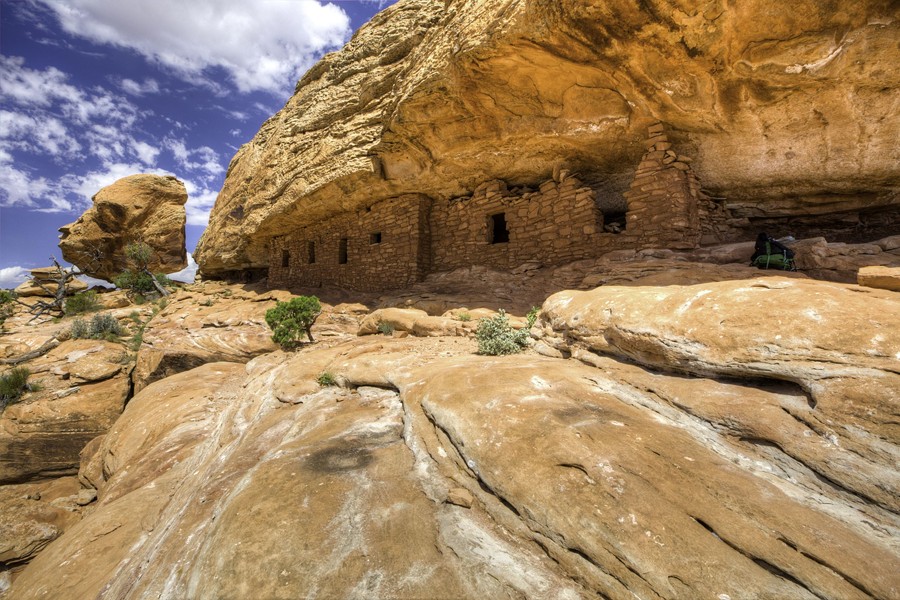 "Our recommendations have been, first, that any new boundaries protect the extraordinary antiquities within these areas. Second, that local Native Americans be given meaningful co-management of the lands in the Bears Ears region ..." –Gov. Gary Herbert tweet this

“I was incredibly grateful when the President called this morning to let us know that he is approving Secretary Zinke’s recommendation on Bears Ears,” Hatch said in a statement. “Protecting sacred antiquities is a matter of critical importance, and Secretary Zinke and the Trump administration rolled up their sleeves to dig in, talk to locals, talk to local tribes and find a better way to do it.”


Perhaps Hatch forgot to check in with tribal leaders, though, before he implied everything was copacetic, because many of the involved tribes have summarily opposed the idea of slicing up Utah’s newest national monument.


“It’s false. It’s completely false,” Natalie Landreth, attorney with Native American Rights Fund, says of Hatch’s statement. “The tribes are on record over and over and over again saying, ‘Don’t touch it.’”


The Inter-Tribal Coalition, which formed in 2015 to establish the monument, sent out a letter in August calling Zinke’s recommendation an “insult to Tribes.”


“He has shown complete disregard for Sovereign Tribes with ancestral connections to the region, as well as to the hundreds of thousands of people who have expressed support for Bears Ears National Monument,” the statement continued.


Supporters of the monument note that the attempted rescission will invariably end up in the courts.


“The tribes will be suing immediately, and we already have a complaint ready to go,” Landreth says.


Utah Gov. Gary Herbert, a critic of the monument, also sent out an email Friday saying Trump had called him that day as well.


“While we do not yet know the specifics of their final plan, I understand from our conversation that any final decision will honor our recommendations. Our recommendations have been, first, that any new boundaries protect the extraordinary antiquities within these areas. Second, that local Native Americans be given meaningful co-management of the lands in the Bears Ears region. And finally, that Congress be urged to pass appropriate protections for federal lands throughout Southern Utah.”


Not all local politicians side with the president. The ever-outspoken state Sen. Jim Dabakis, D-Salt Lake City, panned the decision, arguing that by shrinking the monument, the government was opening up avenues for resource extraction.


“The winners in the President’s decision are the fossil fuels industry, giant international coal companies, and the pollution industry,” he said in a statement. “The losers are Utah families, outdoor enthusiasts, hunters, campers, climbers and all who appreciate the unspeakable beauty of our State. This is an ugly violation of the stewardship responsibility we have to protect our sacred land.”


The San Juan County Commission, however, a local government body near the monument, expressed the opposite sentiment: “As a Commission, we are thrilled the years of meetings, countless hours of discussion and tirelessly dedicated advocacy has resulted in our voices being heard by President Trump and Secretary Zinke.We take heart in our shared belief that the people of San Juan will continue to take special care of these magnificent lands. This is our home, no one wants to see it protected and secure for future generations more than we do.”