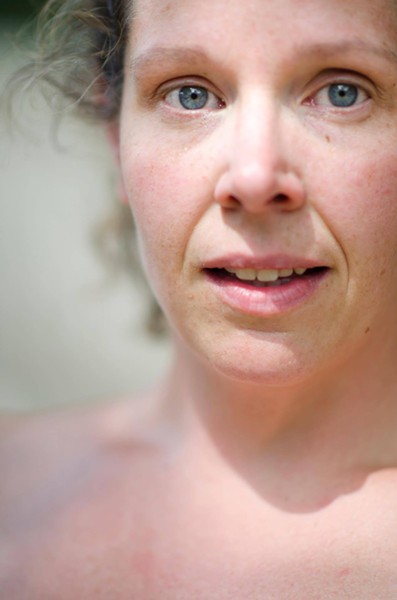 Dozens of short theater, dance, monologue and other performance pieces will make their debuts over the course of the Great Salt Lake Fringe Festival's 10-day run. And as with any festival, there's an inevitable FOMO component, as there's no way you can get a chance to watch everything. Here are a few highlights from the opening weekend performances; shows continue through Aug. 6.

Sackerson: Do You Want to See Me Naked? Don't be alarmed if your impression of a one-woman show touching on gender roles and body image comes from that one episode of Friends where Chandler is accosted by an angry monologist. Elizabeth Golden (pictured) performs Morag Shepherd's script with a mix of blistering humor and uncomfortable self-exposure, sharing the complexities of being a woman, a Mormon and a person of not-model-svelte size. Be ready for some audience participation—occasionally awkward, but perfectly incorporated—as Golden delivers a beautifully angry performance capturing the mixed messages sent to women about their bodies, whether from their church or from society at large.  (Remaining performances Aug. 4, 6 p.m.; Aug. 6, 7:30 p.m.)

Matheatre: Curie Me Away! Think of it as a feature-length Schoolhouse Rock, as Sadie Bowman and Ricky Coates tell the story of Marie and Pierre Curie through a collection of catchy musical numbers. Many of those songs are built on chemical puns—it's both applause- and groan-worthy when the couple is joined in "holy antimony"—and there's an awful lot of information packed into the 60-minute run time. But the creative stagecraft (including shadow-plays for multiple male supporting characters) and energetic performances provide a solid foundation for conveying the obstacles faced by Curie in the early 20th century as a woman—and eventually wife and mother—trying to be taken seriously as a scientist.  (Remaining performances Aug. 4, 9 p.m.; Aug. 5, 3 p.m.; Aug. 6, 4:30 p.m.)

The Jawbone's Daughter A splendidly surreal mash-up of Samuel Beckett and Tom Stoppard, Eric Paul Lyman's absurdist comedy opens with two men—Flince (Jon Liddiard) and Strothe (Chris Bentley)—trying to survive in a desolate landscape, until they find a potential refuge guarded by one-eyed Drummond (played by playwright Lyman). All three performances are terrific, though Liddiard has particular fun with a loquacious character whose florid vocabulary feels like an attempt to wrestle civilization out of chaos. Jake Ben Suazo's deft direction nails both the timing of the physical comedy and the twisty verbal gymnastics, pulling multiple levels of humor out of a world of arbitrary displays of authority and confused identity, a world that only makes sense when you realize how little the world makes sense. (Remaining performances Aug. 4, 7:30 p.m.; Aug. 5, 4:30 p.m.)