You could spin in circles trying to pin the right genre qualifier on Boytoy, but instead of that exercise in futility you can ride the band’s wave of slacker/stoner attitude. For their strutting single “NY Rip-Off,” they made a “non-music video” featuring black and white line drawings of life in New York; for their recent live session at Paste Studios, they told stories of Topanga Canyon dogs and the inspiration for Night Leaf, including “love, lust, loss, and life.”

For all its indescribability, Boytoy’s music creates a distinct aura. “Mary Anne” floats on a haze of ominous ennui, “Juarez” sounds piped in from a distant AM radio signal in the Texas desert, “I Get Distant” struts down the sidewalk of a long-gone, much grimier Lower East Side, and “Cold Love” adds a touch of languorous organ to the heady Boytoy mix.

It’s a tasty mix that sounds familiar yet forward-thinking, throwback yet contemporary—and live, there’s extra firepower in the expanded four-piece lineup, which lets Boytoy add rip and roar to their summer fun. Expect the band’s profile to grow exponentially, which makes this intimate Diabolical Records stop with support from LA’s The Entire Universe and locals The Cold Year and Radio Blonde extra special.
While we’re talking about Diabolical Records, the little Edison St. record shop that started in a Kilby Court shipping container celebrates five years of slangin’ deep cuts and hosting sweaty shows on Saturday, July 7. Headlining will be Denver’s Echo Beds along with an all-star edition of Bandemonium, which features a curated band of local musicians hand-chosen by Diabolical co-owners Adam Tye and Alana Moscan. “These past 5 years have been an insane ride and we're so glad you've come along on it with us,” the husband-and-wife team said in a Facebook post about the July 7 show. “Now come celebrate and listen to awesome bands and buy lots and lots and lots of things so we can be around for five more years.”

Other quick hits for this week: Provo gets popping with its annual Freedom Festival, which runs July 2 -  4, and features everything from a Balloon Fest and Colonial Fest to a fine art show and grand parade. The big finale comes during Wednesday night’s Stadium of Fire, when Grammy-nominated pop-rock bigwigs OneRepublic headline BYU’s LaVell Edwards Stadium alongside with the largest stadium fireworks show in the nation. 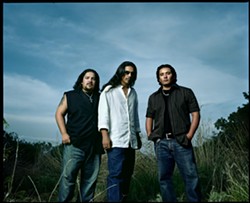 After the holiday, you can celebrate any way you please: avant-garde indie rock at Kilby Court on Thursday, July 5 with Bent Knee, Gatherers and Westing; a stacked bill of modern dubstep at The Urban Lounge or the piano-pounding acrobatics of Philly’s Low Cut Connie opening for SoCal punk icons Social Distortion at The Depot on Friday, July 6; or the 18th Annual Salt Lake City Jazz Festival bringing fresh grooves to downtown with headliners Santa Fe & The Fat City Horns and Ellis Hall.