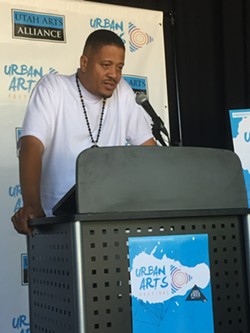 The 2018 Urban Arts Festival announced hip-hop stalwart Chali 2na as headliner for the eighth annual event, allowing him to showcase both his music and his visual arts.

In a Friday morning press conference, festival coordinator Derek Dyer discussed the wide variety of art and entertainment that will be on display at the free event, scheduled for Sept. 15-16 at the Gallivan Center. More than 40 local and regional music acts are set to be featured throughout the weekend, along with more than 150 visual artists, breakdancing performances/battles, food trucks and the Hard N Paint 3-on-3 basketball and slam dunk competitions.

New additions for 2018 include an urban fashion show, with designers, stylists and makeup artists working with models, and "digital graffiti" augmented-reality public art that can be seen throughout the festival grounds  at 12 locations via the festival app.

But the headline event will be the performance by Chali 2na—of the celebrated group Jurassic 5—performing with his band House of Vibe. 2na says that he's looking forward to the opportunity not just to perform his music, but to participate in a live demonstration of his visual art skills, which he has been working on for years. "I have a mission now to try to expose the things I can do outside of music," he says. "I'm happy to finally see this stuff come to fruition."

In addition to the public painting event, 2na will lead an art talk for a limited audience, for those who purchase festival VIP packages or individual tickets at the City Weekly Store (scheduled to be available later today).