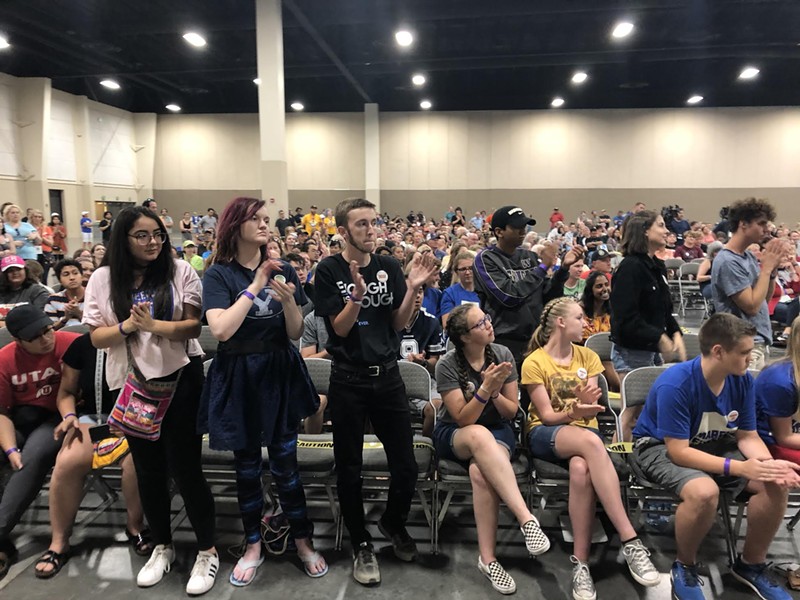 “I have a problem with youth,” an elderly man told a panel of 10 teenagers gathered on Saturday night to talk about gun violence at the Mountain America Expo Center. “They don’t know how the world works.”


In response, Saida Dahir, a 17-year-old student at Salt Lake City’s Academy for Math, Engineering and Science, ticked off a list of school shootings over the past 14 years, explaining that she had been afraid of being shot in class during the majority of her school life. “This issue has forced youth to grow up quicker than we deserve,” she said.


Dahir and several Utah-area high school students and recent graduates were joined by members of the nationwide March for Our Lives: Road to Change tour, a group of rising activists–including survivors of the Feb. 14 mass shooting at Marjory Stoneman Douglas High School–who are visiting “places where the NRA has strongholds” to educate young people and register and motivate them to vote.


David Hogg, a prominent March for Our Lives member who survived the Parkland, Fla., shooting and was not part of the panel, tweeted before the event that they’d be speaking in U.S. Rep. Mia Love’s district, where more than 127,000 young people between the ages of 18 and 29 reside. “The voter turnout among registered voters in 2014 was 147,168 in UT-4. The vote differential was 7,511. Young people WILL determine the outcome of this district if they turn out to vote,” Hogg wrote.

“We are strong supporters of the Constitution. ... We’re not asking any law-abiding citizens to give up their guns.” —Parkland shooting survivor Ryan Deitsch click to tweet

The local gathering almost didn’t happen. Earlier in the week, The Salt Lake Tribune reported that Utah Gun Exchange members had been following the tour across the country in an military-style vehicle to express their disdain for gun restrictions. After that article came out, the South Jordan Megaplex theater pulled out as hosting venue, causing organizers to scramble before they secured the space at the expo center. 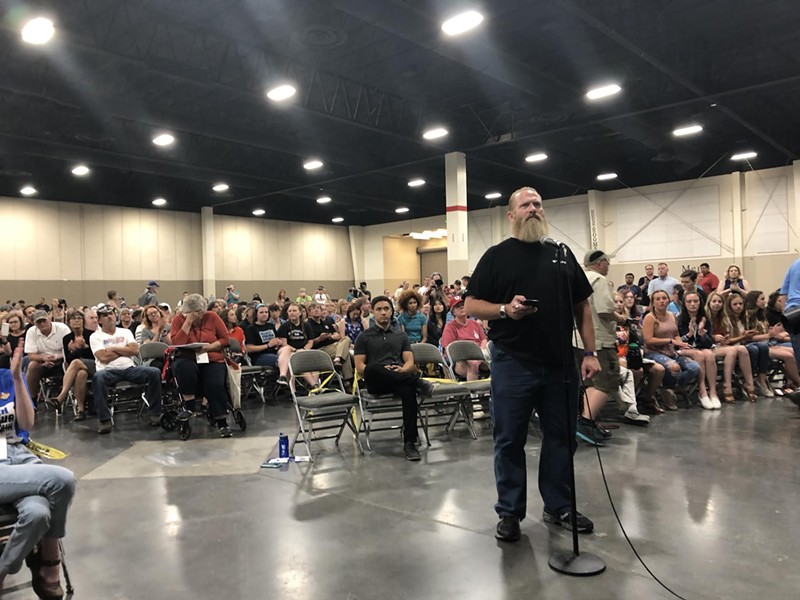 Before the Road to Change students arrived, City Weekly spoke with Sam Robinson, Utah Gun Exchange co-owner, who said he attended the town hall because he hopes to “begin to open up a dialogue; create some trust.”


Parkland shooting survivor Ryan Deitsch took time to address misconceptions surrounding the March for Our Lives movement. “We are strong supporters of the Constitution,” he said, later adding that, “We’re not asking any law-abiding citizens to give up their guns.”


March for Our Lives calls for universal background checks, a ban on high-capacity magazines and funds for the Centers for Disease Control to research gun violence. In response to a question from Robinson, Deitsch told the 1,200 in attendance that the group is also working with different organizations to decrease gun violence, indicating that not all their efforts revolve around gun-control measures.


Alex King, recent graduate from a Chicago high school who’s on the tour, encouraged younger members of the crowd to think of their fear as motivation to join their cause. “I was scared I’d be a statistic," he said. "I used that fear and I stood up.”


Collin Thorup, who walked out of his West Valley City high school in May to show his support for the Second Amendment, mentioned he and his friends are shut down in class by peers and teachers when they talk about their pro-gun views, and said he was harassed when he counter-protested a Salt Lake City March for Our Lives Rally in May.


Deitsch questioned Thorup’s protesting a rally titled “March for Our Lives” by demonstrating alongside people carrying firearms, but said so long as Thorup is clear and positive with his message, he shouldn’t be harassed for his beliefs.


Thorup ended his time at the microphone by thanking everyone in attendance. “There’s no hate from our group. Just like I know there’s not hate from your group. We should come together,” he said as applause drowned out the rest of his message.


Afterward, Brian Suiter, a recent Payson High School grad, said he thought the town hall was helpful. He’d come to show that responsible gun owners aren’t out to hurt people and that they own weapons to protect those important to them. “My ability to carry a firearm is an act of love,” he said.


Herriman High student Kimberly Knowlton, said she was glad to see a respectful exchange of ideas. Recalling a conversation she recently had with her father, who has conservative political views, Knowlton said talking to people who think differently is the key to enacting change. “It’s a lot easier to find common ground than you think,” she said.