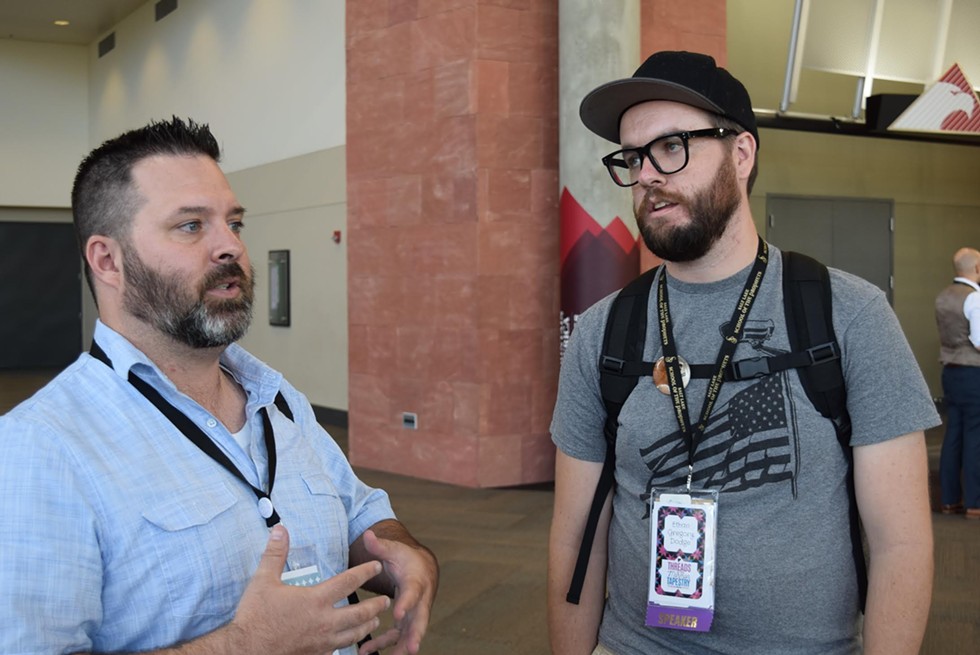 Ryan McKnight, founder of MormonLeaks, spoke to a small crowd Friday morning about the opacity of The Church of Jesus Christ of Latter-day Saints, or as he dubbed it, “a business that dabbles in religion.”


“There is no legal obligation for the church to be transparent,” McKnight said. “Religion is the last sacred cow in this country.”


McKnight and his partner, Ethan Dodge, who handles cyber security for the MormonLeaks site and co-founded the Truth and Transparency Foundation alongside McKnight, gave the presentation—titled “The History of Transparency and Censorship Within the LDS church”—in Sandy at the 2018 Summer Sunstone Symposium.


The annual gathering is billed as a mix of “Latter-day Saints, scholars and others interested in the diversity and richness of Mormon thought and experience who enjoy pondering the past, present, and future of the unfolding Restoration,” according to the five-day program.


Dodge spent his half of the hour-long talk putting the institution’s censorship and opaqueness into historical perspective before McKnight explained how that history created a need for MormonLeaks. Dodge talked at length about the destruction of the Nauvoo Expositor, an Illinois newspaper that published a single issue in 1844 that discussed Joseph Smith’s polygamy. “He was really upset,” Dodge said, recounting how Smith ordered the destruction of the paper, resulting in its printing press being dragged into the street and set on fire.


After citing the institution’s publishing of annual financial reports until 1959 and Leonard Arrington’s struggle for a more open and honest retelling of Mormon history, Dodge turned to the availability of information in the digital age. He credited the Gospel Topics Essays the church began publishing in 2013 and its Joseph Smith Papers project, but said they still had a ways to go before satisfying Dodge’s desire for further openness.


Much of McKnight’s presentation centered on MormonLeaks’ three pillars of transparency—finances, policies and stats on sexual abuse allegations, settlements and criminal cases—a subject covered at length in a recent City Weekly cover story.


“This is information that not only gives people power, but also keeps the church honest, too,” McKnight said. He also talked about his own personal history as a Mormon. “I thought the church always did the right thing. I truly believed it,” he said.


“That’s my message to the church,” McKnight said. “Do the right thing and let the consequences follow.”


McKnight and Dodge told City Weekly after their talk that they wanted to present at Sunstone—they’re leading a handful of discussions, and McKnight is on a Saturday panel titled, “Colorism and the Book of Mormon”—so more people would know who they are, including Mormons who think the pair are just troublemakers or LDS haters with an axe to grind. “We want to break down those barriers,” McKnight said.


McKnight and Dodge’s history lesson turned into a short Q&A before they stepped away from the podium. Asked what it would take for religious leaders to make significant changes, McKnight took the opportunity to address a demographic he suspected was in the crowd.


“My message to believing Mormons is, ‘Don’t be afraid of our site,’” he said.