The city’s mayoral race adds yet another candidate ahead of August primary. 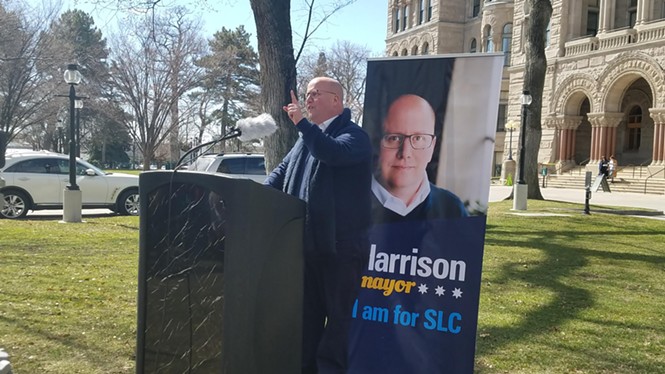 Days after incumbent Mayor Jackie Biskupski bowed out of this year’s mayoral race, another candidate has tossed their name in the arena: Christian Harrison.


The former Downtown Community Council chair told a crowd of about 40 outside the City and County Building on Wednesday four ways he thinks the city can grow: “We need to heal our city,” “We need to take control,” “We need to reboot City Hall” and “We need to face our future.”


Harrison, alluding to the Legislature’s inland port plan in Salt Lake City’s Northwest Quadrant, proposed passing a “local control amendment” to the state Constitution that would “guarantee cities the right to govern themselves.”


“From the inland port, to sales tax, from air quality to quality of life, the state of Utah regularly interferes in the internal affairs of cities across our great state,” Harrison said. “To thrive, cities need to innovate, and that’s just not possible when our relation with the state is not clearly defined.”


Earlier in March, Biskupski filed a lawsuit against the Inland Port Authority, challenging its constitutionality over usurping city land-use powers. The city council, meanwhile, has communicated with the state over the port’s plan—painting a good-cop, bad-cop relationship with the state.


“It will take a mayor with a clear and well articulated vision, one who shows up and does the hard work of governing, who attends the meetings and takes the calls,” Harrison said, referencing “opening doors” between the council and the mayor’s office. “We’ve got too much work to do to not be firing on all cylinders.”


Biskupski said this week she would not run for re-election, citing a “complex family situation.”


“As parents, we have and will always put the needs of our children first,” she said in a statement. “With that as our compass we have made a decision for our family which will require an all hands-on deck approach. As this is a private issue involving our children, that is all I want to say on the matter, and I appreciate your respect of our privacy.”


The top two vote-getters in August will advance to the November general election.


With Biskupski out of the race, it could lead to a wide-open field. According to a poll conducted by The Salt Lake Tribune and the Hinckley Institute of Politics, though, Dabakis is in the lead, with support from 26 percent of respondents. Harrison, who left his position with the Downtown Community Council in January after more than a decade, was not included in the survey. Escamilla received 6 percent, Ibarra earned 3 percent and Garbett 2.


Harrison also said he sees the relationship between the mayor’s office and the City Council as one that needs to work together.