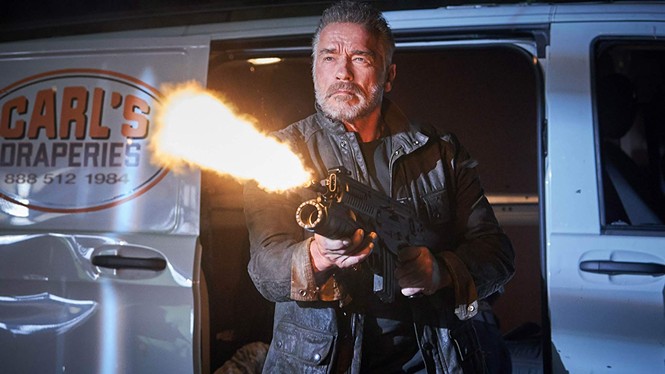 Arctic Dogs
[not yet reviewed]
Animated adventure about a fox (Jeremy Renner) trying to stop a plan for world domination. Opens Nov. 1 at theaters valleywide. (PG)

First Love ***1/2
Prolific Japanese filmmaker Takashi Miike rarely heads in the most predictable direction, so get ready for a wild journey when he combines meet-cute romance with crazy-violent crime thriller. On-the-rise boxer Leo (Masataka Kubota) learns that he has a likely-fatal brain tumor, on the same day that he gets caught up in a heist of a drug shipment by a yakuza underling (Shôto Sometani) and a crooked cop (Nao Ohmori) where troubled prostitute Monica (Sakurako Konishi) has been set up to take the fall. A whole lot of wild chases ensue, including hallucinatory visions of Monica’s abusive father, a one-armed Chinese assassin and a near-feral woman on a quest for vengeance. And it’s all crazily entertaining, capitalizing on the chaos inherent in botched-crime narratives while making that narrative utterly distinct. It’s a little much to ask for us to care about Leo and Monica as a potential couple, especially when Miike has to move back and forth between so many different subplots. But when the hilariously violent action can turn on a dime into animation that looks like it popped off a comic-book splash page, it’s best just to go along for the ride. Opens Nov. 1 at Tower Theatre. (NR)—Scott Renshaw

Harriet ***1/2
About time! One of the great true heroes of American history finally gets the big-screen treatment she has always deserved. Harriet Tubman was badass by any measure: rescuing herself from slavery with a treacherous journey north, risking her liberty and her life sneaking back into the South to bring others to freedom, working as a spy for the Union Army during the Civil War. It’s criminal that her undeniable, irrefutable heroics in the physical and existential battle for autonomy, agency and basic humanity of African-Americans have been all but ignored by pop culture, but now director and cowriter Kasi Lemmons has found a deeply satisfying balance among the contradictory currents of her story. This is an entertaining movie-movie experience that does not deny the horrific facts of slavery, one that acknowledges Tubman as a vulnerable, flawed human woman while also embracing her legend and the profound power of what she symbolizes. As Tubman, Cynthia Erivo is an immense presence, deeply engaging and incredibly empathetic. My one complaint: not enough spy stuff! Maybe we—movie lovers and proud Americans alike—will be lucky enough to get a sequel. Opens Nov. 1 at theaters valleywide. (PG-13)—MaryAnn Johanson

Motherless Brooklyn ***
Edward Norton, whose first directorial effort (Keeping the Faith) was 19 years ago, chose an odd story to adapt and direct for his follow-up: the 1999 novel by Jonathan Lethem about a Tourette’s-afflicted P.I. (Norton) trying to solve the murder of his boss (Bruce Willis). Set in Norton’s adaptation in the 1950s and infused with noir tropes like an non-mourning widow (Leslie Mann), smoky jazz clubs and clues hidden in plain sight, it’s a satisfyingly twisty Chinatown-esque story—corrupt city officials and the like—that goes out of its way to seem contemporary. (A racist New York land developer played by Alec Baldwin uses the phrase “I moved on her” to describe assaulting a woman, and adds “You can do anything you want when you have power”—subtle things like that.) Perhaps for that reason, the look of the film is anachronistically bright and digital, but the attitudes about race, gender and disability are very much of the period. For his part, Norton portrays Tourette's respectfully, though its significance to the story remains murky. Willem Dafoe, Gugu Mbatha-Raw, Bobby Cannavale, Cherry Jones and other recognizables add support. Opens Nov. 1 at theaters valleywide. (R)—Eric D. Snider

Parasite ***1/2
Income inequality has seldom been funnier than in Parasite, a scathing satire-farce-horror story from South Korea's Bong Joon-ho (Snowpiercer, The Host) in which a family of scrappy strivers, the Kims—mother, father, teenage son and daughter—weasel their way into the employ of the rich Park family, each working in a different capacity (chauffeur, housekeeper, tutor, art teacher) under false pretenses, hiding their relationship to one another from the Parks. The Kims are dishonest and have con-artist tendencies (everyone’s proud of sister’s document-forging skills), but only out of necessity, and they’re not exactly grifters: They competently perform the jobs they’ve been hired to do; they just exaggerated their credentials to get there. Bong’s commentary on the rich, the poor and the gulf that divides them is caustic but sympathetic, showing how everyone suffers in their own way. You will not guess where the story goes once these pieces are all in place, and you might not like it, but you certainly won’t forget it. Opens Nov. 1 at theaters valleywide. (R)—EDS

Terminator: Dark Fate ***
The real time travel at work here is trying to re-capture the vibe of both the original 1984 Terminator and its technologically groundbreaking 1991 sequel—and it mostly does a decent enough job. Once again, a homicidal machine (Gabriel Luna) is sent back in time from a post-apocalyptic future to kill a human (Natalia Reyes), with another entity (Mackenzie Davis) also sent back to protect that same human. Their story gets tangled up with Sarah Connor (Linda Hamilton), now a roaming self-appointed terminator of Terminators, as well as an aging T-101 (Arnold Schwarzenegger). It’s hard to ignore that nostalgia is a crucial component, including Brad Fiedel’s iconic martial score, but Hamilton transcends that with a performance that finds plenty of haunted history in her raspy line readings. As action spectacle it’s solid, with director Tim Miller (Deadpool) crafting a couple of nifty set pieces, including a freefalling military transport plane. But even if there’s not much juice in the relationship between Davis and Reyes, plus the usual head-scratching logic of time travel narratives, it’s still a nice reminder of when “I’ll be back” was a welcome promise, not a threat. Opens Nov. 1 at theaters valleywide.  (R)—SR