Movie Reviews: Call of the Wild, Portrait of a Lady on Fire, The Assistant | Buzz Blog

Movie Reviews: Call of the Wild, Portrait of a Lady on Fire, The Assistant 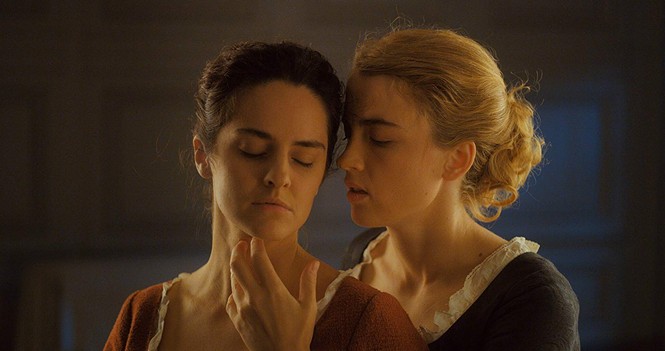 Brahms: The Boy II
[not reviewed]
A family moves into a creepy house, where their son befriends a creepy doll. Opens Feb. 21 at theaters valleywide. (PG-13)

The Call of the Wild **1/2
I’m not sure what to do with a story that’s about a dog ultimately reverting to its more primal animal nature, but pointedly attempts to make that dog as human as possible through CGI trickery. Veteran animation director Chris Sanders (Lilo & Stitch, How to Train Your Dragon) makes his first live-action feature this adaptation of Jack London’s story about Buck, a house dog who’s kidnapped from his California home and sold to be a work dog in Alaska during the years of the Klondike Gold Rush. Along the way Buck serves various masters—a mail deliveryman (Omar Sy), a foppish fortune hunter (Dan Stevens) and an emotionally wounded loner (Harrison Ford)—and there are plenty of alternately charming and PG-rating-appropriate-harrowing adventures along the way. But while Sanders understands creating a bond between an isolated protagonist and a non-human friend, it’s constantly distracting watching Buck—along with various other dogs, wolves, bears, etc.—directed to behave with computer-generated anthropomorphic specificity. It’s not bad, exactly, certainly not when Ford ultimately becomes the central human character. But because Buck never for a moment seems like a real dog, it’s just … weird. Opens Feb. 21 at theaters valleywide. (PG)—Scott Renshaw

The Lodge *1/2
There are a hundred different ways that a movie can irritate the hell out of me, and congratulations to Veronika Franz and Severin Fiala (Goodnight Mommy) for checking nearly every box. The setup finds a pair of siblings, Aidan (Jaeden Martell) and Mia (Lia McHugh), reluctantly on a holiday getaway with their father's fiancée, Grace (Riley Keough), then stuck together when they’re snowed in while dad (Richard Armitage) is away. Some offenses are mundane but avoidable, like foolishly including footage of a much better movie about people stuck together in a snowy isolated locale (in this case, Carpenter’s The Thing). Some are personal, like my disdain for using children in peril as a narrative crutch. Some indicate lazy writing, like setting up eventual payoffs in ways that either make no sense, or lack sufficient backstory to pack an emotional punch. And others are icky and irresponsible, like using childhood trauma, the legacy of conservative religion and mental illness as plot points without any real desire to take them seriously. The atmosphere is effectively moody some of the time but rarely genuinely scary, leaving little more than that ignominious checklist. Opens Feb. 21 at Tower Theatre. (R)—SR

Olympic Dreams ***
Guerilla filmmaking is at its most charming in this sweet-’n’-salty melancholy romance that’s a little bit Lost in Translation, a little bit first installment of a new Before Sunrise series. Shot on the fly by Jeremy Teicher—director, cinematographer, sound engineer, etc.—in the Olympic Village during the 2018 Pyeongchang Winter Games, this is a delicately observed portrait of a star-crossed relationship between a cross-country skier (Alexi Pappas) and a volunteer dentist (Nick Kroll) as they connect, roughly and accidentally, over the shared vulnerabilities that come with realizing your dream and not knowing what comes next. If nothing else, this is a fascinating insider-y look at life in an Olympic village the likes of which we haven’t seen before—one that Pappas, as an actual recent Olympian herself, has a unique perspective on. The documentary sensibility boosts authenticity, as does the acknowledgement of the age gap between Ezra and Penelope: She’s 22, he’s 37. The different stages they are at in their lives provides a genuine barrier to any relationship they might forge, and yet they find common ground anyway. Opens Feb. 21 at Broadway Centre Cinemas. (PG-13)—MaryAnn Johanson

Portrait of a Lady on Fire ****
Céline Sciamma’s haunting romantic drama isn’t just a glorious work of art about love; it’s about how a glorious work of art affects the way we look at love. On an island of the coast of France circa 1760, painter Marianne (Noémie Merlant) is hired to paint the wedding portrait of Héloïse (Adèle Haenel), recently returned from a convent to be sent into an arranged marriage she does not want. The two women eventually form an intimate connection, and Sciamma captures the origins of their affair with patient storytelling, breathtaking compositions and dynamic performances by Merlant and Haenel. Yet as thoughtfully as Sciamma sets the scene for what factors limit or enhance a woman’s autonomy in this time, she also frames it through artistic experiences: how shared singing creates community; how the interpretation of a story like that of Orpheus and Eurydice shapes our sense of what love is; how a painter and a subject are united by the intimacy of time together. By the time the film reaches its sadly beautiful final shot, the emotional power of great art becomes almost too much to bear. Opens Feb. 21 at Broadway Centre Cinemas. (R)—SR