'You Can’t Serve Jesus and Be a Racist' | Buzz Blog

'You Can’t Serve Jesus and Be a Racist'

Colorful characters abound during Week 4 of the Legislature. 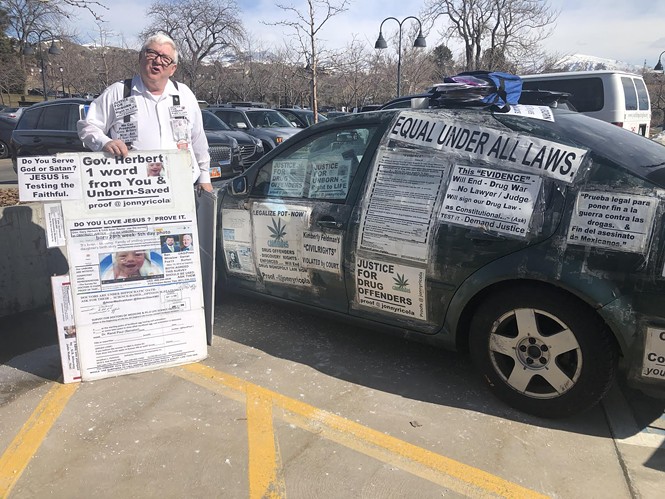 Overheard in the Capitol on the west steps leading to the House Chamber: “I could never be a politician, I’m too socially anxious to talk to total strangers.”

It wouldn’t be a lege sesh without the presence of gadfly and nonstop chatterbox Jonathan Peterson, who we ran into in the Capitol parking lot, unmissable with his black-and-white signs decrying corruption, abortion, Zions Bank, drug and gun lobbyists, racism, Goldman Sachs, the Supreme Court’s Citizens United ruling—a little bit of everything from all sides of the politi-sphere.


Then there’s his car, which has even more signs taped to the outside, essentially a mobile billboard that would cause most people to wonder, “Who’s that nutjob?”


But Peterson is fairly harmless, unless you have to be somewhere in a hurry. As soon as he makes eye contact with you, you’re his. And since you are a Very Nice and Polite Utahn, you will stand and smile and nod as he starts in. One minute goes by ... two minutes go by ... 10 minutes go by. It’s all a blur.


“I’m a person of faith, but understand that faith should not be involved in Constitutional defense ... you can’t serve Jesus and be a racist ... bribery is accepted as lawful in this nation ... our drug monopoly laws cause suffering of the poor and minorities ... the actual beginning of life is when a fertilized egg cell begins animation ... the killings of 125,000 baby human beings worldwide is genocide ... Citizens United was crap ...”


You tell him you really have to go, but another five minutes (it will only feel like 20) will pass before you actually do.


Peterson will eventually stuff your fists with laminated fliers detailing his go-to topics—lamination makes it impossible to just crumple them up and throw away.


He’s probably one of the happiest people on the hill, an almost daily presence. Ask to snap his photo, he’s thrilled to oblige. Tell him to keep fighting the power, he chirps back with an enthused “You know it!”


“I love my brothers and sisters, atheists, Muslims, homosexuals, because they have a right to their life, but nobody has a right to screw over your neighbors,” Peterson says. “God bless!”


I spot Peterson again days later outside the Pete Buttigieg rally at the Union Event Center. I do not make eye contact. 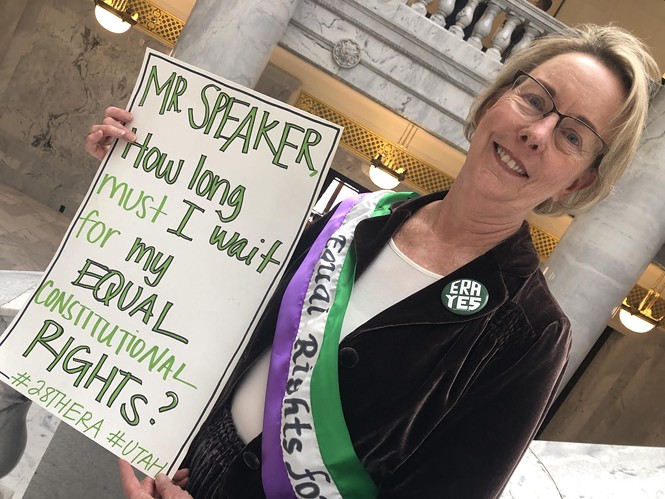 Cosplayers With a Cause

Even cosplayers have their moments at the Capitol.


Cosplayers with a cause, of course. Like Robin Hough, who’s dressed as a 1920s-era suffragette, a purple, green and white sash wrapped around her that reads EQUAL RIGHTS FOR WOMEN and clutching a sign that reads “Mr. Speaker, how long must I wait for my equal constitutional rights?”


Hough is here with the Utah ERA Coalition, some 30 orgs including Equality Utah, the United Church of Christ, the Salt Lake Acting Company and Mormons for ERA. They all support the passage of House Joint Resolution 7, which would ratify the Equal Rights Amendment to the U.S. Constitution.


“We want Utah to be the 39th state to ratify the ERA,” Hough says. “It’s the right thing for Utah to do. I’m here being a Silent Sentinel. One hundred years ago, when women were trying to get the right to vote, they stood out in front of the White House in silent protest. They were beaten, arrested, force-fed and thrown in prison. So we have women up here in the Capitol also being Silent Sentinels,” she continued. “I’m not being very silent, though!”


As the legislature revs up to its March 12 conclusion, characters, moments and oh, yeah, controversial bills—like the proposed repeal of Prop 4—are sure to enter overdrive. Check back for updates.