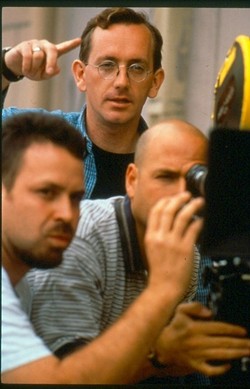 Twenty years ago, an independent drama by a local filmmaker named Richard Dutcher launched an unexpected phenomenon that came to be called "LDS cinema." For the 19th annual LDS Film Fest, the movie that started it all gets a center-stage recognition.

Dutcher (center, left, on the set of God's Army) is scheduled to attend tonight's opening night screening of God's Army at the SCERA Center for the Arts in Orem at 7 p.m. for a post-film Q&A.

Screenings continue through Saturday, Feb. 29, showcasing other films from the past two decades of LDS-themed films, including Dutcher's 2001 Brigham City, the popular 2002 comedy The Singles Ward and its 2007 follow-up The Singles 2nd Ward, and historical dramas like Handcart and Out of Liberty.

Outside of film screenings, programming is scheduled to include filmmaker showcases and panels on Friday and Saturday, covering topics like distribution for independent filmmakers and adapting to the faith-based marketplace. Dutcher will also be one of the featured panelists, at 1 p.m. on Saturday. Visit the festival website for full schedule and information on individual screening tickets and full-festival passes.