City of Lies **
The appeal of a “lone crusader for justice” narrative is undeniable, but this adaptation of a fact-based story centers that idea to the detriment of all the messiness that could make it most compelling. In a framing structure set in 2015, journalist Jack Jackson (Forest Whitaker) seeks out former L.A.P.D. detective Russell Poole (Johnny Depp) for a retrospective on the March 1997 murder of Christopher “Notorious B.I.G.” Wallace, launching a flashback to Poole’s investigation and discovery that corrupt cops might have been involved in Wallace’s death. For a while, Christian Contreras’s screenplay builds the complexity of the racially-charged 1990s events informing the Biggie case, including the Rodney King beating and the O.J. Simpson verdict. But eventually it turns into a focus on the straight-arrow Poole running into institutional road blocks as he tries to put the pieces together—think of a cross between Serpico and J.F.K.—and a few awkward attempts to connect to more recent instances of police violence. While Depp plays Poole with an effective sense of disillusionment in the contemporary scenes, and Whitaker does his best in the role of a muckraker re-discovering his own idealism, those conventional beats aren’t nearly as interesting as the very specific milieu. Available March 19 in theaters. (R) 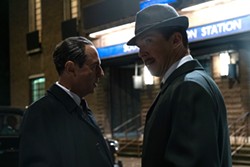 The Courier **1/2
Whatever marketing- or algorithm-driven reason there might have been for changing the title for Ironbark (which it screened under at Sundance 2020) to The Courier, it ends up appropriately representing a kind of bland functionality. Director Dominic Cooke and screenwriter Tom O’Connor adapt the true story of Greville Wynne (Benedict Cumberbatch), a civilian British businessman recruited by MI6 and CIA operatives to become a contact for Oleg Pankovsky (Merab Ninidze), a Soviet officer who begins providing intelligence on the country’s nuclear program. The performances are uniformly strong, from Cumberbatch and Ninidze conveying the unusual friendship between the two improbable spies, to Rachel Brosnahan as Wynne’s CIA handler, to Jessie Buckley adding depth to a potentially thankless role as Wynne’s increasingly suspicious wife. It’s simply hard for this story to build a lot of tension or narrative momentum around the handing off or picking up of various envelopes full of microfilm. And while the third act events—involving the consequences for both Wynne and Pankovsky—really happened, it feels like the stuff of another movie entirely, rather than one about a single connection between two men potentially winning the Cold War. Available March 19 in theaters. (R)

Perfumes ***
I wish it didn’t feel like a veiled insult to suggest that writer/director Grégory Magne’s film is exactly the kind of genial, character-based comedy-drama that will almost certainly be remade in English within three years. Grégory Montel plays Guillaume, a driver for a car service whose latest client is Anne Walberg (Emmanuelle Devos), once a celebrated designer of upscale perfumes, now relegated to using the talent of her discerning nose solving problems like masking the scent of badly-tanned leather purses. The narrative is built entirely around the dynamic between the two main characters—Guillaume an underachiever trying to win joint custody of his young daughter (Zélie Rhixon), Anne a loner obsessed with her work—and the performances are both terrific at making it clear that this could be a genuine friendship rather than a budding romance. The inevitable bumps in the road, mostly involving either Anne’s health or Guillaume’s parenting, mostly prove to be distractions, when the star here is simply the chemistry between Montel and Devos. It’s a story that keeps you smiling without amping up the drama, leaving plenty of time to wonder who will play the leads when the remake arrives, and whether they can manage that same chemistry. Available March 19 via SLFSatHome.org. (NR)

Wojnarowicz: F—k You F—got F—ker ***1/2
Documentary artist profiles perpetually run the risk of not being nearly as interesting as simply spending time experiencing the artist’s work, but director Chris McKim takes advantage of an amazing treasure-trove of first-hand material to provide a terrific profile of both a man and his creative output. The subject is David Wojnarowicz, following his life and career from runaway street hustler fleeing an abusive home, to fledgling artist in the East Village scene of the late 1970s and early 1980s, to vocal activist over government policies involving AIDS and arts funding. Though Wojnarowicz died in 1992 at the age of 37 of AIDS-related causes, his voice is all over Wojnarowicz via audio journal entries, allowing his personality to emerge as much through first-hand means as through the recollections of friends and contemporaries like Fran Lebowitz. The film is also a great introduction to Wojnarowicz’s painting and multimedia work, and the controversies it often became a part of. Yet this story might actually be strongest at the end, as Wojnarowicz throws himself into challenging conservative anti-gay rhetoric and policy-making in the wake of his own AIDS diagnosis. It’s a powerful moment to watch someone almost shocked to realize he’s lived long enough to make a difference. Available March 19 via SLFSatHome.org. (NR)