A year after the city launched a poll to reboot its flag, Salt Lakers are still waiting for a tattoo-worthy design. 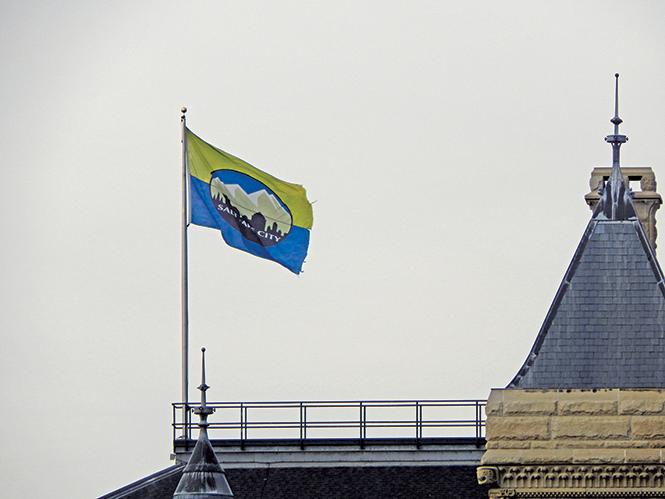 Air quality. Homelessness. The inland port. These are all pressing issues Salt Lake City Mayor-elect Erin Mendenhall will be tackling as she takes over Jackie Biskupski's seat in January.

But in the transition between administrations, there is another question that lingers: What about the flag?

Banner Decisions
Prompted by City Weekly, five local artists have a go at creating the perfect SLC flag.
We gleefully awaited news on an outside-the-box approach to coming up with a new flag design. Instead, we got an online survey.
By Enrique Limón
Buzz Blog

The Salt Lake City flag has been the subject of public scrutiny ever since it was first unfurled in 2006 under the administration of then-Mayor Rocky Anderson. Anderson launched the redesign in an effort to change the previous flag, a childlike rendering of the first pioneers of 1847. The one that flies high now represents an improvement, but still doesn't quite meet the design standards of modern-day flag experts.

According to the North American Vexillological Association, an organization devoted to the study of flags, a winning banner should follow five criteria: Be a simple design, have meaningful symbolism, use just two or three colors from the standard color set (i.e. red, yellow, green, blue, etc.), have no lettering or seals on it (which are impossible to make out from a distance) and stand out as a fresh take on flag conventions. 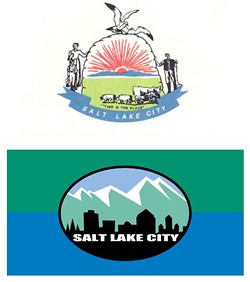 The SLC flag clearly violates at least two of the aforementioned rules. It's splattered with no less than six different colors, including multiple shades of pastel green and sky blue. The center features an illustration of the cityscape, with the words "Salt Lake City" blaring in all caps. The design isn't as bad as the former flag of the Idaho city of Pocatello, deemed the worst city flag in America by NAVA in 2004. But Salt Lakers do think there's room for improvement: In a public survey of 2,000 residents conducted last year by Biskupski's office, more than 75% of the respondents were in support of a redesign.

So, who will be the local hero to take up this cause?

Biskupski has had a busy year—too busy, in fact, to follow up on the 2018 survey. Rojas says she won't be tackling the issue in the month-and-a-half she has left before leaving office.

As for Mendenhall, it's hard to say whether she'll take action. Last month, when she sat down with us for a Q&A during the general election race, she didn't have much to say on the topic.

"I'm not a flag designer, I'm a politician. But Salt Lake City needs a rebranding—it needs more than a new flag," she said. Asked this week to elaborate, Mendenhall spokesman Ian Koski said she declined to comment.

The lack of interest in a new Salt Lake flag stems from the fact that there's simply more important things to worry about, observes Tim Chambless, an associate professor in political science at the University of Utah. Yet Chambless doesn't discount the power of civic symbolism, noting that the Utah Jazz made a splash in the NBA this season when they brought back their classic purple jerseys from the team's late-'90s heyday, emblazoned with craggy peaks suggestive of the iconic Wasatch Range.

"When the Jazz play, they have their uniforms that show snow-capped, jagged mountains. They're sending a symbol of Utah that's seen all over the world," Chambless says.

What concerns Ted Kaye—secretary of NAVA and author of the flag design booklet Good Flag, Bad Flag—is that Salt Lake City will do what so many cities have done in the past, deferring to the branding of their sports teams to do the heavy lifting of representing the city. The problem is that sports teams can move out of town, or change logos in a flash.

"Ceding that territory gives up an opportunity for the city to really represent itself," Kaye says.

He thinks Salt Lakers can do better.

"I've got a rule of thumb that shows me when a city's symbol has become truly a part of its civic consciousness, when it's truly been embraced by the citizenry—and that's when the flag starts showing up as a tattoo," he explains. "I would guess that nobody's got a flag tattoo of the current Salt Lake City flag. But there are lots of tattoos of the Washington, D.C., flag, the Chicago city flag. There are other cities that have great flags that people use as tattoos, because it's the symbol of the city."

Although not yet immortalized on skin, other Utah cities and towns have done flag relaunches to much fanfare in recent years. Provo unveiled a new design in 2015, and the humble Utah County city of Elk Ridge adopted a flag in 2017—the first since the city's founding in 1971, depicting a giant elk superimposed over horizontal bands of blue, white and green.

In Biskupski's public survey, according to Rojas, most of the respondents called for a new flag that would incorporate a design reflecting the Wasatch Mountains, one of Salt Lake City's most iconic natural landmarks. Many wanted to include symbolism like a star or a beehive, indicating the city's Beehive State capital status. Respondents also recommended the city reach out to members of Shoshone, Paiute, Goshute and Ute tribes to incorporate elements of indigenous culture native to the Salt Lake Valley.

Bart Powaukee, a Utah environmentalist and member of the Ute and Nez Perce tribes, says it would be tough work to come up with one symbol that could represent the many diverse voices and cultures of Native Americans who have roots in what's now the state of Utah.

If he had to pick one thing, though, he recommends an image of the eagle staff—a sacred wooden staff that has traditionally been used to represent a range of meanings, clans, languages and nations. Powaukee says it's also emblematic of Native American unity.

"Before any outside contact with, say, the Caucasian people, white people, we carried these staff wherever we went, and that signified who we were," Powaukee says. "You could say that staff represents all Indian people."

According to Rojas, the current flag has a relatively low profile. Only a couple dozen of them are flown in public, mostly at parks, government buildings and fire stations. There's also a rogue flag flying in Exchange Plaza, an off-the-beaten-path public square sandwiched between some downtown businesses. The city never put this flag up, and nobody in City Hall knows its provenance, Rojas says.

An employee at Twist, a bar located in the plaza, also didn't have any info on the flag when City Weekly called to inquire about it.

"I didn't even know Salt Lake City had a flag," he said.