Homeless advocates and activists call for The Road Home to stay open through the winter months. 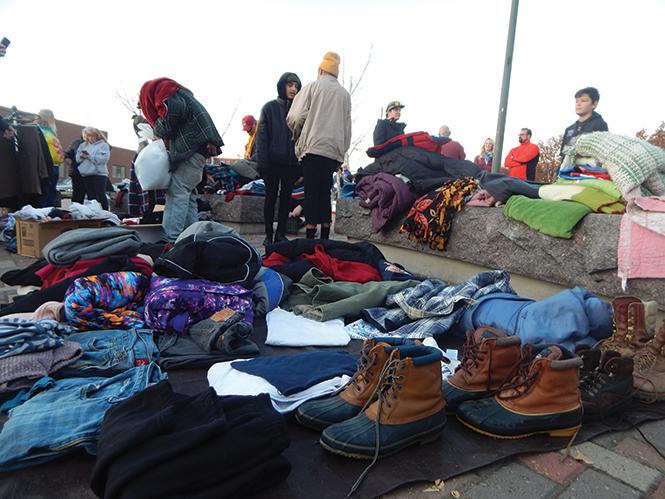 The late-afternoon chill descended as men bundled up in coats perused the donations on display on a brick traffic island near the imposing Rio Grande Depot.

Coats, blankets and boots were laid in rows and piles, ready for anyone to pick up and try on. Protesters from half a dozen community groups served hot chocolate and homemade snacks. A young activist in a long coat got on the mic to rail against what many see as another act of injustice against Salt Lake's homeless—the imminent closure of The Road Home's downtown shelter, located just up the street.

"People over profit!" the activist screamed, leading the crowd in a chant.

The 1,100-bed shelter, run by The Road Home, is set to close in a matter of weeks. Men currently staying there are being relocated to a recently opened service center in South Salt Lake—a transition that's part of a new countywide model, in which beds and resources will be focused around three centers dispersed across Salt Lake City and South Salt Lake, providing resources to (ideally) get people off the streets and into affordable housing.

"With so many women that are in the overflow, what are they going to do with them when the first snowfall comes?" —Understanding Us' Maria Humphrey tweet this

In total, the new service centers only have 700 beds, some 400 fewer than The Road Home, and many worry that shutting it down now will lead to homeless people being stranded amid sub-zero temperatures and thick snow. As government officials scramble to fill the void, some question the wisdom of closing down the state's largest-capacity shelter in the lead-up to winter.

"It's hard to see how moving 100 more people into housing in one month is going to reduce the demand the next month," Bill Tibbitts, associate director of the Crossroads Urban Center, a local advocacy group and food pantry, says of Lt. Gov. Spencer Cox's recent "call to action" to get landlords to offer up housing for homeless persons.

"It's a temporary blip. It's not a structural change. It's not a permanent change," Tibbitts contends.

It goes without saying that winter is a dangerous time for people without a warm bed. Laurel Ingham, development director for Fourth Street Clinic—a downtown community facility that serves the homeless—says folks with diabetes can lose circulation in their feet if they're not kept warm and dry. Someone dealing with drug abuse could pass out and end up freezing to death. The wetness of the snow and below-freezing temperatures have lead to hypothermia and frostbite.

"We've had patients in the past who have lost fingers and toes," Ingham says.

It's for this reason that homeless advocates are calling for The Road Home to stay open until April.

"I think it's a big mistake," Maria Humphrey, 51, the program director of Understanding Us—a local nonprofit that organizes tai chi sessions for the homeless at Pioneer Park and the downtown library—tells City Weekly. Humphrey was once homeless herself, and she worries what will happen to women now spending nights in an overflow area at the St. Vincent De Paul dining hall, sleeping on mats because there's not enough space in the new women's resource center.

"With so many women that are in the overflow," Humphrey says, "what are they going to do with them when the first snowfall comes?"

City and state officials say they're working hard to make sure nobody gets left out in the cold. The state recently pledged up to $1 million toward a housing push, and as of last Friday, about 20 landlords had offered up a total of 77 units for people currently living in shelters, according to David Litvack, deputy chief of staff for Salt Lake City Mayor Jackie Biskupski.

Litvack says the city is aiming to provide apartment units for 67 people as part of the housing push. Nearly half of the individuals selected already have housing assistance vouchers and case managers to help them transition into a home. Another 20 individuals have been identified as needing some emergency housing assistance—for example, they might be behind on rent or can't afford utility bills. The last 20 are chronically homeless individuals who have stayed 365 days or more in shelters cumulatively over the past several years. By moving them into housing, the hope is to make space in the resource centers for those who seek out shelter on a temporary basis.

"Our goal is to really meet the need long-term, and to bring in new landlords and new units and create the process that becomes the way we operate on a regular basis," Litvack says.

Part of the new model aims to have people staying in the resource centers for less time than they would in a shelter, according to Nate McDonald, spokesman for the Utah Department of Workforce Services. The new centers include case management and other services that, officials and nonprofit service providers hope, will get people into housing quicker. A 100-unit housing development for the chronically homeless, dubbed Pamela's Place after celebrated homeless advocate Pamela Atkinson, is set to open next year, along with other affordable housing units.

But as efforts to open all of the new service centers have dragged toward the winter months, officials are now faced with a shortage of available beds and housing options. McDonald says the record-low nighttime temperatures in October brought about a sudden rise in demand for shelter space. The state also is seeing a shortage in available subsidized housing—officials originally projected 634 units in the system, but currently there are only 457.

Rather than keep The Road Home open, officials are aiming to address the shortages in other ways. Individuals have been given vouchers to spend nights in hotels. There's also been discussion about turning the Weigand Center—a community space run by nonprofit Catholic Community Services—into a "warming station," extending the operating hours through the night for homeless folks seeking refuge from the cold and in need of a warm bed.

"We've had a very good response in one week," McDonald says.

Long-term, advocates wonder if the "housing first" approach—first adopted by the state in 2005—will continue to be sustainable amid a growing homeless population. Frustration and distrust remains from Operation Rio Grande, the police crackdown on the Rio Grande neighborhood launched in August 2017. Salt Lake Valley is also in the middle of a housing crisis, with rising rents and limited options for low-income tenants.

As the protest outside the depot wound down last week, a 47-year-old formerly homeless man who went by the name Africa strolled by. Bundled up in a coat and hat, he snacked on a plastic tray of tiny cupcakes as rapper Master P bumped out of speakers installed in his backpack.

Up until two months ago, Africa spent nearly a year living at The Road Home. He's fine with the 31-year-old facility closing down now.

"It's been here too long. It's done its purpose," he said. "Some people say they should leave it open—I don't see any use for it now."

Still, he wonders if the new approach might be serving other purposes.

"I don't think this whole thing is solving the homeless problem," he said. "I think they're just scattering [the homeless] around town. They don't want them in one congregation."