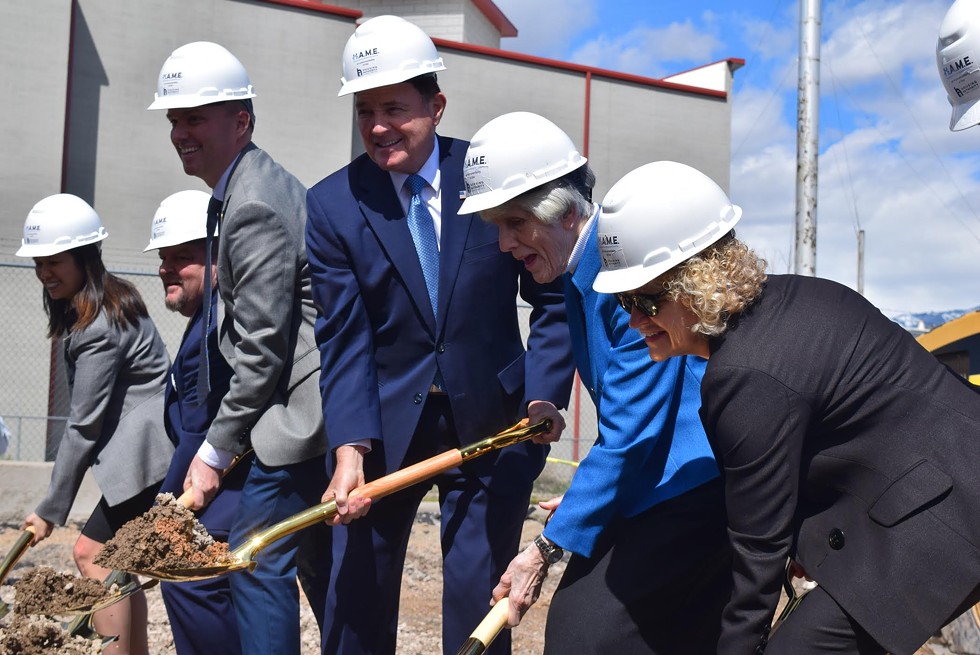 
Pamela’s Place Apartments, as it will be known, will provide 100 units of “permanent supportive housing” for people who are either transitioning out of homelessness or are very low income. Rent is about $700 per month, and tenants will pay an estimated 30% of that cost.


The development is the latest step in the city’s effort to combat homelessness in the wake of Operation Rio Grande, the homeless initiative that was launched in August 2017.


“When I took office, it was clear that one of the things we needed to immediately tackle was how are we going to transition our people from new resource centers to housing?” Salt Lake City Mayor Jackie Biskupski said at Wednesday’s groundbreaking ceremony. “We understood that people experiencing homelessness have varying issues to tackle and in some cases, people need more assistance than others.”


The facility, located at 525 S. 500 West, will also include a 4,000-square-foot medical facility, 24/7 on-site staff, vegetable gardens, a pet area and a remembrance garden. If you’re a member of Salt Lake’s drinking contingent, you might recognize the locale as the former Devil’s Daughter bar location. That building has since been razed to make way for the complex as well as a new housing development utilizing shipping containers next door. It’s also conveniently located across the street from another homeless-oriented housing complex known as Sunrise Metro. “When I ask my homeless friends, ‘What do you need?’ they’ll say, ‘I just need a roof over my head. I need housing, Pamela. I just need a small room, that’s all I need." —Pamela Atkinson tweet this

Of course, the groundbreaking wasn’t just about helping the homeless. The day was meant to recognize Atkinson as well. The homeless advocate spends countless hours helping those less fortunate find resources as well as pushing state leaders to make those resources available. Her name can be found at other places too, such as the Pamela Atkinson Center at the 4th Street Clinic, the Pamela Atkinson Clinic at Liberty Elementary School and even her own Pamela Atkinson Homeless Trust Fund, which Utah taxpayers can contribute to on their yearly tax forms.


“Pamela Atkinson is well-deserving of this recognition,” Grant Whitaker, president of the Utah Housing Corporation, said. “I don’t know anyone who has been doing more for the disadvantaged than her in so many fields, not just housing, so to have a place named after her is more than appropriate.”


According to 2018’s Point-in-Time Count, the annual tally of homeless persons in Utah, about 15,000 people in the state experience homelessness for some amount of time throughout the year. Additionally, the count found that 222 veterans experienced homelessness on one selected night, while nearly 2,900 people were found to be homeless statewide.


Atkinson and other state leaders, such as Gov. Gary Herbert and Lt. Gov. Spencer Cox, touted the need for “housing first.” Atkinson said once housing is secure, it makes other barriers homeless individuals encounter easier to tackle.


“When I ask my homeless friends, ‘What do you need?’ they’ll say, ‘I just need a roof over my head. I need housing, Pamela. I just need a small room, that’s all I need. I’m happy to share a bathroom, a toilet and a shower,’” Atkinson said. “For many of our homeless friends, those needs are small, and that’s why this project is going to be great—housing does come first.”


Atkinson, while appreciative of the recognition, didn’t miss a chance to continue her tireless work. In the Legislature’s most recent general session, legislators moved to allocate $24 million of the budget for affordable housing, but that was scrapped on the final day.


“The governor knows how important housing is, the mayor knows, the lieutenant governor knows … the Legislature knows, and they apologized profusely at the end of the session that they took out $24 million,” Atkinson said to a few chuckles from the crowd. “At the last night of the session, I made it clear to them at 9 o’clock at night, that apologies are not going to help. You didn’t bring forth your commitment … absolutely promise that next session.”