Not Ready to be Homeless

For working families, it's easy to get stuck in the chasm between normal life and the shelter 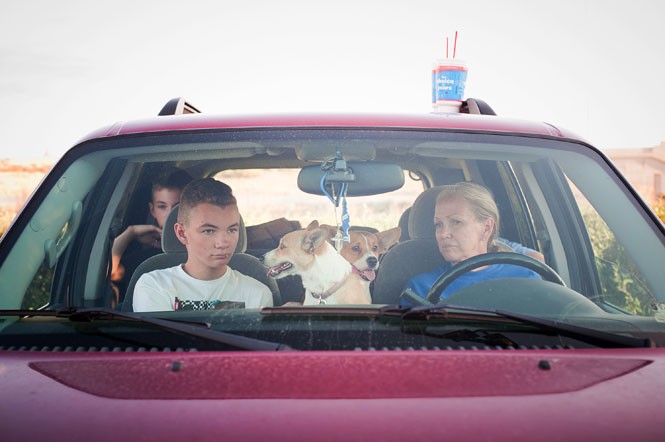 On an August afternoon in Jordan Park in Salt Lake City, a member of the Volunteers of America homeless outreach team approached 16-year-old Austin Cordero. Did he know anyone who was homeless?

For Cordero, his 14-year-old brother, Kacey, and their mother, Victoria, home is a red Ford Explorer that they sleep in on the parking lot of a west-side truck stop. They share the car with their two chorgis, Gracie and Mikey. Victoria's son by a prior marriage, 32-year-old Seneca, whom she calls "a night owl," also sleeps a few hours in the car each night.

Victoria often sleeps semi-reclined in the driver's seat, if her degenerative spinal discs don't cause her too much pain. Austin sleeps across the back seat, and Kacey, his mother says, "makes a nest in the back." As night falls, she and her sons congregate with a few of the "in-betweeners," as she calls those parked near her—fellow homeless individuals with resources to maintain a vehicle but not a home.

The Corderos are not alone in their predicament. Since the recession, the demand for family services at The Road Home, the downtown Salt Lake City homeless shelter, has mushroomed from 183 families in 2007 to 681 in 2014.

The Road Home's response to the homeless-family crisis was the Rapid Rehousing program. The shelter finds apartments for families to rent and pays the initial deposit. Rapid Rehousing saw 87 percent of the 1,100 families it placed with landlords from 2009 to 2012 "remain successfully housed," according to the shelter's website.

To attain that financial support, you have to go into the shelter, where it typically takes six weeks—if there's not a problem with paperwork or a family member's criminal history—to get into housing.

And shelters aren't for everyone. The truck stop's air is heavy with the rumbling of idling truck engines, their exhaust occasionally mixed with a sulfuric smell from nearby refineries. But Victoria and her boys regard the parking lot as preferable to a downtown shelter.

"I just want to go to work, my kids to go to school and be normal teenagers," says Victoria, who has two part-time jobs. "They just want everybody to be in the system." But, she says, going to The Road Home is "not practical if you're working, even less practical if you're working two jobs. It doesn't seem fair to want to make it even more disruptive in order to get help. I consider us at ground zero. You have to put yourself on the other side of ground zero by going into a shelter. You have to totally demean yourself."

Falling Through the Cracks
The Cordero family moved back to Salt Lake City, where the boys were born, almost two years ago to get away from Victoria Cordero's abusive ex-husband. His March 2013 death in a traffic accident left Cordero without child support. Bureaucratic problems with Social Security meant the family also didn't receive its June 2013 survivors benefits, and they were evicted from their West Valley City apartment complex. Cordero filed a pro se response in court contesting the eviction but, as she wrote in a letter to City Weekly in November, 2013, the complex's "management didn't want to work with us, so our info went to the attorney and we went to the street."

They moved in with a couple from their church for eight months. Living with another family "was a daily reminder of what you don't have," Cordero says. "A home is somewhere where other people have to knock on the door, not you."

Her church friends, she says, asked them to move out to make way for relatives who were moving in. Cordero and the boys went to a weekly hotel but couldn't afford it, so they made their car into a home. 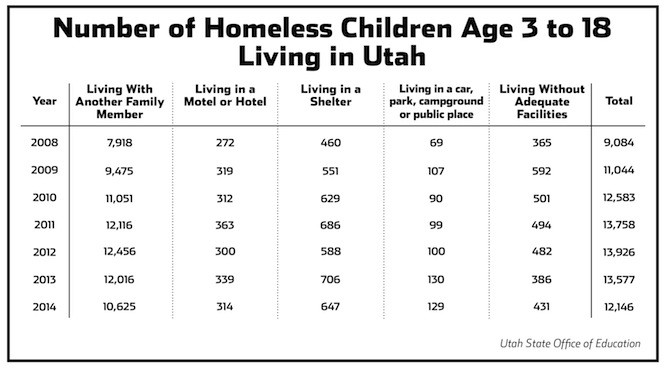 Cordero has two part-time jobs, one at JC Penney and one packing up people's houses for a moving company. She gets $1,500 a month in death benefits for her two youngest sons and anything from $300 to $800 a month from her jobs. Despite this income, she cannot find an apartment to rent. Landlords charge up to $80 to process an application, so she has to choose carefully the apartments she applies for. Getting approval from an apartment means coming up with two months' rent and a deposit for her dogs, which can be as high as $600. Landlords, she says, don't want a tenant who has been evicted and don't like death benefits because, she says they have told her, they can't go after them if she stops paying rent.

But, Milner says, there are plenty of stumbling blocks in the way of families who do manage to access housing, such as garnishments from evictions, where evicted tenants are "absolutely shackled with attorney fees," which are legal in Utah. "It can be a razor's edge from being homeless again."

Submitting to the System
Volunteer of America's homeless outreach worker Larry Mullin says the VOA's three-person outreach team encounters five types of people on the streets of Salt Lake City: the persistently mentally ill, those with drug addictions, those hit by a perfect storm of circumstances that have forced them to the street; second or third generational homeless; and a combination of any or all of the above.

City Weekly outlined the Corderos' situation to Kerry Steadman, community-services manager for Salt Lake County, who says there is "a kind of gap" when it comes to those "who are in between, who are not really poor, don't have a lot of money." How many are in this gap, Steadman can't say. Federal and public assistance is designed to target low income individuals, he says, but "here's a person who probably makes more than that but who doesn't make enough to get by. The family can't take advantage of what's out there now, so they're kind of caught."

Milner says Victoria should be commended, given that being a single mother raising two teenage boys is "a hard lifestyle even if she was housed." While he argues that "we have to uphold her desire for independence," at the same time, he says, she has to submit herself to the system to access resources.

But, "If you see yourself as working, you're not typically homeless in your mind, it's pretty brutal to come to terms with," Mullin says. He works with a 23-year-old man who lives behind a shopping mall, works temporary jobs and refuses to go into the shelter. His perception "is he sees people lined out front, the drugs, the violence," rather than understanding that he can walk in there and go to his own bed.

Mullin believes Cordero, too, is unaware of the resources she can access at The Road Home or through church or civic organizations that would "help her get the first month rent down. It's a matter of negotiating resources, of knowing how to use that ladder."

Cordero says she's tried accessing state and federal resources, but her shifting day and evening work hours make it difficult to get to agencies when they are open. She went to the Volunteers of America youth shelter on State Street but it was closed. Section 8 housing assistance, she learned, has a two-year waiting list. Family Promise, which works with local churches to provide a rotating list of temporary accommodation for families before they are moved into apartments, had a month-long waiting list to use their services.

Hopelessness and homelessness inevitably feed off each other, Milner says. "Depression makes you not advocate yourself. You learn there's a wait list and dogs aren't taken, and you leave." Shelters typically "don't address families who don't access services," Milner says. "There is that point where we need them to come into the shelters to get served."

Most of Cordero's concerns about The Road Home can be resolved, says the shelter's clinical director of services, Michelle Tschetter. Road Home residents can work evening hours if they have letters from employers confirming the work. And Minkevitch says that pets can be housed if their owner has a note from their case manager and signs an agreement to clean up after them.

But, Minkevitch says, "I would love this woman not to have to come into this shelter. I would love there to be a mechanism that helps her bypass the meager offering we have to provide—not to diminish the work shelter folk do. But the shelter is a last-resort option."

The Road Home has 31 austere, cell-like units where a family can close the door for privacy. These are earmarked for families with newborn babies or sick children. Other families live in the chaotic, noise-filled dorms, lined with bunk beds and housing as many as 60 families. Tschetter says it's tough for children who are homeless. Potty-trained toddlers sharing bathroom facilities with adult strangers often regress to diapers. "You can't have slumber parties here," she says dryly. "A lot of kids are parentified at an early age."

Minkevitch says it would be hard for him to bring his family to the shelter. "If I couldn't get a private room, I'd consider a car, too."

A Chill in the Air
The solution Minkevitch wants to see created "is an ambitious number of affordable [low-income] housing units in our community." But "the only development going on here is high-end. We have to reduce the headwind that housing developers are facing to get those units created."

Affordable housing in the shape of several thousand units, he says, would help solve "90 percent of the problem" of homelessness in Utah.

But for now, as far as emergency shelter goes, it's primarily The Road Home and Family Promise that homeless families must rely on.

Each "guest" family—the "h" word is banned at Family Promise—is a puzzle that requires solving, Milner says. Federal funding through HUD has in recent years placed more emphasis on verification of the homeless status of those applying for help. HUD asks, in essence, he says, "yes, but are you really homeless?"

Cordero says people often suggest options she's already tried, "and because it's not their problem, they don't want to deal with it, they just want you to go away. ... People act like you're contagious. You mention you're homeless and the conversation falters, people wander away."

She hears about mobile parks in Grantsville or Tooele, but that means the boys having to start in a new school district and being stuck in a small town. Day after day, Cordero shuffles her children to the mall where she works or leaves them with the car and the dogs at the truck stop. As fall approaches and the Cordero boys start the academic year at Granger High School, their mother knows that things will only get tougher for her family.

Depression settles in, and she has "days on end going through the motions," she says.

"I just feel it won't end, that things aren't going to get better."