At first glance, he just looked wasted. A man lay passed out on a curb, unconscious to the world, but with an unlit cigarette clenched between his teeth.

Then he stopped breathing.


A girl in a blue coat suddenly appeared over the man, begging with slurred words for him to wake up, hitting him in the heart with short, sharp punches, until at last he began to cough.

The woman chalked her trick up to things you learn from being on heroin. No sooner had a staffer from the Weigand Homeless Day Center called an ambulance to Rio Grande Street, in Salt Lake City’s Gateway neighborhood, than the woman disappeared.

The man’s breath, however, was slow and wheezing. Next to him, another man dropped quickly to his knees and folded his hands in front of his bowed head, reciting a quick and desperate prayer while a small crowd gathered, smoking cigarettes and watching. A man in a camouflage jacket strolled by without a second look, offering: “Just kick him in the ass, he’ll get up.” The man remained on the ground, eyes closed, a pained look twisting the features of his face. A slow stream of thick snot oozed from his mouth and nose, bubbling with every ragged breath.

As the paramedics cleared his breathing passage and loaded him onto a stretcher, an elderly black woman rolled into the courtyard, pushing a cart decorated with a bright-gold Christmas wreath.

“Another body taken by the plague!” she bellowed. “That’s what that is right here, a plague!”

Then the residents of Rio Grande Street shuffled past the scene, heading inside the St. Vincent de Paul Center for a lunch of hard bread, ground beef, sugar cookies and salad. Just another day and another routine ambulance call—one of 63 to that street in 2012.

The plight of Salt Lake City’s homeless is perhaps the most tragic news story that isn’t. It’s not news because the suffering and despair of those who have fallen through the cracks is anything but new. The homeless lack the money, health and opportunity for stable work to get them off the street, but they manage to scrape together enough money for the poisons that keep them there.

I spent hours on the street, ate meals at the St. Vincent de Paul Center and, while the weather was still warm, spent a night at the Road Home men’s shelter in close observation of this nexus of support, warm beds and meals—and cold streets and hard drugs. 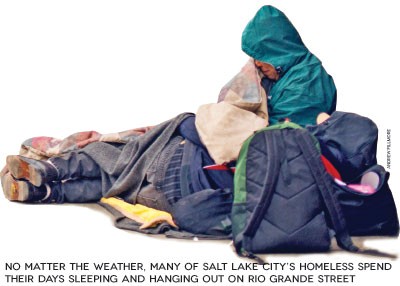 In the politics of poverty, a typical soundbite refers to those who have “fallen between the cracks.” To stroll down Rio Grande Street is to see firsthand what life looks like between the cracks. People with drug problems, criminal records and mental illnesses clot the south side of 200 South, west of 400 West, just across the street from the cheery Gateway mall on the other side of 200 South.

My observations are also backed by disturbing statistics of police responses to this block, in a city of nearly 200,000. In 2012, this one block saw police respond to 82 calls for simple assault, 19 complaints of aggravated assault, 24 calls for dealing with mentally ill citizens, and eight suicide attempts. In 2012, Salt Lake City as a whole saw the deaths of 52 homeless individuals, whose years of substance abuse and inadequate care likely hastened their demise.

It’s a mini-community where the chronically homeless, the newly homeless and those just passing through take to the food lines and shelter dorms as if they were replicating the social cliques and rituals of high school—gossiping, laughing, and hanging out with friends. Some don’t have friends and talk only to their lapels and the people nobody else sees. Lapel talk ranges from the sad and quiet: “If anyone should be calling anyone names, it’s you”; to the quiet and disturbing non sequiturs: “shit-stained, pee-stained panties!”; to the loud and bizarrely political: “Condoleeza! Condoleeza fucking Rice!”

The 2013 Legislature will decide this session whether or not to expand Medicaid as part of President Obama’s Affordable Care Act, with federal money ready to usher in new homeless services and substance-abuse treatment. The conservative Legislature will likely defiantly decline the expansion as wasteful federal spending (See “Who Deserves Health Care?” Jan. 31, City Weekly). But if the state’s conservative lawmakers say no, what will Salt Lake City’s progressive city and county leadership do?

A few members of the Salt Lake City Council are eyeing possible reforms for low-income housing options. A spokeswoman for Democratic Salt Lake County Mayor Ben McAdams says his office will continue the same level of “facilitating” it always has between its existing homeless services committees and nonprofit networks.

Local government historically just passes federal block grants onto community nonprofits. Jesse Fruhwirth, a former City Weekly reporter and now a full-time activist, points out that while local governments may be stingy with city dollars to help treat and house the homeless, they have no trouble paying police to deal with the effects of homelessness.

“It’s weird that local government says they aren’t involved in these things, because they already are,” Fruhwirth says. “This police response is a response to unmet health-care needs in our community.” He adds that it is hard for the city’s progressive voters to fathom the degree of police enforcement, especially when “people like Ralph Becker are the face of it all.

“We are spending taxpayer money to address public-health needs with armed guards,” Fruhwirth says. “We’re already spending this money—what we need to talk about is how we choose to spend it.”

Gimme Shelter
“Jeff” is a 26-year-old alcoholic who originally landed in Utah after being cycled through jails and shelters in Alamo, Nev, and Reno, Nev. Jeff [not his real name] says he stayed briefly with his mother and her boyfriend until his drinking wore on their nerves. His mother’s boyfriend pulled him out of his bed while he was drunk and took him to the hospital. Jeff’s recollections of the visit are mostly a blur, except of waking up at the hospital with an IV in his arm. He promptly pulled it out and, with blood trailing, made for the exit, when a police officer quickly arrested him for public intoxication, at a hospital, in the middle of the night. 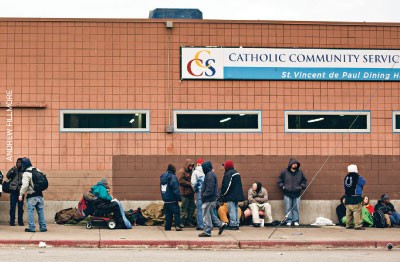 “Yeah, they laughed when I told ’em that in jail, too,” Jeff says with a wry grin. I met Jeff the first day he got out of jail in December. With a cherubic smile, thin goatee and dark sunglasses, Jeff has something of a resemblance to the actor Zach Galifianakis. When we first met, he could laugh at his new street-side status. A month later, when I would meet him again, his health, hope and optimism was ragged and ground flatter than a stomped-down cigarette butt.

“I couldn’t understand why people would sleep out on the street when I first got here,” Jeff says. “Then I found out the shelter smells like ass.” 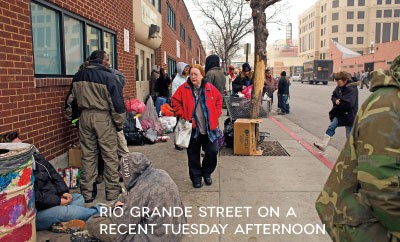 The Road Home Shelter at 210 S. Rio Grande St. provides shelter to hundreds of individuals and families every day of the year and also opens an emergency overflow shelter, with a 300-bed capacity, during the winter months. It is refuge from the elements and an essential life-saver but, unsurprisingly, it’s not an easy night’s sleep. I took an opportunity in early December to spend the night before the winter cold took hold. 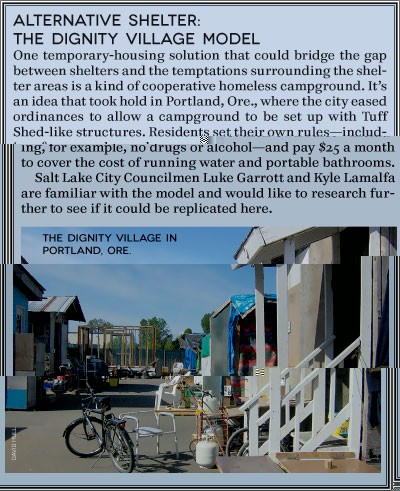 The inside of the shelter was essentially a barrack filled with gray bunk beds, each furnished with a thin, plastic-encased mattress. A small lounge area includes a TV and snack vending machines. There are bathrooms and showers; as a safety precaution, though, the bathrooms have no doors on the stalls.

It was possibly the worst night of sleep of my life. As a result of having 200-plus men in an open area, there is not a moment in the night not punctuated by a cough, sneeze, fart or sudden outburst of profanity. In the middle of the night, one elderly man was 20 feet shy of a garbage can when he sprayed vomit next to my bunk. A staffer helped the man out and cleaned up the mess. At 5:30 a.m., the lights came on, and it was time to leave and face the day.