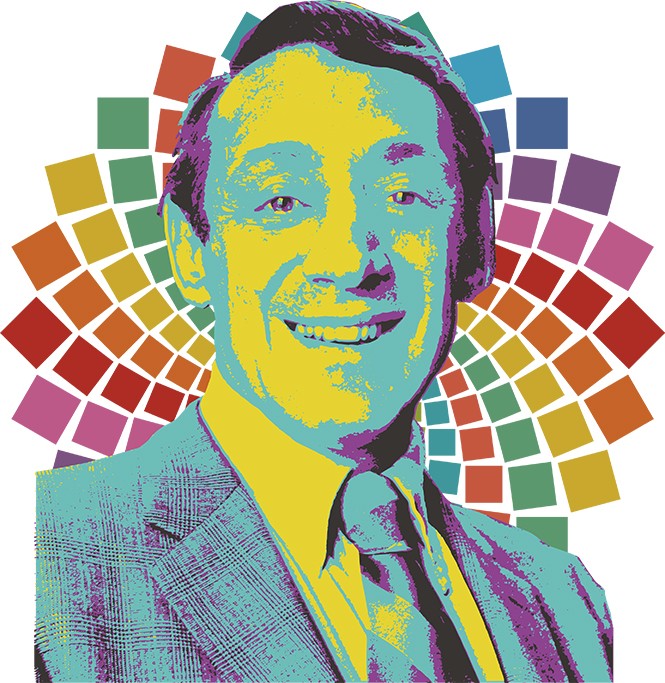 Salt Lake City's 9th and 9th district was filled with people last Saturday, who joined together below rainbow-hued banners and balloons waving atop street signs to celebrate the dedication of the newly named Harvey Milk Boulevard.

Following Penfold, Mayor Jackie Biskupski marveled at the size of the celebration's crowd and emphasized her belief in the pertinence of Milk's local legacy.

"Every time people walk down this street it will give them hope that we will be equal one day," Biskupski said. "The street name doesn't simply celebrate a person but celebrates a movement toward equality."

Biskupski closed her dedication by pointing to the need for activism to further the cause of equality for all people across Utah.

He then looked out across the 9th and 9th crowd—as if bidding them to become the participants he described—and asked, "Which one are you?"

Senator Jim Dabakis, D-Salt Lake City, also called for activism in an emotionally charged plea at the latter portion of the dedication.

"Will you protect the children of Utah?" he asked. "Will you be there? I beg you, get involved."

It is within the thread of activism that the spirit of the dedication found unity. In addition to Penfold, Biskupski, Crawford and Dabakis—each diverse individuals in their own right—the dedication featured words from Troy Williams and Lucas Fowler of Equality Utah, Salt Lake City's NAACP Chapter President Jeanetta Williams and Archie Archuleta of the Board of the Utah Coalition of La Raza. Despite their evident differences in cause, the speakers were united in the advancement of equality through activism.

Specifically, Jeanetta Williams carried a unifying tone in her message, drawing similarities between struggles both the African American and LGBTQ communities have faced. Williams addressed the issues surrounding transgender individuals' bathroom use, stating it was reminiscent of the segregation African Americans were subject to under Jim Crow law.

"We won our separate bathroom fight," Williams said. "We will win this one as well."

The "separate bathroom fight" Williams mentioned was interwoven among the lauding and celebration of Harvey Milk's legacy in many of the dedication speeches—likely, marking the next step for the LGBTQ community in their fight toward equality.

"As long as Gov. Herbert wants to check our kids' genitals at the bathroom door, we are not done," Fowler said.

Saturday's dedication—as much as it was a celebration—was a call to action embedded in the namesake of 900 South.

"I think it's the same as it has been for generations. It's about acknowledging we are all welcome here, we all matter and that it is unfortunate people had to lose their lives to get that point across," Biskupski said. "But we need to celebrate those people, their spirit and their foresight in saying, 'we've got to stand up for ourselves.'"

The path to naming the stretch of road after the slain City of San Francisco supervisor was a rocky one. The Salt Lake City Council voted unanimously on April 19 for the name change, but while support was widespread, some present at the meeting expressed concern because they felt 900 South was "already well recognized," and the name change had the potential to detract from that.

One community member, David Wirthlin, believed the city should have considered naming the street after someone with definite ties to Salt Lake City. Further, some expressed concern over the community's knowledge of Milk in general and said Milk, and his legacy within the LGBTQ community, didn't "speak" to them.

Despite opposition, the name change stood and was championed by crowds of supporters Saturday.

Williams heralds Milk as a uniter, noting his ability to create a collective movement. Milk's legacy as an inclusive revolutionary—now enshrined on street signs along 900 South—has the potential, he says, to affect the lives of many LGBTQ youth and the larger community.

"Harvey is an icon to the LGBTQ community. He taught us to come out of the closets and into the streets," Williams tells City Weekly in an email. "We know that Harvey Milk Boulevard on a prominent downtown street will be a beacon of hope to LGBTQ youth, as well as any marginalized teen. Over time, we hope Harvey will become a hero to all Utahns."