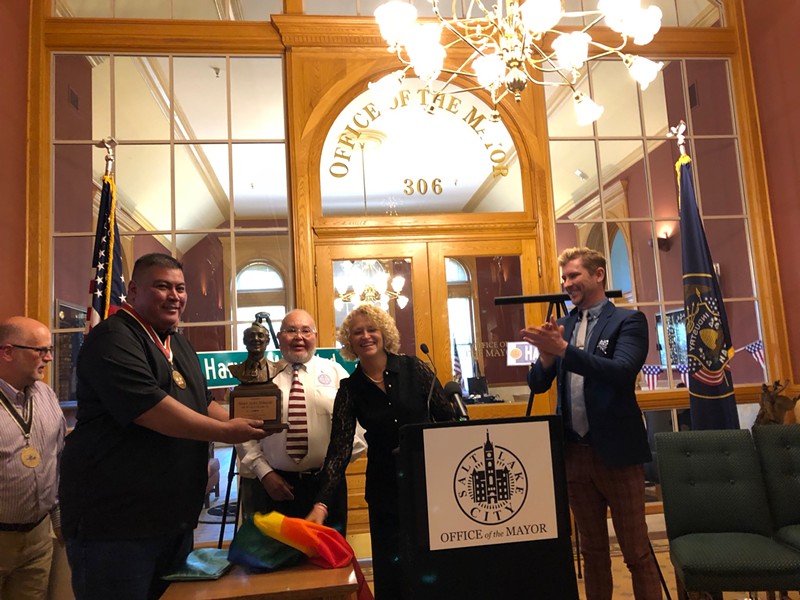 Pictures were taken, gifts were exchanged and honors were bestowed at the City and County Building on Friday afternoon, when Salt Lake City Mayor Jackie Biskupski and Equality Utah were given the Harvey Milk Civil Rights Award.


“To be awarded the oldest LGBTQ civil rights award in the nation is incredibly humbling,” Biskupski told the crowd.


Nicole Murray-Ramirez, director of the Imperial Court Council Canada-United States-Mexico and a San Diego Human Rights Commissioner, presented the award to Biskupski and Equality Utah Director Troy Williams for their promotion of equality and in recognition of Salt Lake City being the second city in the U.S.—behind San Diego—to honor Harvey Milk, the late LGBTQ rights activist and politician, with a street naming.


“When we set out with the crazy idea, Salt Lake City, capital of Utah, having 20 blocks renamed as ‘Harvey Milk Boulevard,’ we thought it was a wild idea, but we knew that Harvey had to take his place among the other icons of this nation: Cesar Chavez, Martin Luther King and Rosa Parks,” Williams said, noting that he thinks, “Harvey would be so thrilled to see a lesbian mayor, three out City Council Members, out of seven, an out, gay City Council member in Ogden, and in Midvale…We are queer-ing up this state.”


Despite the progress, Williams continued in his speech, Milk would probably be dismayed to hear of the state’s soaring youth suicide rate. “He would call us back to work. He would say, ‘Get out of the bars and get into the streets, and get to work, ‘cause it’s not over yet,’” Williams said.


Murray-Ramirez presented the city with a bust of Milk’s grinning mug, giving Harvey a home in City Hall.


“As soon as I saw the bust, I started crying,” Biskupski, the city’s first openly gay mayor, said after the ceremony. “I know I wouldn’t be standing here if Harvey Milk hadn’t done what he did and opened that doorway.”