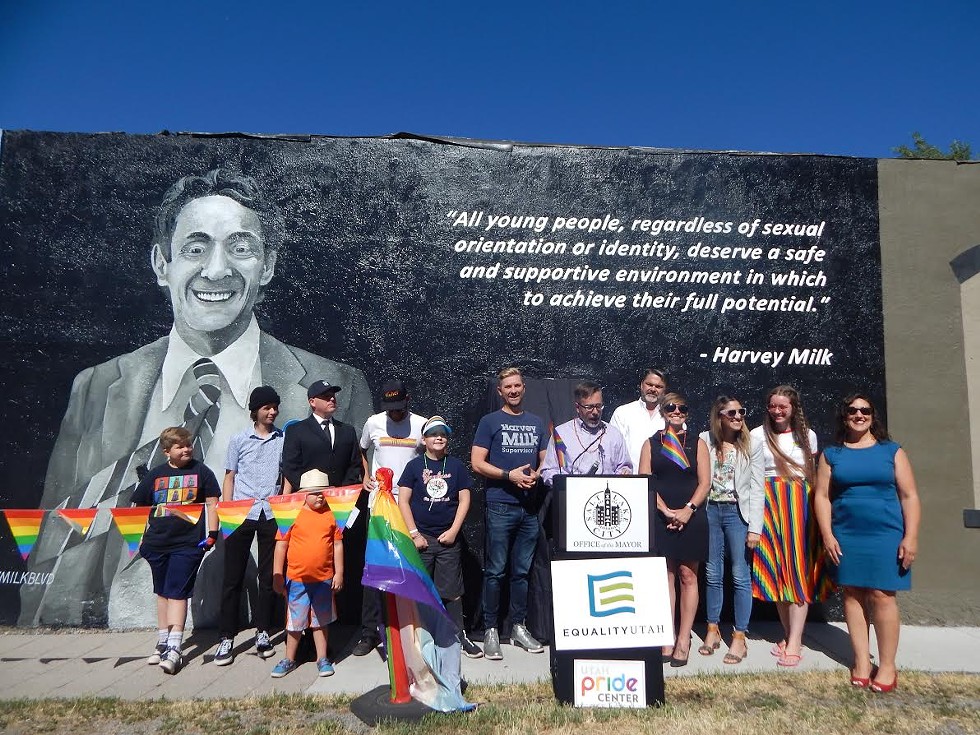 Standing at a podium under the hot morning sun on Harvey Milk Boulevard in Central 9th, Equality Utah’s Troy Williams listed off the names of openly LGBTQ officials elected to office across the state.


“Everyone asks, ‘What’s next after marriage equality, once you get all the civil rights?’ We stand up and we serve the public. We serve our community!” Williams added.


Williams stood alongside representatives from the mayor’s office and the Utah Pride Center as well as Councilwoman Fowler to celebrate the unveiling of a new mural of Milk, a former San Francisco supervisor and gay rights movement pioneer.


Local artist Josh Scheuerman, a former City Weekly employee, painted the mural on the eastern wall of A La Mode, a boutique that runs along the street the City Council voted to rename in Milk’s honor in 2016. He and the owners of the building, J.R. and Todd Holbrook, also joined in the ribbon-cutting ceremony Tuesday—held in front of TV news cameras and a cheering audience a couple dozen people strong.


“We thought it was appropriate and a beautiful thing to do. Everything just kind of came together at the right time, with Stonewall 50 and with Pride 2019 and Pride Month and finding Josh Scheuerman,” J.R. Holbrook said at the podium. “We were able to go back and forth on the images and pick just the right quote.”


The mural is a black-and-white portrait of Milk, bearing his trademark effervescent smile, with a quote from one of his best-known statements: “All young people, regardless of sexual orientation or identity, deserve a safe and supportive environment in which to achieve their full potential.”


Milk, who was assassinated by a political rival in 1978, was beloved for his uncompromising advocacy of gay rights and his trailblazing efforts to make the LGBTQ community in San Francisco a cultural and political force.


A fixure of San Francisco’s Castro District, Milk won a seat to the San Francisco Board of Supervisors in 1977 after running a political campaign out of his camera shop. As the first openly gay politican to be elected to public office in California history, he sponsored legislation to ban discrimination in public housing and employment. He also took on conservative Orange County, Calif., lawmaker Sen. John Briggs in a televised debate that helped turn public opinion against Briggs’ legislative efforts to ban gays and lesbians from working in California public schools.


“Harvey created a community. He created a haven for a group of people who thought that they did not have a place in this world. He created a home in the Castro centered around love and compassion and kindness,” Amanda Widner, valedictorian for the graduating class of 2019 at Weber High School, said in a speech during the mural’s dedication.


“Harvey Milk—along with a lot of people that came before me—are inspirations,” Councilwoman Fowler told City Weekly following the unveiling. “They made it a little easier for us, the LGBTQ community, to do what we want to be doing—to be city officials, to be elected officials, to fight and go and be and do whatever it is that you want to go and be and do. They’ve kind of paved the road.”


Milk had been serving as a supervisor for just under 11 months when he and San Francisco Mayor George Moscone were killed in City Hall by Dan White, a former colleague, in November 1978. Milk’s legacy lives on through a best-selling biography, an Oscar-winning documentary, a critically-acclaimed biopic starring Sean Penn, a transit plaza named for Milk in San Francisco and streets named after him in San Diego, Portland and Salt Lake City.


“We now have this beacon of light for the community and for the world,” J.R. Holbrook told the crowd. “Locals and tourists can stop by and gather strength. They can pay respects, take a photo—and of course hashtag #HarveyMilkBoulevard.”