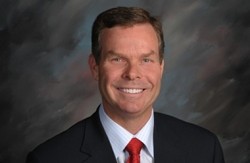 Was John Swallow using his powerful position to unlawfully reap cash and luxurious getaways? Or, was he a guileless, if jittery, officeholder—one targeted by well-armed political enemies?


These are the two versions of Swallow, the former Utah attorney general, that were painted by prosecutors and the defense during opening arguments Wednesday. A 12-panel jury will have to decide which is borne out by the evidence. Swallow faces 13 corruption charges in district court, where trial is expected to last two weeks.


Collins structured the state’s theory around three umbrella episodes, but she’ll have her work cut out for her in making sure jurors keep the players straight and follow her map through the tortuous allegations.


To open, Collins named or presented the names of about 40 individuals. She mentioned a spate of instances where money swapped hands, and connected those involved to half a dozen businesses. And at times the prosecution’s case was more squarely focused on Shurtleff, who is not on trial.


Actually, Shurtleff was initially charged with several felonies but all were dropped. And Lawson died last year. That leaves Swallow connected to the alleged crimes, a man who prosecutors believe was deeply involved.


“You have this power, greed, corruption triangle here,” Collins said on. “That’s the basis of the story here.”


For the defense, attorney Scott Williams argued that the accusations stem from opponents who wished to sink Swallow’s career. “This case starts with politics, and I think you’ll see, continues to be politics,” he said.


Williams played to the juror’s potential soft spot for Swallow as a husband and father. Reminding them that the former AG wasn’t merely a politician, Williams displayed a portrait during opening arguments of Swallow and his beaming family.


As for the claims about bribery, extortion and evidence tampering, the defense says they don’t pass muster.


Not only was it legal for Swallow to accept a swanky vacation in 2009, Williams argued, but few reasonable people would have turned it down. Williams reminded jurors that Swallow wasn’t an attorney general for a considerable span of time when the alleged pay-to-play crimes occurred.


This point will surely be a lynchpin to the case as the trial progresses. The prosecution will try to point to instances where Swallow allegedly boasted that he was going to be the next AG, and allegedly used it to his advantage.


Hedging against some of the evidence, the defense implied it will try to impeach the testimony of some key witnesses, including that offered by convicted businessman Marc Sessions Jenson.


“You wouldn’t make a decision about which brand of toothpaste to buy based on what this man says,” Williams says of Jenson’s credibility.


Jenson, who found himself deep in legal trouble around 2005, was the state’s first witness.


At a fateful Jazz game more than a decade ago, Jenson watched basketball and talked about the case looming over his head with a longtime pal, who counseled Jenson to reach out to then-Attorney General Shurtleff’s problem-solver, Lawson.


Jenson says he hoped to get a sit down at the AG’s office, so his gaggle of attorneys and those who filed charges could find an agreeable solution. Jenson maintains that he was not guilty of those 2005 crimes, and if he had the opportunity to explain himself, his problems might be resolved.


Lawson paid a visit to Jenson’s office, Jenson claims, requesting money that would go to fixing Jenson’s legal problems. Lawson also allegedly said all communications to the AG should go through Lawson. At first skeptical, Jenson eventually believed Lawson was bidding Shurtleff’s work after reading a string of late night text messages between the two men that contained “locker room” talk, as well as talking to a man on Lawson’s cell phone who sounded like the AG.


This was the beginning of a financial bloodletting that never stopped, Jenson says.


Lawson popped into his office frequently and walked out with payments ranging from $2,000 to $10,000 every two to four weeks. One day, Shurtleff allegedly told Jenson that Swallow would soon occupy the AG’s office, but the pay wasn’t lucrative enough. He asked that Jenson—who had surrounded himself with lawyers—hire Swallow as another attorney.


“I’m in an impossible situation, here,” Jenson said. “This guy [Swallow] is layered in by Mark Shurtleff, who has got a noose around my neck. I’ve got Lawson who’s calling almost daily, and if I don’t take Lawson’s call he’s haranguing my guys. And then John Swallow who shows up … I’m just stretched so thin, I can’t keep paying these people.”


Eventually, the AG’s office drafted a deal that Jenson found agreeable: he could plea in abeyance, and if he stayed out of trouble for three years, the charges would vanish. But the judge wouldn’t sign off on the deal because it didn’t compel Jenson to pay $4.1 million he owed in restitution.


Shurtleff allegedly convinced Jenson to go forward with a new deal that included restitution, but promised Jenson he needn’t worry because the AG’s office was the final authority on the agreement.


The day that the agreement was signed, Jenson met with Shurtleff at Red Rock Brewery for dinner. Jenson told Shurtleff he was traumatized by the entire ordeal and needed to leave town, move back to California. Retelling this story on the stand, Jenson momentarily went silent, then wiped tears from his face. He apologized then continued: Shurtleff supposedly told Jenson he wanted to meet Jenson’s business associates.


In Southern California, Jenson and his family settled into a private, gated resort called Pelican Hills. It didn’t take long before Shurtleff, Swallow and Lawson showed up for an expensive vacation and left Jenson to pick up the tab.


During their first stay, which Jenson says was uninvited, his guests racked up gargantuan bills on dinner, massages and golf. Jenson verified numerous receipts in court, including one for a room service delivery of a 12-pack of Diet Coke that totaled about $83.


Though not the largest bill, this one Jenson pointed out was an egregious example of the men’s prodigal habits. A 12-pack of the same beverage could have been purchased for less than $5 at a nearby grocery store. Better yet, Jenson suggested, he had several cases of soda at his villa that he would have given to the trio for free.


In the evenings at Pelican Hills, Jenson, Shurtleff and Swallow would convene and talk about the conditions of restitution, according to Jenson. On one such meeting, Shurtleff asked Swallow to give the other two men some privacy. Shurtleff and Jenson then walked through the dark to Jenson’s home. Confiding in Jenson, Shurtleff told him that he was strapped for cash and asked if Jenson could help out.


Shurtleff asked if Jenson was interested in paying a $250,000 advance for his soon-to-be published book, I am Not a Man: The Dred Scott Story. Not overly concerned about Shurtleff’s money problems, and certainly not interested in acquiring half a million dollars worth of books, Jenson declined.


Trial continues with Jenson on the stand. The defense will attempt to unearth refutable claims Jenson has made in the past.