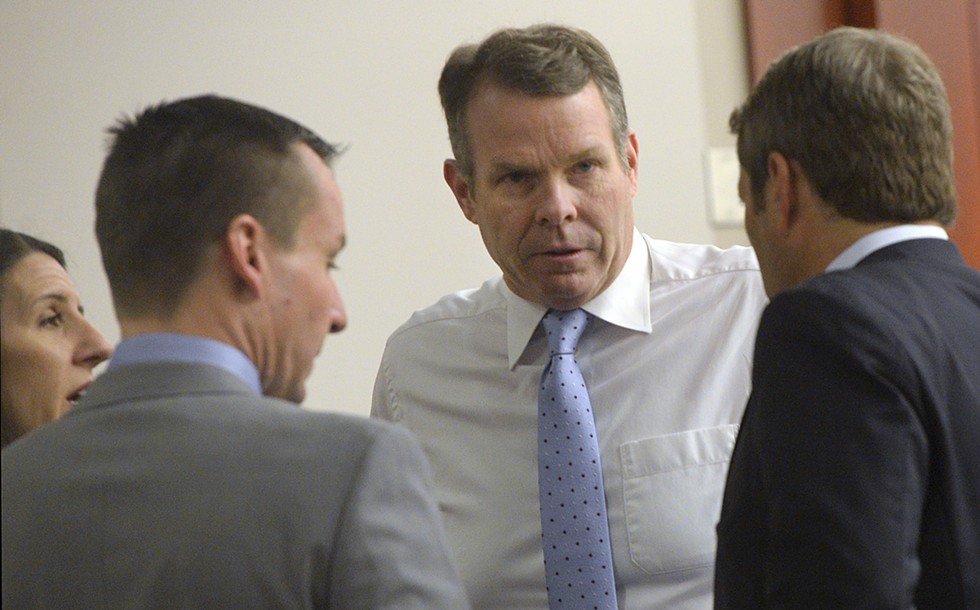 Nearly a year after a jury acquitted John Swallow on a slate of criminal charges, the former Utah attorney general filed a lawsuit Tuesday evening against the state seeking reimbursement for $1.58 million in legal bills and other costs from what had been perhaps the state’s most sensational public corruption case.

Hounded by news reports of scandals and federal and local investigations, Swallow resigned in late 2013 after only 11 months in office. But a state court jury last year found him innocent of charges stemming from the investigations that also ensnared Swallow’s predecessor, Mark Shurtleff, and Shurtleff’s friend and so-called fixer Tim Lawson.


Utah law says the state is on the hook for the cost of defending employees who are acquitted in criminal cases related to their positions.


But Swallow’s request that the state pay up was denied last year by the office of his successor as top cop, Sean Reyes, against whom Swallow fought a bitterly contested campaign in 2012 for the Republican Party nomination.


"Because I was erroneously prosecuted, I was forced to borrow money to defend myself,” Swallow said in a statement. "I spent the past nine months trying to work out a solution to get reimbursed so I can finish paying what I owe to my attorneys and others. Since the attorney general refuses to abide by the statute allowing this reimbursement, I am forced to file a lawsuit.”


If he wins, Swallow said Utah taxpayers might end up paying more than the original request since he will have incurred further legal bills.


Almost a year ago, a 3rd District Court jury found Swallow not guilty of nine charges and four others had been dropped during the trial. Charges against Shurtleff were dismissed and Lawson died before his trial was scheduled to begin. The sensational federal and local investigations of the state’s top law officers ended with a dull thud and no convictions.


In May 2017, Swallow’s lead trial attorney, Scott C. Williams, filed a claim with the Attorney General’s Office for $1.5 million for Williams’ fees and those of Cara Tangaro and Brad Anderson for representation of Swallow at trial, plus the bills from previous attorneys who had represented him and for fees for experts and other expenses.


The claim said that Swallow would be willing to accept $1.3 million if the AG’s office agreed, which it did not.


“This case is based on a statute designed to discourage prosecutorial abuses and to protect innocent public officers, like John Swallow,” Swallow's attorney, Rod Parker, says. “It’s a fairly straight-forward analysis: If the official is charged for acts while in office and wins an acquittal, which is what happened here, then the fees incurred are owed as a reimbursement.”


After Swallow resigned, Gov. Gary Herbert appointed Reyes to fill the post. Reyes is supposed to be recused from actions in his office related to Swallow.


Swallow was tried on charges of conspiracy, evidence tampering, misuse of public money and obstruction of justice. But a jury found him not guilty on all counts in a case prosecuted by the Salt Lake District Attorney’s Office.

“I was acquitted and the whole point of the statute is to protect state employees like me—innocent people—from being ruined financially by malicious prosecutions" –Former Attorney General John Swallow tweet this
The AG’s office said the state wasn’t obligated to pay Swallow’s bills because he was not in office at the time of the trial. (The office declines to comment on pending litigation.)


But Swallow points to a ruling last year in Shurtleff’s own lawsuit seeking to recoup $1.1 million in legal fees and costs. District Judge Bruce C. Lubeck ruled in September that Shurtleff wasn’t entitled to legal fees because his case was dismissed on the motion of the prosecutor, Davis County Attorney Troy Rawlings, but the judge also shot down the AG’s argument the law didn’t apply if the state employee was not in office.


Lubeck ruled that state law provides reimbursement to someone who was in office at the time of the events leading to charges.


“I was acquitted and the whole point of the statute is to protect state employees like me—innocent people—from being ruined financially by malicious prosecutions,” Swallow tells City Weekly via text. "But here we are a full year later and I am having to file a lawsuit.”


Shurtleff’s lawsuit remains pending on a claim that Reyes violated a contract that Shurtleff had with Rawlings—who was appointed as a special assistant AG to prosecute the case—that would have allowed the charges to be dismissed on Shurtleff’s own motion and, therefore, entitle him to the state’s payment of legal fees and costs.

Story will be updated as more details become available.