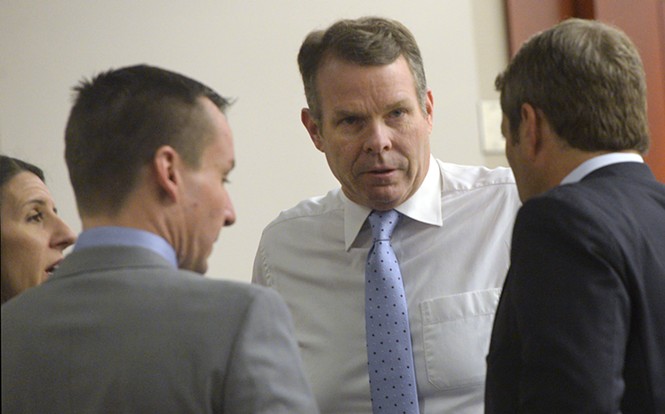 The most explosive accusation on Friday in the John Swallow case occurred outside the courtroom, where a defense attorney insinuated the state was coercing a key witness.


Scott Williams, lead defense counsel in the Swallow trial where he faces 13 corruption counts, implied at an ad hoc gathering of the press that the state was mistreating key witness Jeremy Johnson in an effort to influence his testimony, if he indeed testifies.


“I think Jeremy Johnson should be treated fairly. If he’s brought over here under circumstances that are less restrictive, less punitive and then that all changes because of things that are going on in the court system, that’s not fair,” he said. “Those are possibly attempts and probably attempts to influence his decisions and his testimony.”


Last year, Johnson was sentenced to more than a decade in prison for fraud-related charges. Currently serving time in a “lovely federal prison camp” in California, Johnson—a friend to Swallow and allegedly involved with him in an attempt to bribe former Sen. Harry Reid—was transported to Utah for the trial.


But Johnson says he is invoking his Fifth Amendment rights against self-incrimination and will not take federal agents at their word that they will not use his testimony to go after him further. For the third day in a row, Johnson was hauled out of the courtroom, shackled in chains, because he will not answer questions from the stand.


The court, in response to Johnson’s refusal to testify earlier this week, found the witness in contempt and sentenced to a month in jail. On Friday, however, Judge Elizabeth Hruby-Mills suspended Johnson’s jail sentence for three days.


In order to determine whether Johnson is being offered a deal or threatened with punishment, the defense team has asked for a detailed record of the government’s interactions with Johnson since returning to Utah.


“Frankly, our concern is that he is being mistreated because of his exercising of his rights, and if that’s true, we want to know about it,” Williams said. He declined to address whether the defense would seek a mistrial or other legal strategies going forward.


A few charges accuse Swallow of deceptively altering a campaign finance disclosure. While running for attorney general in 2012, Swallow’s team set up a number of campaign events, including a fundraiser hosted by Timothy Bell.


Campaign staffer Seth Crossley, who helped set up the event, testified on Friday that sometime during the event, Swallow realized Bell was the same Timothy Bell involved in a legal battle with a bank over a foreclosure.


Due to the appearance of impropriety, witnesses said, Swallow agreed to refund the cash. On his disclosure document, his staff also changed a $25,000 in-kind donation to $1,000. Later, after receipts were produced, it was changed again to more than $28,000.


An eloquent and composed former Swallow campaign staffer, corporate lobbyist Renae Cowley explained away the Bell disclosure as a mistake that was rectified as soon as it was discovered.


Cowley’s pleasant and sharp demeanor turned bitter when she was asked by the defense about working with investigators. Tearfully, she told jurors that after cooperating with investigators, she was served a search warrant—which contained “hurtful, salacious gossip”—at her apartment around May 2014. The warrants demanded access to her computer and phone—devices she says she opened up to the investigators upon request at earlier meetings.


“There were at least a dozen officers with guns searching my home that’s less than 500 square-feet,” she said, later adding, “They were cruel how they treated me that day, like a criminal.”