Thanks for the Memories, Orrin! | Buzz Blog

Thanks for the Memories, Orrin! Sen. Orrin Hatch did his best last year to pass a GOP tax bill and tinker with public lands in Utah, and along the way, he garnered The Salt Lake Tribune’s “Utahn of the Year” recognition. So what’s an 83-year-old senator to do now?


Just call it a day and bask in the ovation from his friends and colleagues, it seems.


When Hatch announced his plans Tuesday to retire at the end of his term, elected leaders throughout the state—Republicans and Democrats alike—recognized the four-decade incumbent for his service, as did President Donald Trump and members of his administration. Not all Republicans have eagerly praised the president, but Hatch has been one of Trump’s most effusive supporters. In turn, Trump has rewarded Hatch with laudatory tweets and by signing a proclamation cutting about 2 million acres from Bears Ears and Grand Staircase-Escalante national monuments.


Others newsmakers reflected on senior senator’s body of work. During his tenure, Hatch has been instrumental in the passage of numerous bills, indeed more than any other senator that includes monumental legislation like the American with Disabilities Act and the Children’s Health Insurance Program (CHIP).


Here are a few notable comments related to Hatch’s announcement.

“Congratulations to Senator Orrin Hatch on an absolutely incredible career. He has been a tremendous supporter, and I will never forget the (beyond kind) statements he has made about me as President. He is my friend and he will be greatly missed in the U.S. Senate!” 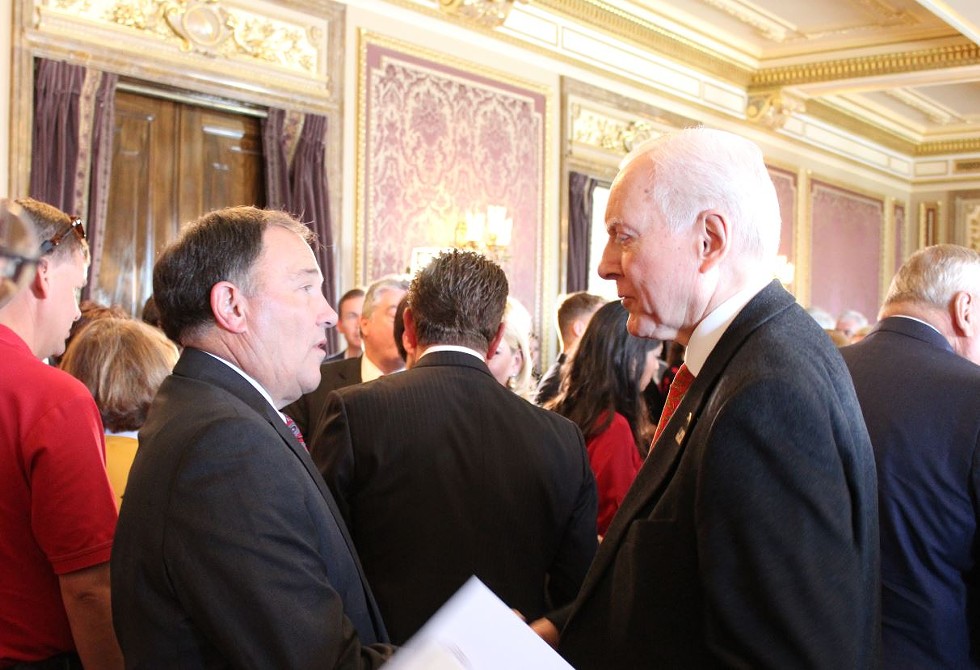 “Few have been as dedicated to serving the people of Utah as our good Senator, Orrin Hatch. For seven terms, he has represented the people of Utah with strength and dignity. We are grateful for his hard work and for his untiring effort on behalf of our state. I wish him the best.”

“Sen. Hatch has been a tremendous servant to the people of Utah and he will be sorely missed. It has truly been an honor serving with him in the United States Senate and I know he will continue to do fantastic work for Utahns.”

“@senorrinhatch has served with dignity and honor. He is a man of integrity. The seat will be filled after the upcoming election but he will never be replaced. Thank you for your service, your grit, your effectiveness and for your friendship. I have learned so much. #utpol”

“I would like to thank Senator Orrin Hatch, and his entire family, for a lifetime of public service on behalf of the people of Utah. Throughout my career, whether we agreed or not, Sen. Hatch has always been someone I could call when Salt Lake City needed help from Washington. I wish him and his family well as they embark on a new stage of life.”

“I am grateful that we have had such a statesman on the frontlines fighting for us for the past four decades. @senorrinhatch has been a great friend and mentor to me. We still have a lot left to accomplish together this year but I will certainly miss his presence in the Senate.”

“I offer my sincere gratitude to Senator Hatch for his decades of service fighting for Utah. We may never again see someone in the Senate who has such an outsized influence and yet been so accessible to Utahns. Thank you, Orrin, for your service.”

“Thank you @senorrinhatch for your decades of service in the United States Senate and for fighting every day for the American people. @POTUS & I will always be grateful for your leadership, counsel, and friendship.”

“We thank Senator Orrin Hatch for his years of service. For some time, Hatch was a senator of compromise, willing to make hard decisions. While he has strayed from that path over the past few years, we believe that service should be recognized.


We thank him for his role in uniting Utahns against the Trump administration. Whether it was his inaction on CHIP, his support of the destruction of our national monuments, or his troubling defense of Roy Moore, we thank him. Now more than ever, we know where he stands and the Utah Republican Party stands, and it is not with Utah.


We look forward to the 2018 elections. The Trump administration and outside agencies have a keen interest in this election. We believe that this Senate seat belongs to the people of Utah—not to Steve Bannon, Donald Trump, or their wealthy friends.


We look forward to seeing Governor Romney of Massachusetts on the campaign trail.”


2012 Republican presidential nominee Mitt Romney: “I join the people of Utah in thanking my friend, Senator Orrin Hatch for his more than forty years of service to our great state and nation. As Chairman of the Senate Finance and Judiciary Committees and as the longest-serving Republican Senator in U.S. history, Senator Hatch has represented the interests of Utah with distinction and honor. Ann and I wish Senator Orrin Hatch and his loving wife Elaine all the best in their future endeavors.”

“Thank you, Senator Orrin Hatch, for your decades of public service.”

“Thank you for your service to our state and country, Senator Hatch. In this seat, we must have a leader prepared to meet the challenges of our day and our future. I hope that leader will be @MittRomney.”