From Demonstrations to Dialogue | Buzz Blog

From Demonstrations to Dialogue 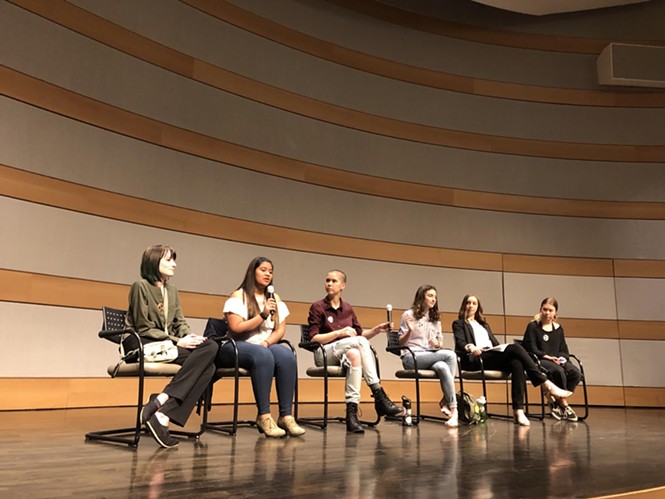 About a dozen people gathered Wednesday night in the Salt Lake City Main Library auditorium for a debate on gun reform between a panel of high school students and current and former Republican state representatives.


“The laws are currently failing us. We’re unsafe in school,” Gracie Shirley, a 17-year-old Highland High student, told the crowd after a question from Rep. Angela Romero, D-Salt Lake City.


“We really don’t want to associate with either party because there are extremes on both sides,” Riley Arnold, 15-year-old Skyline High student, said in response to a question from former Rep. Curt Oda, R-Clearfield.


Last Friday, each panelist walked out of their schools and joined a 300-strong student protest at the Utah Capitol because, in the words of Skyline High senior Zach Mallender, “I don’t want to see any of my peers get shot.” Utah’s youth have been busy: In March, 8,000 students, teachers and parents marched to the Capitol to demand a legislative fix to the country’s gun-violence problem.

“Blaming all this on mental illness and psychotropic drugs is just untrue." –High school student Ainsley Moench tweet this

Students at Wednesday’s panel took questions from their peers, members of the public, elected officials and local media, laying out the six actions for gun reform they want state lawmakers to address: instituting a mandatory waiting period for anyone who purchases a gun; creating a “Red Flag” law that would allow law enforcement to take guns away from people deemed a threat to themselves or others, raising the minimum age for purchasing a firearm to 21, banning the sale of so-called “assault weapons,” limiting high-capacity magazines, and imposing a universal background check for all gun sales in Utah.


Oda told the students they were “well coached” before asking them what their “real goal” is and noting that, “the bad guy doesn’t obey laws.” Rep. Karianne Lisonbee, R-Clearfield, Oda’s successor in District 14, warned that “real people who could be victims of crimes” could be hurt by a three-day waiting period between when they purchase and when they receive their firearms.


Clark Aposhian, chair of the Utah Shooting Sports Council, asked the students why someone who already owned guns would be subjected to a three-day waiting period, rejecting Shirley’s response that it would be for a federal background check purposes, since there is no federal firearm database. Aposhian did say he thought there might be common ground between the students and the guns-rights advocates on the “Red Flag” proposal, questioning whether they’d be open to legislation that included that provision but allowed the accused to first appear in court.


One audience member asked the students why they weren’t making mental-health legislation or dealing with school bullying a priority in their demands. “Blaming all this on mental illness and psychotropic drugs is just untrue,” Moench said, considering that the majority of people with mental illness do not go on to commit mass murder. “Mental health is a factor. It’s not the only factor.”


Regarding bullying, Jimenez said members of the panel had gotten death threats since they started speaking out. “We’ve been bullied, cyber-bullied, by adults,” she said.


After the panel, Oda said he, Aposhian and Lisonbee had attended the gathering together because, “it caught us by surprise” and they wanted to come to combat misinformation.


Knowlton said she appreciated that Wednesday night was a discussion, since the previous Utah student gatherings had been walkouts and demonstrations—situations not conducive to a dialogue. “We just need to keep on having the conversation,” she said. “We’re not going anywhere.”


“If we don’t talk to people on other sides, we’re not going to see the flaws in our own ideals,” Arnold said.


“We’re here to listen,” Romero said of legislators’ role as the students demanded action on gun reform. “I hate when people say the kids are the future. They’re the now,” she said. “Just because someone can’t vote doesn’t mean they can’t be a part of the political process.”

Correction: A previous version of this article incorrectly stated the proposed three-day waiting period as 30.