Two friends broaden Utahns' understanding of what it's like to be LGBTQ one podcast at a time. 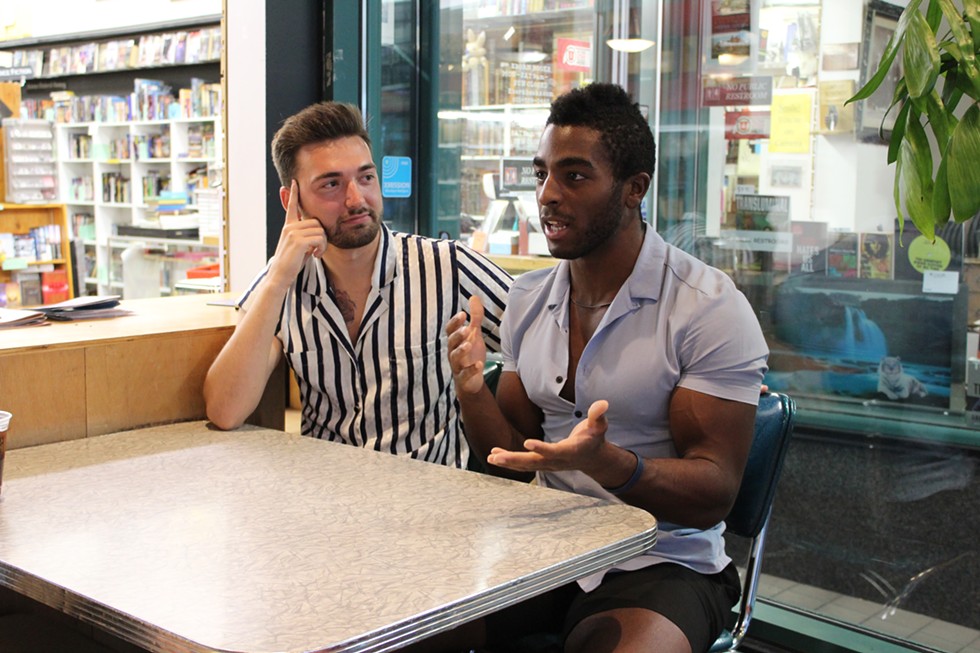 Searching for a way to feed their creative sides, Trent Morrison and Chris Glaittli decided in late 2017 they were going to launch a podcast. All they had to do was figure out its focus.

"Well, we're gay, we know a lot about gay shit," Morrison says, recalling the days before they launched Masc4Masc, a queer-themed show that, according to its website, provides "an additional, and much needed, queer voice in conservative Utah." The name comes from a commonly used term in the gay community about masculine people seeking masculine partners, which, the podcast's webpage says, "plays into a larger conversation about gay toxic masculinity and what it means to be a queer, gay, femme, etc. man."

Every Sunday night, the pair—"co-hoests," as they describe themselves—meet in Morrison's bedroom in their shared apartment in the 9th & 9th neighborhood, where they record and edit their conversations. They release each iteration the following Thursday and share it on social media. They don't make any money from the five or so hours a week each episode demands, but Morrison says as many as 4,000 people have downloaded Masc4Masc in a single month. Most of those listeners are in Salt Lake City, he adds, but they also have pockets of fans in the United Kingdom, Australia and Des Moines, Iowa.

"There's such a lack of queer voices in the podcasting world, and comedy, so many areas," Morrison says. "I do want to be examples and I want to show people how easy and casual a podcast can be. And, just taking up space is so important."

Masc4Masc dropped its first installment at the end of January. Since then, Morrison and Glaittli have finished their first season and are more than halfway through season 2, regaling listeners with the history of drag queens, the duo's thoughts on LGBTQ superheroes and the difference between daddies and zaddies. But it's not all fun and "gaymes," to borrow a word used frequently in their episode descriptions—conversations often veer toward heavier topics, like Morrison navigating a toxic relationship while still in the closet and Glaittli speaking out on social media about the intersectionality of being a gay, black, feminist man.

"Our focal point has always been to eliminate the stereotype and talk about things a little more openly when it comes to being a gay man in Utah," Glaittli says. "It's helping people get a real sense of, 'A day in the life.'"

Each of the 17 episodes (as of press time) typically follow the same format—with Morrison and Glaittli breaking down common misconceptions of LGBTQ people while also talking about things they love and hate. Through their infectious, large personalities, Morrison and Glaittli's playful-yet-serious talks underscore the strong friendship they've had since college and fulfill an important role for heteronormative Utahns.

"In Utah, and maybe the nation and the world, I think there is a bit of a disconnect when it comes to people who don't really know how to ask the right questions or have a conversation with people of the LGBTQ+ community," Glaittli says. "People want to ask questions ... We're doing the conversation before they can ask, so that it sparks that conversation for everyone else. That's the hope anyway, that it does ignite allyship."

Alongside titles like "Dating & Dealbreakers" and "Dick Pics & Politics" are episodes called "10+ Questions You Shouldn't Ask LGTBQ+ Folks" and "How to be an Ally." Morrison says future installments are being planned on sensitive topics like how to talk to a child who recently came out of the closet.

"You could either make your child's experience really open if they come out, or you can really affect them long term," Glaittli says, adding the show has brought him closer to his own family—his sisters have learned more about him through listening.

Both Glaittli and Morrison grew up in Mormon families, a personal history Morrison brings up when talking about his home life in Salem, Ore. "It provided a lot of trauma for me, and it provided a lot of shame," Morrison says of his time in The Church of Jesus Christ of Latter-day Saints, "and so, through the podcast and other resources like therapy and friends and a lot of support systems, I've been able to control that narrative a little bit more."

The LDS church has been slowly modernizing its stance toward members of the LGBTQ community in recent years, but historically it has stood against gay rights, as when leaders supported a same-sex marriage ban in California in 2008 or made apostates of married same-sex couples and barred their children from some religious privileges as a result of its so-called "November Policy" in 2015. Currently, the church teaches that identifying as LGBTQ is not a sin, but acting on those sexual impulses "get[s] in the way of our eternal progress."

"For me, it's really important to be candid and open and honest, and vulnerable about our past—the good, the bad, the ugly. We want to be really transparent and open and real," Morrison says.

Glaittli came out to his family when he was 19 instead of going on a mission. "I know I came out super lucky," he says, because his parents took the news relatively well—he's acquainted with a lot of queer-identifying Mormons who were shamed by the church or kicked out of their families after coming out. He hopes that listeners who are struggling with telling their families they're gay or who were traumatized by the church understand that "being gay doesn't have to be this huge, insane burden or secret."

Glaittli and Morrison aren't the only voices on the show—Masc4Masc has also featured interviews with a handful of guests who have helped facilitate the hosts' goal of creating relationships through vulnerability and honesty.

"The most important thing that we, as queer folks and other marginalized people can do to bring about some authentic, radical transformation in our society is to share our stories," Connell O'Donovan, a recent Masc4Masc guest and organizer of Salt Lake City's first Gay and Lesbian Pride march in 1990, says. "When you are doing that with people who have opposed you, people who have disenfranchised you and marginalized you, if they can hear you and hear your story, that changes them. They cannot go to sleep that night and say, 'I've never met an openly gay person.'"