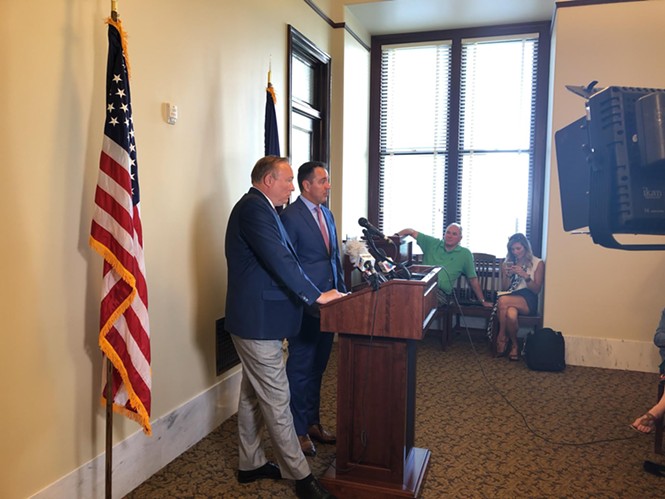 In one of 2018’s more unlikely mashups, Democratic State Sen. Jim Dabakis and outgoing House Speaker Greg Hughes, a Republican, are lending their collective voice to the inland port debate.


“To the citizens of Salt Lake, to the people of Salt Lake County, to the other people that are interested, now is the time. This is Hughes and Dabakis. This is a beginning, it’s not an end,” Dabakis told a crowd of reporters and concerned citizens Tuesday morning at the Capitol. Sounding at times like he and Hughes were dropping a hot new mixtape, Dabakis announced a “compromise framework” for Senate Bill 234 and the future inland port in Salt Lake County’s Northwest Quadrant.


“[As with] any good public policy, you have to find common ground; you have to find overlap,” Hughes said. Shortly before Dabakis read what Hughes called the senator’s “list of demands,” the speaker acknowledged he does not think all points make the inland port a stronger project, but “finding common ground with Salt Lake City, or its public servants” will. “If we can do this, we think this can happen more broadly, and we can get this thing working the way it needs to work,” he added.


Dabakis’ list included, among other suggestions, the use of equipment or technologies that meet or exceed federal environmental standards; outlines tax dollars to be used in “measurable ways”; removes the north side’s wetlands from the authority’s boundaries; and allows for the city and other governmental units to deal with land disputes for six months, after which the authority goes to the board. “Greg and the state government are the 500-pound gorilla, and they decide. So, if we can make the state law more amenable toward what may come anyway, that’s a big step forward,” Dabakis cautioned, encouraging representatives to “continue the discussion.”

“Nothing that we have said is memorialized, or etched in stone. We’re showing that agreement can occur.” –Greg Hughes tweet this

Advocates for the port see a huge opportunity for economic development. Detractors and citizens see state overreach and fear the potential negative environmental impact that such a project could have on a region already suffering over air quality concerns.


“Nothing that we have said is memorialized, or etched in stone. We’re showing that agreement can occur,” Hughes said.


Following the presser, several House and Senate Democrats released statements that were critical of the “hidden and vague negotiations over the inland port.”


“We were blindsided by this. It is my constituents who will be directly impacted by the inland port, but they didn’t include us in any of these conversations. The overall impact this will have on the surrounding neighborhoods, the traffic, the air quality and our quality of life regionally will be significant. We agree that an inland port is an important opportunity for our state. But sadly, this distracts from a healthy and robust public process,” Rep. Sandra Hollins, D-Salt Lake City, said in a statement.


Rep. Angela Romero, D-Salt Lake City, questioned why only Hughes and Dabakis were present. “The elected leaders representing the Northwest Quadrant have been repeatedly shut out of the process. The process has not been transparent. We appreciate that they are willing to come together and work on this. But why a press conference for show? Why not work with their colleagues and with the City? Part of compromise is bringing more than two people together,” Romero said.


Sen. Luz Escamilla, D-Salt Lake City, cautioned that, “this is a serious discussion that will impact our future. We are moving forward, and we will fix this. But that will only happen if we’re inclusive and talking to each other.”


Dabakis said during the press conference that the compromise framework is “not policy. This is our idea, and let it be in the marketplace of ideas, as we go.”


Rumors abound that Hughes and Dabakis, both on their way out of their offices, will in the coming years run for governor and mayor, respectively. Acknowledging that he appointed himself to the Inland Port Authority Board, Hughes said he has “no benefit whatsoever from being on this board,” and assured that his role in this process “isn’t tethered to anything.” Dabakis, meanwhile, said, “If I were to run for mayor, I would run away from this issue, believe me. I want the city involved.”


“There’s gonna be a port,” Dabakis said at one point. “The question is, what kind of a port, and what kind of protections are there going to be, and are the people of Salt Lake City going to get a good deal out of it?”