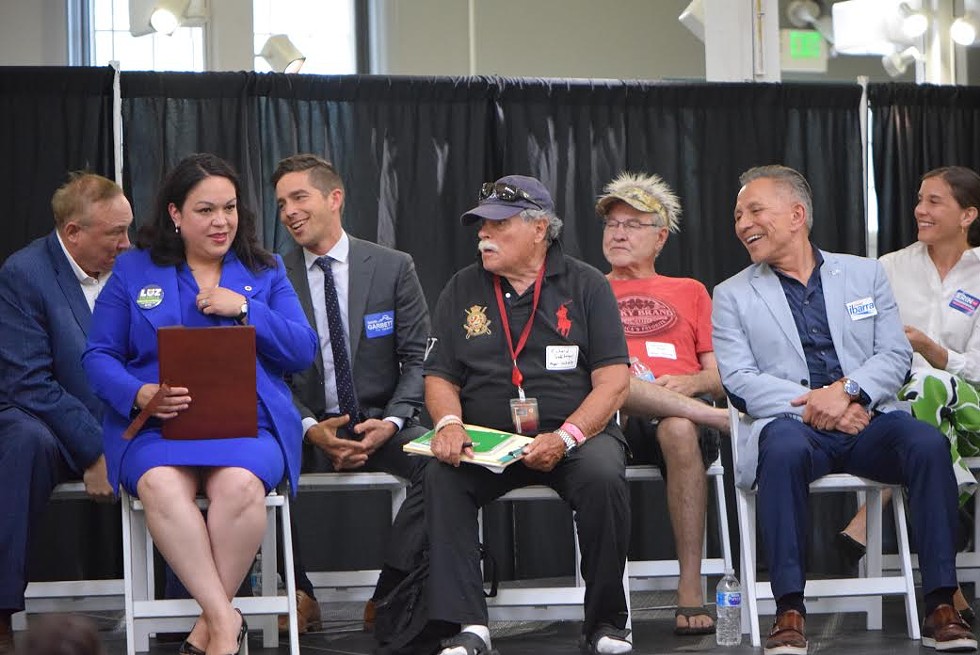 The deadline to sign up for the Salt Lake City mayoral race closed last week, and on Thursday night, all eight hopefuls showed up for a forum at Utah State Fairpark devoted to issues affecting the city’s westside.


Candidates emphasized the need for better air quality, improved public transit infrastructure, homeless resources and efforts to bring in amenities like coffee shops and restaurants to an area that’s home to a diverse population but that has long struggled with lack of development and neglect.

Related Promises, Promises: As this summer's campaign season heats up, mayoral candidates vie to stand out.

Promises, Promises
As this summer's campaign season heats up, mayoral candidates vie to stand out.
Between June 13's Westside Issues Forum and the primary debate on June 26, residents should have ample opportunity to hear from the candidates and ask them questions regarding the capital city's future.
By Ray Howze
News

“Let me be clear—the city has failed the westside,” said Sen. Luz Escamilla, D-Salt Lake, who has lived in the area for 18 years and represents the westside in the Legislature. “And not only the city, but the state has done that, too.”


Not surprisingly, the inland port was a major topic. The state-backed project is slated to be built in the city’s Northwest Quadrant and is expected to have a major impact on the westside. When moderator Billy Palmer, co-host of KRCL’s “RadioActive”—which was broadcasting the forum live—asked if the candidates would continue to pursue Mayor Jackie Biskupski’s lawsuit over the inland port, six said they would.


“It breaks my heart to see how the state swooped in and removed the city’s authority to determine what happens out there,” former city councilman Stan Penfold said. “Yes, the lawsuit should go forward, because I think we need the clarity. I’m convinced the state overstepped its bounds legally.”


Penfold and several other candidates also voiced support for negotiating directly with the state, taking subtle digs at Mayor Biskupski’s decision to pull out of port negotiations last year.


“I think it’s the job of our mayor to show up to whatever the discussion is, whether or not they like the setting of the table,” Erin Mendenhall, District 5 councilwoman, said. “If we’re not at that table, then we are on that menu.”


Candidates Rainer Huck and Richard Goldberger both said they don’t oppose the lawsuit. Huck, a retired engineer who called himself a “freelance philosopher” and the “un-Rocky” (in reference to then-Mayor Rocky Anderson) when he ran for the seat back in 2007, said he would drop the litigation on his first day as part of a platform promoting smaller government.


The forum was hosted by nonprofit activist group the Westside Coalition in partnership with the local chapters of the League of Women Voters and the League of United Latin American Citizens. The candidates were given three questions, and audience members voted for their favorite responses with results showing instantaneously on a video screen.


Jim Dabakis, a former state senator and popular radio and social media personality, delivered rousing responses to the questions, telling anecdotes and saying a good mayor “speaks from his heart.” Businessman David Ibarra emphasized how he was educated in the “school of hard knocks,” growing up in foster care and building a successful career after getting his start as a dishwasher in a restaurant. He called for any development on the westside to be on par with chic areas like 9th & 9th and Central Ninth.


David Garbett, former executive director of the Pioneer Park Coalition, touted the importance of “moral courage” and a dedication to big-picture issues like immigration. Richard Goldberger, a self-described “common-sense-crat,” pledged to take on neighborhood gangs and proposed a range of whimsical projects, including a contest where citizens get paid 10 cents for every cigarette butt they pick up off the street.


Sen. Escamilla had arguably the most sobering take on issues affecting the westside. She demanded policy driven by research and data, and better public transportation options for communities struggling to get out of the poverty cycle. Like other candidates, she also emphasized the need to work with the state and build up transparency for the political process as the city—and the westside—tackle their most pressing issues.


“I developed asthma. My three-year-old has asthma, and my dad passed away of a respiratory complication less than a year ago because of air,” Escamilla said, choking up as she discussed her legislative efforts to monitor air and water quality. “This matters, and the westside has been ignored, and no one has represented them.”