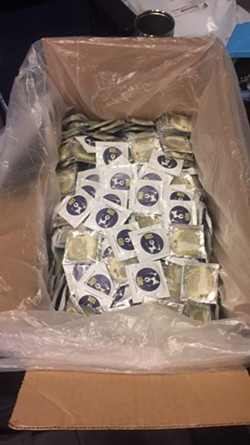 It’s election season in Salt Lake City and residents are being bombarded by campaign stickers, buttons, flyers, T-shirts and other ephemera touting the eight candidates vying for mayor.


But one candidate has added a unique item to his arsenal of campaign-branded merchandise: condoms.


Ex-City Councilman Stan Penfold is distributing free condoms with his dog’s face—the campaign’s mascot—imprinted on the front of the small, square packages.


Penfold says the idea came about when he and some interns were brainstorming ways to make the campaign’s Pride parade entry more interesting.


“That face is my dog Ollie ... we’ve used his face in a couple of things for our campaign,” Penfold tells City Weekly. “We handed the condoms out along the parade, we handed them out during Pride weekend and they were such a big hit and we decided that we should continue this.”


Penfold rescued Ollie, a 15-year-old Border Collie mix, when the dog was one. Ollie often accompanies Penfold to work and, over time, the two became inseparable in many people's minds.


Penfold says the condoms help normalize conversations about sex and contraceptives—an important goal when he served as the executive director of the Utah AIDS Foundation, a position he left this spring to run for mayor.


Teenage education about contraception has been a hot-button issue among lawmakers, many of whom argue that abstinence-only is the best way to prevent unwanted pregnancies. Penfold disagrees, saying that he finds it hypocritical that groups opposing reproductive health care services or sex education are also pushing to ban abortions.


Although his stockpile is starting to run low due to high popularity, Penfold said he will continue giving out the condoms at campaign events.


“Every once and a while, people will think they’re candy or mints or something like that,” Penfold says with a chuckle. “They’re just kind of different and quirky enough that people sort of see them and think they’re funny and they take them.”