As this summer's campaign season heats up, mayoral candidates vie to stand out. 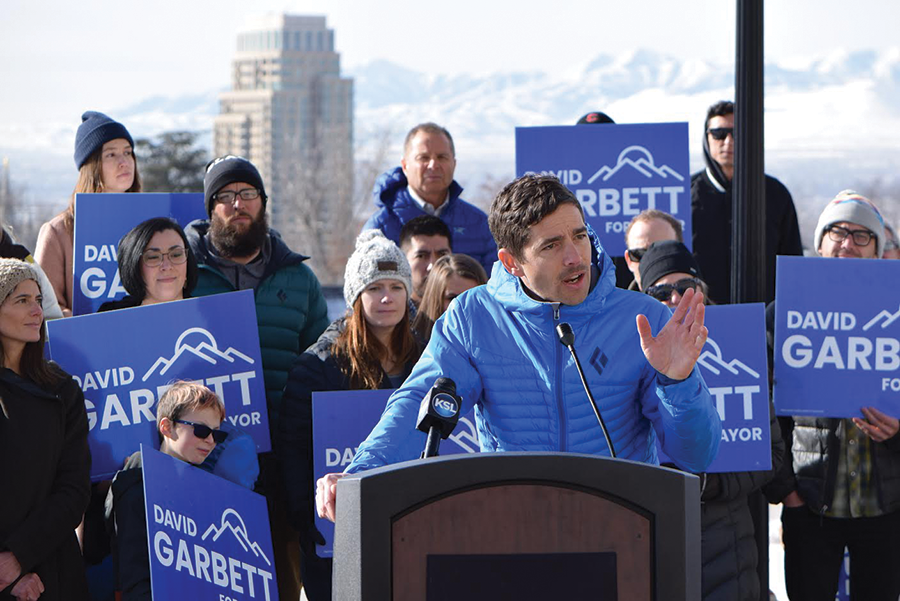 Salt Lake City's next mayor will be ... well, it's much too early to say who will fill outgoing Mayor Jackie Biskupski's shoes, but the smorgasbord of primary candidates has been doing their damndest to get noticed right out of the gate. From a proposed ban on conversion therapy to grandstanding ambitious renewable energy goals, it's fair to say the campaign has kicked into high gear. Between June 13's Westside Issues Forum and the primary debate on June 26, residents should have ample opportunity to hear from the candidates and ask them questions regarding the capital city's future.

Mayoral March Madness
Get ready to rumble—the primary is fast approaching.
Assuming we survive the lunacy, we’ll be there to cover the race between the top two vote-getters, culminating in the November municipal election. But first, the primary.
By Kelan Lyons and Ray Howze
Buzz Blog

Aside from ideas to solve homelessness and affordable housing in the city—buzzwords we'll hear aplenty leading up to the August primary—candidates have gone through the playbook and spoken out on a few other topics near and dear to Salt Lakers.

Conversion Therapy Ban
Ahead of the city's recent Pride celebration, Q Salt Lake magazine asked the candidates about their thoughts on the LGBTQ community and Pride. One candidate's response—David Ibarra's—seemed to gain a little more traction than he initially anticipated. The local businessman said if elected, he'd pursue a ban on conversion therapy centers in Salt Lake.

"I didn't think it was really going to get all this attention because I just believed," Ibarra tells City Weekly. "I happened to make a reference to it in response to what Pride is and the next thing I know is I have Fox 13 coming to interview me ... to me, it was just the right thing to do so you just do it."

Ibarra's comments certainly drew attention after the Legislature failed to pass a bill that would have banned the practice statewide. Following the Legislature dropping the ball on conversion therapy, activists and allies spoke up, but a substantial bill banning the practice is still missing. What could a mayor do? The proposal seemed to be more of a statement than an actual policy proposal.

Mayoral candidate and current city councilwoman Erin Mendenhall told Fox 13 that, while she opposes the practice, the city wouldn't have the power to ban it because "no mayor has the legal authority to prohibit any business licensed by the state, such as therapists licensed" through the state's Division of Occupational and Professional Licensing.

Such a ban would have to originate from the state level. While a mayor could propose a resolution opposing it, it would lack enforcement through law.

Former candidate Christian Harrison, who is openly gay and a member of The Church of Jesus Christ of Latter-day Saints, said in the same report he sees it as more of a symbolic effort. Other candidates including Jim Dabakis, Luz Escamilla, David Garbett and Stan Penfold also included comments in support of a ban. Harrison dropped out of the race this week.

Ibarra, though, says he still wouldn't be deterred from pushing for it in office.

"I said as mayor, I absolutely will find a way to discontinue the practice of that absolute harmful therapy as quickly as I can," he insists. "Then all of a sudden, I get the 'Yeah, but you don't understand.' I hate sentences that start with 'but.' Sometimes it's just the right thing to do and you find a way."

Renewable Energy Goals
When it comes to Salt Lake City's air quality, candidates haven't let the smog bog them down either. In May, Biskupski said she was moving up the city's goal to operate on 100% renewable energy from 2032 to 2030. Garbett, a former attorney with the Southern Utah Wilderness Alliance, has campaigned on a 2023 goal since his announced candidacy. Days after the mayor's recent policy goal, Garbett was joined by fellow candidate Penfold in saying it wasn't enough.

"The science is clear: we must act sooner," the joint statement says. "The window of meaningful action is closing, and 2030 is too far into the future.

Is the idea just another bold campaign promise? Aside from waiting until 2023 for the public to find out, Garbett backs up his claim, citing 2021 as a crucial year. That year, Rocky Mountain Power will be renegotiating its agreement with the city to allow it to run its power lines throughout the city.

"They'll be coming to us and there will be an opportunity to say, 'In exchange for doing this for you, we want something from you,'" Garbett tells City Weekly. "Obviously, what we want is 100% clean energy, I'm talking about the goal the city has now, which is 100% offset."

In other words, a net 100% goal where the aim is to create enough "new renewable energy resources to meet all net annual" community needs, according to the city's website. Garbett adds that he believes it's the quickest and least-expensive option.

"I'm starting to feel more and more desperate about the need to do more aggressive things." —Mayoral hopeful Stan Penfold tweet this

Penfold, who has previously served on the city council, says he liked the idea because "we have to start behaving in a really aggressive fashion" when it comes to clean air. "Frankly, my big concern is all the new science about how bad our carbon emissions truly are," Penfold says. "I'm starting to feel more and more desperate about the need to do more aggressive things."

He also suggests that the city can do more to help its residents reduce their carbon footprint, such as more incentives for solar energy and electric vehicles. "I think it's our role to help provide options," he says.

The move, whether it happens in 2023 or 2030, will clearly cut down on the city's carbon footprint, but other factors such as an inland port and its pollution will likely be brought up as well.

"In addressing climate change and the way we power our city, because most of our power is produced outside of the Wasatch Front, it's separate from air-quality issues ..." Garbett says. "Since we're talking about electricity, the initial steps will be to reduce those carbon footprints, but moving in this direction, it will allow us to do things with the air quality problems we see in the valley."

There is hope for the Wasatch Front's air quality. For example, Kennecott Utah Copper announced just last month that it would permanently shut down its coal-fired power plant in Magna. The plant is the last one of its kind along the Wasatch Front and would cut down the company's carbon footprint by as much as 65%, according to The Salt Lake Tribune.

Hungry for more? Friday, June 8, is the filing deadline for the city's mayoral candidates, meaning more could join the fray or call it quits. In the interim, though, one thing is clear: Salt Lake City's next mayor better be ready to shift into overdrive starting Day 1.