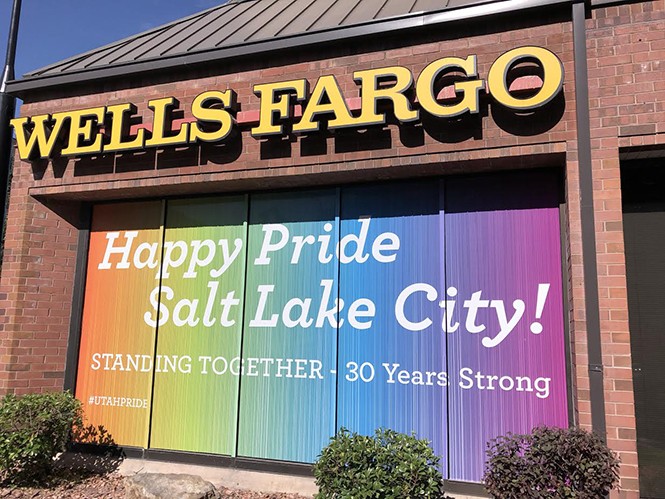 Busy week be damned, Hillary McDaniel knew it had to be done: the letter needed to be read.

"It wasn't just something to wait until after Pride and say, 'We'll do it next year,'" McDaniel, the Utah Pride Festival's entertainment director, says. "We feel like the corporations we're talking about really only care about the LGBT community during Pride Week."

Addressed to "Utah Pride Center Leadership and Whom it May Concern," the letter calls on the center to "immediately divest from Chase Bank and Wells Fargo as well as retract their parade entries for the 2018 Pride Center and the indefinite future." Alleging the financial institutions engage in discriminatory lending practices, the one-page message states the banks "have a history of exploiting communities of color, propping up companies that monetize the destruction of our environment, defy and reject indigenous sovereignty and exploit the poor and undocumented." The letter also calls for more diversity on the center's board of directors. If more people of color or members of indigenous communities had been on the board, McDaniel says, "these corporations wouldn't be in the parade."

"It's important to source our community funding from the community, and what represents the social justice interests of the community, not simply those folks who are economically empowered or members of racial majorities," Jocelyn Johnson, the Pride Festival's march and rally director, says.

"When it was announced Chase and Wells Fargo would be in the parade, I just looked around and thought, 'Why isn't anyone outraged?'" McDaniel says. "When you're trying to fight oppression, getting money from the oppressors is sort of a short-sighted strategy."

The letter's evolution was quick: Calling themselves "Queers Divest," McDaniel and five other members of the LGBTQ community wrote, sought feedback and sent the letter—all in a three-day time span—to the Pride Center's leadership the Tuesday before the festival. "This was just a way to start a conversation," McDaniel says.

More than 40 people and seven organizations signed the letter before the authors—most of whom are Caucasian, as noted in the letter—sent it to Pride Center leadership and local media. As of press time, 118 people have attached their name to an online petition.

Utah Pride Center executive director Rob Moolman met with Queers Divest members the week of Pride—local media called him for comment, McDaniel says, so the center "had to pay attention. They couldn't ignore it"—and heard them out, offering them a spot in the parade ahead of Chase Bank and Wells Fargo. "One of my roles as executive director is to make sure I am listening constantly, and trying to learn more about the important issues that affect both our communities and other marginalized groups, and to try to understand practical ways we should, or could, step in," Moolman says.

Moolman called the banks and discussed their options. Wells Fargo released a statement to City Weekly saying the bank remains "committed to Utah Pride and other local and national LGBTQ organizations, and we look forward to collaborating with them to explore how we best partner moving forward." JP Morgan Chase replied with a similar sentiment, and added that they "believe that reducing inequality and creating widely-shared prosperity requires collaboration of business, government, nonprofit and other civic organizations," adding that they aim to "maintain a culture that provides equal opportunities to all, and treats all of our employees, customers and members of our communities with equal dignity and respect."

Moolman stresses that corporations have made "incredible strides" in terms of their internal policies and support of the LGBTQ community, and that, aside from the financial benefit of allowing Chase and Wells Fargo to be sponsors, it was important to allow the banks to participate so they could celebrate their LGBTQ employees.

"Part of the Pride Movement has been, as Harvey Milk said, for people to 'Come out, come out,'" Moolman says, emphasizing that the more people and organizations participate in Pride celebrations, the better.

Moolman ended up marching with Queers Divest on the parade route. "Him marching with our group says a lot about him," McDaniel declares. The group staged a die-in—a demonstration in which participants lie on the ground, as if they're dead—a few blocks into the parade, to underscore how the banks are allegedly killing members of their communities with their economic policies and funding of companies that engage in environmentally harmful practices. Carl Moore, chairperson for Peaceful Advocates for Native American Dialogue & Organizing Support and Salt Lake City Air Protectors, offered a prayer song during the demonstration. Although not a member of the queer community, Moore says he participated because "when it comes to marginalized people, it's important we stick up for each other."

McDaniel acknowledges that many of the letter's authors are white, but "it's our duty to call out white supremacy when we see it ... People in these marginalized communities are doing this work all the time; they're just living this experience. I just think it's really important, whatever privilege you have, you need to use that privilege to make the world a better place for people who can't speak for themselves, or are exhausted from speaking for themselves all the time."

Moolman says it's too early to know whether the banks will be included in next year's festivities. He acknowledges there should be a discussion to determine who participates in the parade, based on a set of "fair and agreed upon criteria that will be applied across the board."

As for the issue of representation on the center's board, the South African-born Moolman calls that a "tricky question. What does diversity look like that is not tokenism?" He hopes a public dialogue has made people think about becoming board members, since there's an open call for board members on the Pride Center's website.

Moolman says he initially felt the letter's wording seemed confrontational, but once he talked with the group, he saw "the care for the center that was there, that was not articulated in that letter."

McDaniel says she has no qualms with the perception that she forced a dialogue. "This isn't the first time the conversation has been started with the Pride Center," she says.

"We're just moving this conversation out from behind closed doors because there was no progress being made. There were maybe some people nodding their heads, but no one was doing anything," she says.