Some from communities near Grand Staircase slam anti-monument legislation. 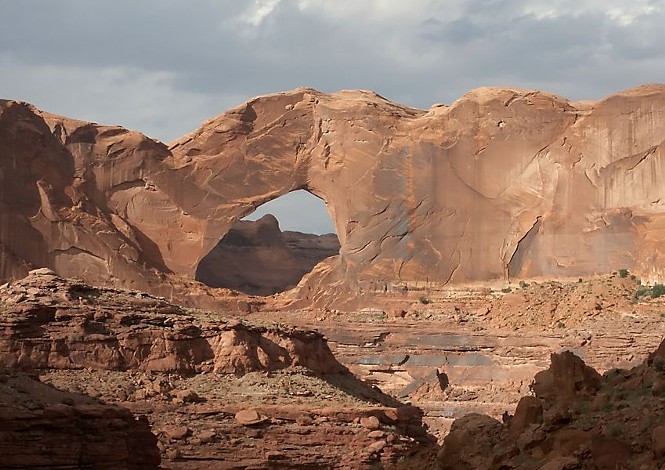 That’s the point a dozen southern Utah business leaders sought to make at the Capitol on Wednesday, countering what they said were inaccurate claims by some Utah leaders that the Grand Staircase-Escalante National Monument—located about 300 miles south of Salt Lake City—has stymied economies of surrounding towns.


The group of innkeepers, outfitters and guides who live and work at the foot of the monument slammed Utah lawmakers’ symbolic, non-binding legislation asking Congress to shrink federally protected acres surrounding the winding sandstone cliffs near the Utah-Arizona border.


“Grand Staircase has been wonderful, for Boulder, for the hospitality tourism sector along Highway 12,” said Scott Berry, of the Boulder Mountain Lodge. “It’s been the best thing to happen to that part of the world in the last 20 years.”


The Legislature and governor in February approved a resolution asking Congress to whittle the monument from its current 1.8 million acres, saying they believe the 1996 designation by then-president Bill Clinton hurt the local economy, scooped up too much land.


“That is a misrepresentation of our communities,” said Keith Watts, owner of Earth-Tours, which guides American and foreign visitors into the monument. “The growth industry is tourism. We’re doing great.”


But a return to more drilling and mining isn’t necessary to grow economies along Utah’s border with Arizona, the group from Garfield County said Wednesday, stressing that the new Bears Ears declaration also has potential to drive business in surrounding Monticello, Blanding and Bluff.


The group is urging national Interior Secretary Ryan Zinke and members of the public to visit them and see firsthand their buzzing businesses. The coalition has passed on to Zinke more than 100 letters of support from visitors and locals and is awaiting a response.


Mark Austin, a board member of the Escalante Chamber of Commerce who formerly ran the Boulder Mountain Lodge before selling it, said he wants to communicate to Zinke and Utah leaders that after the Grand Staircase declaration, “we saw an immediate jump in occupancy,”


The chamber doesn’t have current figures on the economic impact of Grand Staircase, Austin said, but points to prior reports demonstrating its impact. A 2008 analysis from the University of Utah, for example, found the service industry had become “a rather consistent area of specialization in [Garfield] County,” starting in 2001.


But critics of the monuments have pointed to a Utah State University study saying the county stood to suffer from reduced grazing under the monument.


Not so, said Blake Spalding, a chef and owner at Boulder’s Hell’s Backbone Grill. Her restaurant has grown almost faster than her staff can handle as more and more visitors have come to Grand Staircase.


“For us we’re seeing a boom,” said Spalding, whose cooks use produce grown next to the restaurant and meat from local ranchers. Her restaurant is nominated for the prestigious James Beard Foundation Award, which she believes is based on not on the food she serves but on her commitment to growing the community there by using local ingredients and providing jobs.


Spalding said she has rejected offers to open sister eateries in Los Angeles, Santa Barbara, Santa Fe and New York City, but would consider opening one near Bears Ears.


Berry, the current owner of the lodge adjacent to the restaurant, said the nonbinding resolution urging Congress to undo Grand Staircase is a message that Utah officials “don’t care about us. We are not taken account in the policies that they advance.”


The governor’s office did not immediately have a response.