A look at liquor’s hold on the Utah Legislature this year. 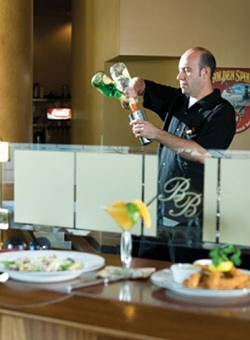 First, legislative leaders in January said they were drawing up a plan to take down Utah’ tallest liquor law and raise another barrier to booze: a higher tax on liquor in order to fund prevention programs.


Then they made public a bill introducing a possible replacement to the Zion Curtain: a 10-foot buffer zone blocking minors from sitting near the bar. The measure’s sponsor on Monday called and quickly cancelled a news conference on the proposal.


Now, Utah’s drinking population and its restaurant owners are left wondering what, if anything, will succeed the Zion Curtain, a 2009 legislative construct that has miffed tourists and forced eateries to reconfigure their floorpans.


Brad Wilson, R-Kaysville, said the draft of his bill released Monday is a good start.


“We’re basically giving [restaurants] another option. You can keep it in place. If you want to take it down, you can create this buffer zone,” Wilson said.


But the measure has yet to have a hearing, and the Legislature is running out of time. The 2017 session ends March 9, which is next Thursday.


The bill has support from Gov. Gary Herbert, who has said he believes it’s time for the state to dismantle the barriers shielding bartending from guests. Herbert earlier in the legislative session noted the law only applies to restaurants built after 2010—a provision written into Utah law after legislators allowed bars to open to anyone, not just members who paid dues.


Herbert said he gave the LDS church a “heads up” on his position, before announcing it in his January address at the opening of the session.


And the church, for its part, has publicly stayed quiet on the issue. It’s a big difference from 2014, when they released a sweeping webpage with videos, illustrations and text defending Utah’s liquor laws.


Still, the proposal invited mocking, with some calling the buffer a “moat.”


No matter what you call it, it’s a good idea because it would apply to all restaurants, Senate Sponsor Jerry Stevenson, R-Layton, told reporters this week.


“I really believe if we can get this passed it creates much better policy for the state of Utah,” Stevenson said.


Aside from the Zion Curtain, lawmakers also are moving toward lowering the legal blood-alcohol limit while driving from 0.08 percent to 0.05—about three drinks in an hour for a 160-pound man.


If the Legislature passes the measure from Norm Thurston, R-Provo, Utah would be the first state in the nation to heed the recommendation from the federal transportation board, which has advocated for the change. The bill awaits final approval from the full Senate and governor.