‘I Don't Want to Live My Life in Fear Anymore’

When West High School senior Abena Bakenra enters a school classroom, her eyes dart around looking for the best place to hide in the event her school were assailed by a murderous gunman.


It’s a gut reaction she wishes she didn’t have. But as politicians stall in passing meaningful laws to address the growing number of school shootings, students are left to wonder whether their campus will be next.


“I don’t want to live my life in fear anymore and neither should you guys. We need to stand united as students and say enough is enough,” Bakenra said to an estimated 600 students who gathered Wednesday on West High School’s front lawn as part of a nationwide student protest. “Today we gather here to show our schools, our administrators and mostly our politicians that we are tired of their inaction,” she continued. “We will take the steps necessary for this not to happen again.” 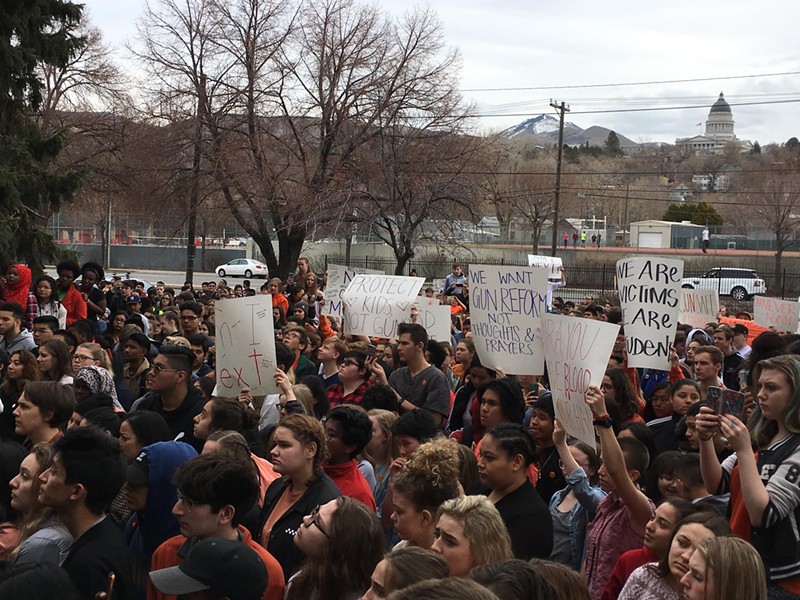 “I want to be clear: This is just the beginning. Today, by walking out, we show our leaders and our lawmakers that we are watching and we are listening and we demand change” –West High student Elizabeth Love tweet this

That same morning, students across the country participated in a mass walk-out in response to a Feb. 14 school shooting at Marjory Stoneman Douglas High School in Parkland, Fla., where 17 people—mostly youths—were fatally gunned down.


West High students read off the names of the 17 students and adults who lost their lives and released one orange balloon into the air for each death in that mass killing.

“Teachers should not be burdened with the responsibility of owning a gun and the possibility of using it against one of their own students,” one student said. “Being a teacher should not mean agreeing to take lives. We want guns to be kept out of classrooms whether that pertains to teachers or students.”


Students also advocated for tighter background checks for those attempting to purchase guns and outright bans of “military-grade” weapons like AR-15s and devices like bump stocks.


Elizabeth Love, a West High senior, concluded the rally—which had been observed in solemn reverence—with an impassioned speech.


She encouraged fellow classmates who are 16, 17 and 18 years old to pre-register to vote.


Students were then asked to return quietly to class. Those who made it to their desks before the second-period bell would be marked present. A follow-up march is scheduled at 11 a.m. on Saturday, March 24. Students will gather at West High then march to the Utah State Capitol.