Against archaic regulations, these Utah distilleries manage to leave their boozy mark. 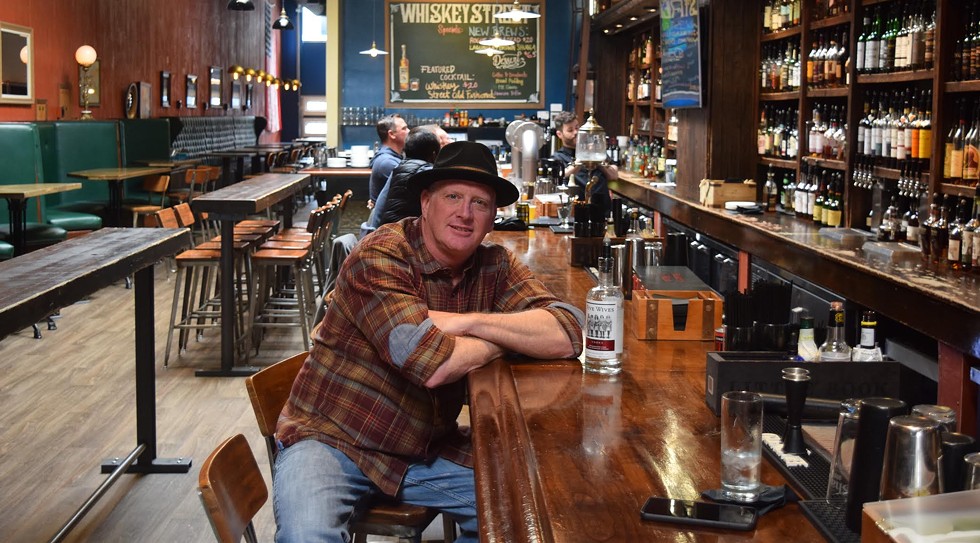 Ten years ago, Steve Conlin sought out to claim a chunk of the $230 billion national alcohol market. Perhaps if he struck gold by creating the next frat boy spirit du jour, he'd soon be sipping mai tais beachside, ruminating on his next million-dollar idea. In reality, the road to creating and growing Ogden's Own Distillery was a bit rockier.

Initially, Conlin was trying to sell something he thought would be the next Jägermeister—an herbal liqueur known as Underground. When that didn't take off with as much speed, he made adjustments. Enter the now well-known products rooted in Utah lore such as Five Wives Vodka and Porter's Fire.

Still, amid the state's restrictive regulations and consumer interests, the gin, liqueur and vodka peddler soon will break ground on a sprawling 30,000-square-foot facility and launch the company's 10th product, a rye whiskey. And he isn't the only craft distiller expanding in Utah. Within the past decade, more and more distilleries have opened, including in under-the-radar towns like Moab and Eden. Last month, Beehive Distilling announced its expansion in South Salt Lake, complete with a 4,000-square-foot bar and customer space. Contrary to the easy blame-it-on-the-DABC mantra, some distillers say the state's liquor control hasn't hindered their growth as much as some might initially think.

"It's a growing market," Conlin says about the state. "People are moving here and arguably, I'm not sure of the statistics, the population here is becoming more of a drinking population ... there's an increase in drinkers overall."

Utah and Booze
A complicated relationship.
By the time Mormon settlers peered down into what would become known as the Salt Lake Valley and spotted a large lake too salty to bathe in, they probably longed for a stiff drink.
By Dylan Woolf Harris
News


Currently, there are about a dozen distilleries in the state. It's far below the number of breweries that have opened—seemingly every month these days—but the craft distilling growth could be a sign of the latest trend.

Take a stroll along West Temple in South Salt Lake and you can see it for yourself. The craft hub is home to breweries like Shades Brewing, SaltFire Brewing Co. and the newest Level Crossing Brewing Co.; and it's also site of the Beehive and Sugar House distilling operations.

"I think the spirits industry is about 20 years behind and maybe a little behind in the state of Utah for cultural reasons." —New World Distillery's Ashley Cross tweet this

Chris Barlow, a partner at Beehive, says the business is waiting on its bar license approval from the Department of Alcoholic Beverage Control, but the expansion has been welcomed with open arms. Noting a change from the top, he says the city's mayor included a supporting letter in Beehive's application.

"South Salt Lake is super excited about it," Barlow says. "I can stand on my front porch and see all of those buildings ... South Salt Lake is really trying to push it to be a fun little walking area—we border the Trax line; there's a bike path right next to us."

And Barlow says the state-controlled system even helps small operations like his. Beehive still has to apply for a number of permits, however, such as a manufacturing license, a package agency license (known as Type 5) and the new bar license.

"It is what it is," Barlow says about working with the DABC. "Every state has weird shit."

The distiller says Beehive is most successful in Utah because the way the state system "is set up to deal with small distributors like me."

"If you're under a certain volume of alcohol sales a year, the DABC doesn't mark my product up as much as they mark up a big player like a Bombay Sapphire," he says. "It's the same for breweries, wineries, everybody, so I can sell at a higher wholesale point and at the same retail price point and have a bigger margin—that's very unique."

However, not all see a rosy distilling climate in Utah. Ashley Cross, who founded New World Distillery in Eden more than two years ago, says that while she doesn't regret how they've grown their operation and marketed it as a destination outing, the only thing she'd change is to do it in a different state.

"I kind of throw up a little bit in my mouth any time I really think about them," Cross says about the DABC. "It's a real challenge."

The stodgy department, of course, is a distilling company's only option for distribution in the state. Businesses can sell product at their own locations, but are required to have the correct licenses and report sales to the department. If they want their product in bars, the bar has to purchase it for the same price a consumer would from the DABC.

For a smaller operation such as New World's, they also have to worry about their products' demand and if it's selling well.

"The expectation that a small craft distillery is supposed to present the same sort of sales data as a large commercial big booze company is unrealistic, and yet that's a constant threat, because the DABC threatens us with de-listing a product if you can't hold your own next to a big booze product," Cross says.

Terry Wood, spokesman for the DABC, however, says de-listing a product comes down to consumer demand.

"If we have 100 [products] in the vodka category and they are ranked by demand within that category, we may drop the bottom five," Wood tells City Weekly via email. "But we also look to see how long a product has been on the shelves and if it is trending up or down. The decision to de-list considers several factors, including price band and it helps us keep product on the shelves that customers are buying."

"I think the spirits industry is about 20 years behind and maybe a little behind in the state of Utah for cultural reasons," Cross says. "We have some catching up to do because people don't know how to read a production statement on the back of a bottle ... they don't know how to interpret labels so they can be smart consumers and understand to which degree they're supporting a local product and not supporting big booze. Yet, you talk to a beer geek and they can tell you all of that."

Locals like Conlin foresee nothing but growth ahead. The avid photographer even goes as far as to say Ogden's Own won't look the same in as little as two years with his company's anticipated growth both at the brick-and-mortar location and in new products. But he's still curious to see how the craft distilling world changes.

"I think what happens is the drinking population is more willing to go out and experiment with beer than they are with spirits," Conlin says about appealing to consumers. "It will be interesting if the distillery trends hold out and match up to the craft-beer trend."