Youth shot by police near the downtown shelter struggles to rebuild his life.

Abdi Mohamed's body bears the brutal scars of his interaction with the Salt Lake City Police Department outside the downtown homeless shelter on February 27, 2016.

Along with the five entry wounds—one into his back, two into his ribs, one gouged wheal on his side and one on his upper arm—there's also the surgical scars that run from crotch to sternum and then across and around the upper right side of his chest where doctors sliced him open to save his life.

One bullet was an inch away from his heart, says the softly spoken 18-year-old. "I'm alive. I could have died."

He lies on his side, rubbing his back from the pain. One of the rounds fired by two Salt Lake officers after they ordered Mohamed to drop a stick—either half a broomstick according to Mohamed, or a metal rod according to the police—fractured his spine. He can feel his legs; he just can't move them.

Mohamed does not understand why the two officers shot him. "They didn't have to, like, shoot me because I had a broomstick in my hand. They had many options; they had tasers, batons, they could have used other results, instead of shooting a 17-year-old kid with a broomstick five times, you feel me?"

Both officers were put on paid administrative leave and are now back on duty.

Mohamed has become a polarizing figure in the ongoing local and national debate over police brutality that has convulsed both law enforcement and sectors of the public for several years. For some he is a victim of police brutality, and even racism, while for others he is a suspect, one of two youths who were described by Salt Lake City Police Department in their statement released the day after the shooting as beating a defenseless man. "Officers confronted the two suspects and ordered them to drop the weapons. One of the males complied and dropped the weapon, the other continued to advance on the victim and was shot by officers ... "

Mohamed has never told his side of the story before. He wants people to, "get it from me because I was the one there." He disputes the police's account of what happened and while he says he does not know if the officers who shot him were racist or not, he believes they were wrong to use deadly force. "I honestly think police should not use weapons like guns and stuff on kids. That's just wrong; especially when the kid doesn't have a gun."

On that night, Mohamed says he was at 300 Rio Grande Street visiting homeless friends staying at the shelter. "That day I was there, me and my friends were going to go to a party." He acknowledges that the shelter is dangerous, but "I know a lot of people, I'm not scared to go down there. When I go down there, I know I'm safe, I'm protected."

That night, Mohamed says he was intoxicated. He and a friend got into an altercation with a man. "I don't know if he was drunk or high, he was like freaking on us." Mohamed then heard someone yell, "'Drop the stick.' As soon as I turned around, I just went black."

After the shooting, around 100 police in riot gear from multiple jurisdictions faced an angry crowd throwing rocks and bottles. What followed was a brief media firestorm locally, nationally and internationally.

While media attention waned, the ordeal for Mohamed's family was just beginning. Mohamed says his family members were repeatedly sent by the police to hospitals where he was never admitted. When his family found him, they were not allowed to see him because he was in police custody, even though he was in a medically-induced coma. "My mom was pissed off she couldn't see her son when he got shot," Mohamed says. "That's kind of messed up." 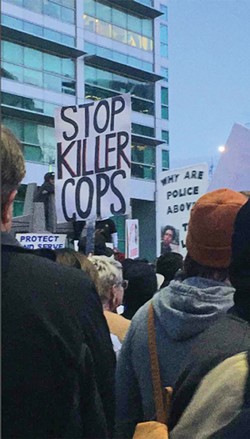 The Utah Juvenile Defenders Office has represented Mohamed on multiple juvenile court issues. Its executive director Pam Vickrey has no explanation for why access was barred to both members of the Mohamed family and Alicia Memmott, Mohamed's attorney from their office, noting it was unprecedented in her experience.

The Salt Lake County District Attorney's office is investigating Mohamed's shooting, one of five open officer-involved shootings it currently has under way. DA Sim Gill says his office doesn't comment on juvenile court issues, but that in this case the issue of who had right of access to the minor was unclear, so they sought clarification from the court. Vickrey says her office "filed a motion to allow legal counsel and his family to have visitation and the motion was granted."

Mohamed came out of the coma two weeks after the shooting. For his April 3 birthday, the nurses gave him a cake. He was released on April 12.

The incident echoes several other recent and controversial Salt Lake City Police Department officer-involved shootings, notably the killings of a man wielding a snow shovel and an unarmed man outside a 7-Eleven. But despite the police body camera footage captured at the shooting not being released, the initial public outcry over Mohamed's shooting has largely died out, bar several demonstrations by Utahns Against Police Brutality.

Vickrey, like many others, wants to see the body cam footage released. "We have a young man who suffered injuries which may impact him his entire life and there is a video which could explain how this happened."

While no information has been released regarding the officers who opened fire, a fragmented portrait of Mohamed that the youth says is a mix of inaccuracies and prejudices has emerged in the media. Parts of that media portrait have been gleaned from relatives, witnesses at the shelter, the Salt Lake City Police Department statement blaming Mohamed for the shooting, and an arguably inflammatory picture from Facebook of the minor sporting "bling."

Because of the publication of that image, he says, "People said I was in a gang, just because I'm on Facebook wearing red or blue. They just jumped straight [to me] being in a gang because they didn't know anything about me."

What upsets him most, though, is the decision to release his juvenile record by the Administrative Office of the Courts [AOC] to The Salt Lake Tribune, following the shooting. In a news story ["Second Chances," March 24], City Weekly looked at how the release of Mohamed's court record cast a shadow over the confidentiality of the juvenile system.

"They didn't ask anybody, they just released it, they let the whole world know about my past, all the wrong I've done, all the mistakes I've made," Mohamed says. "Now everybody knows it and I think it should be confidential. Nobody released any information on the cops and they had no right to release any information on me."

Rather than the AOC's decision, Mohamed's civil attorney, Ryan Hancey focuses his ire on the police statement which came out shortly after the shooting. "They put a spin on a story that hasn't been investigated. I don't think it's responsible to do that," he says.

A Salt Lake City Police Department spokesman declined to comment on Mohamed's story, citing departmental policy prohibiting comment on active investigations. The Unified Police Department, which is independently investigating the shooting prior to turning over its findings to the DA, also declined to comment. Salt Lake City mayor Jackie Biskupski "wants a full accounting of the event," says her spokesman, Matthew Rojas, noting that Gill has made it clear "the video will be made public."

With Mohamed as yet facing no charges—prosecutors have said in court they intend to file charges several times—the Utah Juvenile Defenders office's Vickrey says her office is focusing "right now on making sure he has access to appropriate medical treatment, legal counsel, family support and that he is being cared for both physically and emotionally."

Mohamed says he's prepared for what may come if the DA does pursue charges. "I don't know what they are going to charge me with. I didn't do anything. I know I didn't."

Mohamed was born in a refugee camp outside Nairobi, Kenya, in 1998 to Somali parents who fled their homeland. He doesn't have any memories of his life there, moving to Utah at age 5 with the help of an international refugee agency. Life in the States was hard, he says, especially after he began to get into trouble at age 12. He was in and out of juvenile court. "I try to fix it in my own way and usually it never works out," he says. "I always end up messing up; making the situation worse for myself."

He says that he's made mistakes. "I never got involved in drugs, I never sold drugs, but I'm not going to lie, I've used them before."

While Mohamed says he associates with gangs, he is not in one. "Gangs are like my family," he says. "One day I just ended up in the streets and then I liked what I saw, how everybody treated me with respect." Some people look at gangs "and jump to conclusions that they are drug dealers and bad people. Not everybody in a gang is like that. I know a lot of gang members don't do that stuff. It's all about respect in the gang system."

The youth says there are things he's done that the world doesn't see. Helping a homeless man by buying him a meal at McDonald's, helping an old lady carry her groceries to the bus stop. "Even in [juvenile detention] when I was locked up, I didn't cause any riots. I never caused problems."

While he waits for an operation to repair his spine, he still manages to get out with his family by using a wheelchair. He plans to buy crutches so he can walk, but either way he knows that he still has to deal with questions in public about what happened. "Every time I go somewhere with my mom, people ask me 'Aren't you the kid that got shot?' They question you, then you get irritated. 'Bro, leave me alone, it's my problem, not yours.'"

He feels that the police have tarnished his reputation. Society, he says, "automatically thinks you're a bad person because you got shot by the cops. Honestly I think the cops put out a bad reputation for me. Now I got everybody thinking I did something wrong, when honestly I'm the innocent one."

After he recovers and puts this behind him, he wants to be a probation officer. "I've been through the juvenile system. I know how it's hard; it's hard for the kids."

He worries that his past will haunt him. "People don't realize that whatever you do in life it always comes round, keeps on going round and round till you die. Everybody wants to break their circle, but when the media and the police are over there making you look bad, it's hard to walk away from it."

Mohamed slowly maneuvers himself into an upright position to be photographed. He has to pick up and shift his thin legs from the left to in front of him before he is ready.